You are currently browsing the archive for the Restaurants category.

For the final days of our trip, we had to cover a lot of mileage, but we still managed to fit in a few interesting stops along the way.

We spent the day driving 568 miles east across the pan handle of Texas, Oklahoma and Arkansas.  The drive and scenery were uneventful.

Hot Springs National Park is essentially main street in Hot Springs.  It is a row of bath houses that draw on the natural springs in the area and were once very popular in the 1800’s before modern medicine. 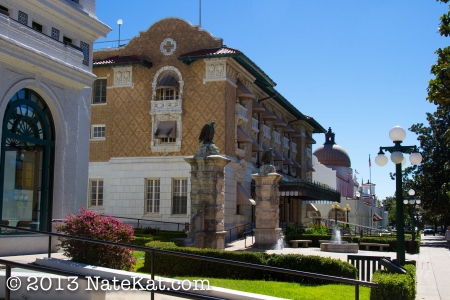 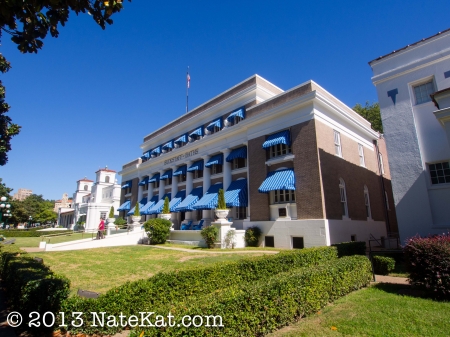 The many springs in the area are combined into one supply producing over 750,000 gallons per day.  The water temperature is about 143F and is potable without additional filtering and is publicly available at several fountains.

We tried some of the water, but because it was so hot it took a while to cool off.  We spent the day walking up and down the main street, but weren’t able to explore the visitor center / museum because the federal government was still shutdown. The privately-run bath houses were open, so Katharine was able to try one of the traditional treatments. It was an interesting experience, but not something she’d want to do on a regular basis.

Overall, Hot Springs was definitely our least favorite National Park, which is not surprising given that it really seems like it should be a National Historical Site. After a few hours we were ready to leave Arkansas and head to Tennessee. We decided what better place to stop for BBQ than in Memphis.  We ended up at Corky’s BBQ, which did not disappoint.  We ate a full rack of baby back ribs along with hushpuppies, baked beans, coleslaw and pie for dessert.  Not only was the food amazing, the prices were low, and the, service was prompt, humorous and refreshing.  We knew our trip was on the right track again as we left for Nashville

Considering Nathan enjoys the occasional Jack and Coke what better place to visit than Jack Daniel’s Distillery in Lynchburg, TN.  It’s about 90 minutes outside of Nashville, but it’s a beautiful drive through the Tennessee country side, which was dotted with well maintained horse farms.

We didn’t know much about how Tennessee sipping whiskey was made until after our extensive, entertaining and educational tour. Our guide, Jason, took us through the process and history of Jack Daniels from the original iron-free cave spring water that is still used today to the building that houses the barrels of whiskey. 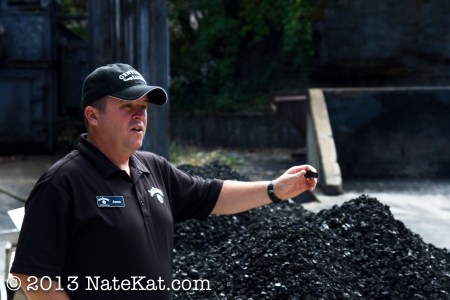 The tour was memorable and we still try to impersonate Jason and his Tennessee accent while saying “Our whisky mellows through 10 feet of sugar maple charcoal, because we aren’t making bourbon here… we’re making Tennessee sipping whiskey”. 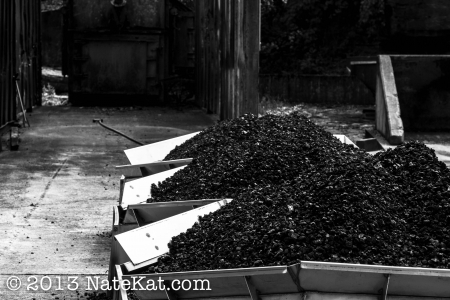 The amount of history you learn on one of their tours is amazing.  You can’t take pictures inside their distillery, but you can outside where they make their own charcoal. 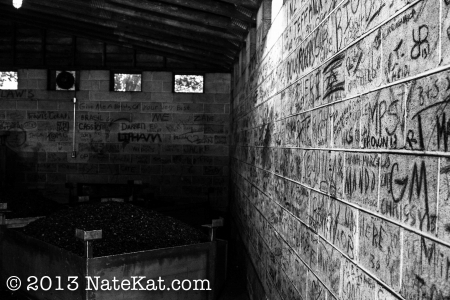 They also still have an REO speed wagon, which was once part of their on-site fire department.

You also learn about Jack’s stubbornness to go to the doctor after kicking his safe, which would later lead to his death. 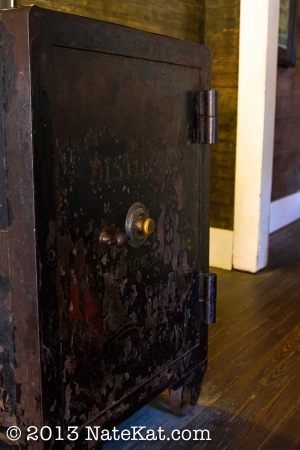 At the end of the tour, we enjoyed a small tasting of different varieties of JD whiskey. We are now loyal Jack Daniel’s customers and whenever we order whiskey we think of our visit to Lynchburg. 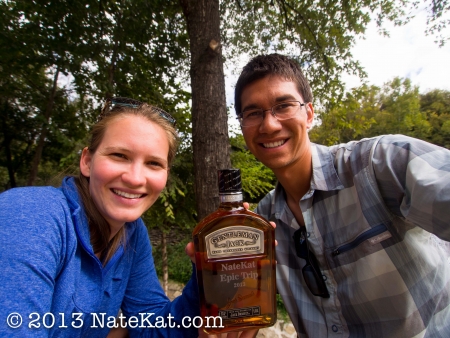 We then headed back to Nashville and stood in line outside the Bluebird Cafe.  For those of you into country music (or watch the TV show Nashville) you know the Bluebird is a well known cafe/ bar where musicians like to frequent to try new music and play in a round.  This unique style puts the musicians in the middle of the room while everyone else enjoys dinner and drinks along the outside, but it is a small and cozy space only fitting a hundred people or so.  We enjoyed the evening listening to Pam Rose, Lisa Carver, Liz Rose and Jill Johnson.  They sang some of their old classics while trying out some new songs.  It was refreshing to see four talented women singing and playing acoustically for fun instead of large scale produced concert.  We loved the experience and hope to find more opportunities to hear live music in a small setting.

The next morning we drove 175 miles north to Louisville, KY.  The original plan was to visit Mammoth Caves National Park, but with the government still shutdown, we enjoyed an afternoon walk along the waterfront of the Ohio River. 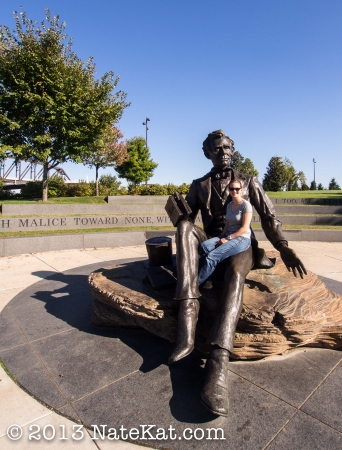 It was a perfect day for a walk as we strolled across a old rail bridge that was refurbished into a pedestrian bridge connecting Kentucky and Ohio.  The renovations weren’t quite finished so we couldn’t step foot in Ohio to add another state to our list. 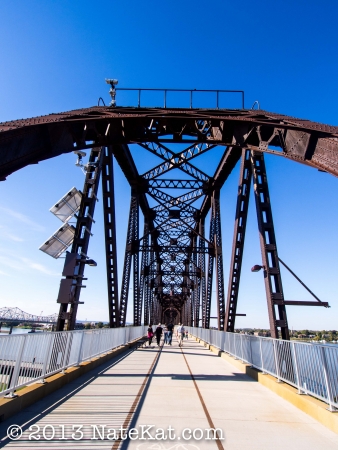 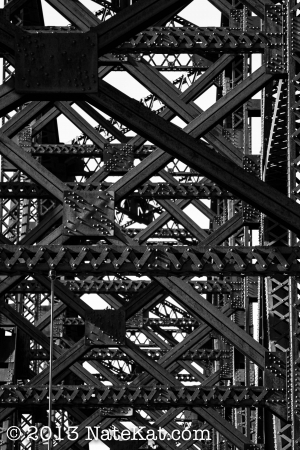 We enjoyed some fine dinning and Kentucky bourbon while we reflected on the trip as it neared the end.

We drove 130 miles from Louisville to Natural Bridge State Resort Park where we took a ski lift and a short hike to see the unusual rock formation. 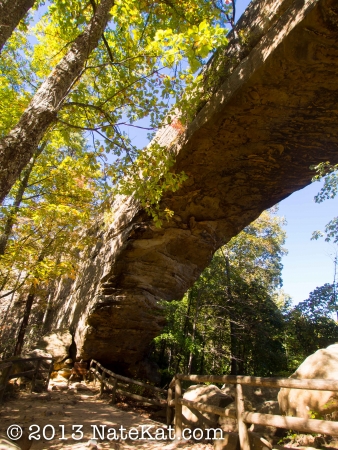 Under the Natural Bridge 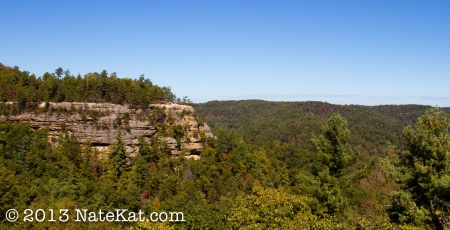 On Top of the Natural Bridge Looking Toward Lookout Point

The hike was short since we had to get back on the road.  We then drove 600 miles through Kentucky, West Virginia, Maryland, and a corner of Pennsylvania!  We arrived late that night / early the next morning completing the Epic Trip just in time for Will’s (our nephew) 1st birthday party!

It was crazy to think that the trip was finally over… luckily our photos and memories will last a lifetime! 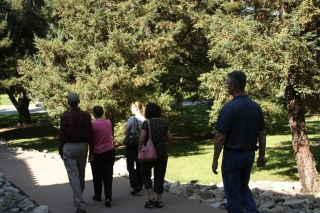 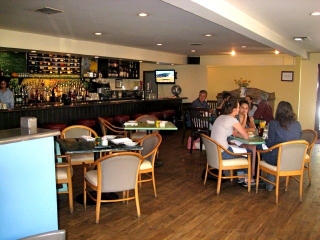 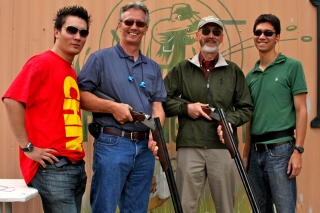