You are currently browsing the archive for the Oregon category.

After seeing the sunrise in Crater Lake, we started the drive back to civilization. Our first stop was in Eugene to visit a friend of Katharine’s from her study abroad semester and Fulbright year in Germany. It was great to catch up with Eleanor and meet her fiancé… sadly we completely failed to get a photo!

We continued on to Portland to see Katharine’s cousin Nancy. Nancy and Bill welcomed us into their beautiful home overlooking Portland and Mt. Hood with a delicious dinner and great conversation. They had just finished a remodel of their deck, which turned out beautifully and was a perfect place to relax in the evening.

View from the deck

That night we very gladly slept in a comfortable bed and managed to catch up on some sleep from the night before. In the morning we were again treated to a breakfast feast and then headed out for an adventure in Portland called the 4-T’s trail. The trail is actually a combination of Trail, Tram, Train, and Trolley and makes for an interesting way to explore the city. We started by hiking in the woods for a couple miles, then took a short tram ride down from the top of a hill, then took a trolley (street car) to downtown. 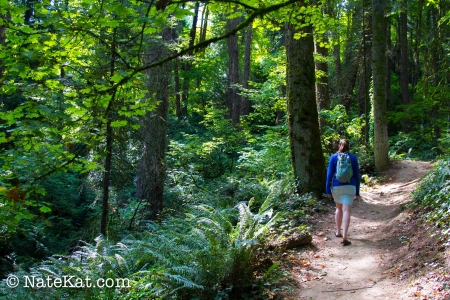 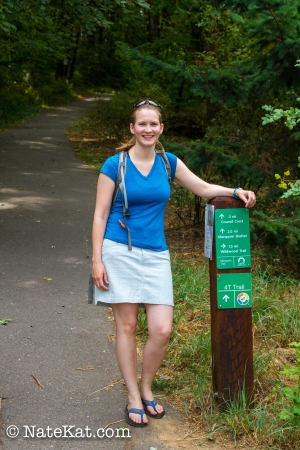 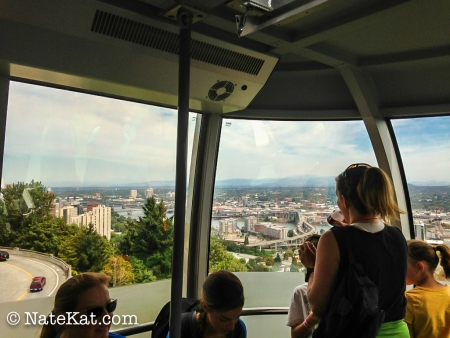 Once we got downtown, we checked out Powell’s books and did some people watching. Then we walked to Voodoo Donuts, a classic stop in Portland. We met up with Nancy there and got a couple crazy donuts for the road. The maple bacon was delicious and the traditional voodoo was surprisingly good despite the rather gruesome shape. 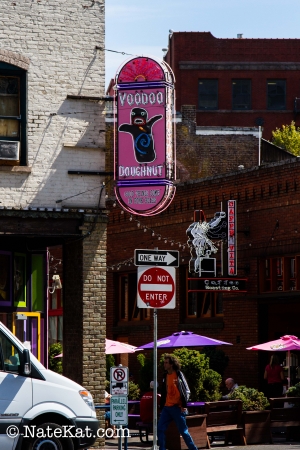 We had a great short visit in Portland, we definitely wish we had more time to explore the city and the great hiking around it. 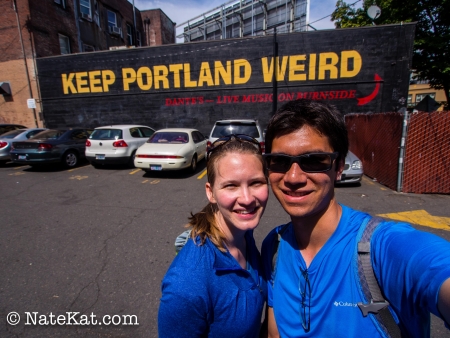 We are currently driving from the Seattle area to Glacier National Park in Montana after over a week in Washington. It’s our first time we will be driving more than 8 hours in one day for the whole trip so far!

After 15 days in California, we finally crossed into Oregon! We noticed the first major difference when we had to stop to get gas… Oregon is one of the 2 states that does not allow you to pump your own gas, an attendant must do it for you (NJ is the other state). When we first pulled up Nathan realized he was at a full service pump and almost started to move the car to a different one when we kind of realized they were all full service. It was a bit awkward and clumsy the first time… we forgot to open the gas tank door, we almost forgot to tell him premium fuel for the Subaru, and we had to stay focused so as not to drive away before completing the transaction. But by the end of our time in Oregon, we kinda got used to it, and one guy cleaned our windshield better than at the car wash so that was nice.

Our first real stop in Oregon was Crater Lake. We managed to make it to Mazama campground before dark (barely) which was good because the campsites were really tightly packed and the last bit of light helped us select our tent position. We would have had a very comfortable night for sleeping, but the couple next to us had a baby that cried through the night and kept Nathan up… Ever since then we feel like several of our campgrounds have had crying babies, so we are hoping this does not turn into a pattern!

We really only had one full day to spend in Crater Lake, so we decided to drive the loop around the lake and make stops at the viewpoints, ending at Watchman Peak, a nice location for sunset.

Our first stop on the loop was Vidae Falls before we even saw the lake itself. It’s a quite impressive little waterfall right by the road, and the flowers were blooming all around. 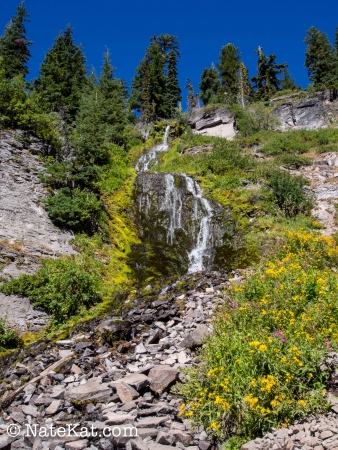 As we wound our way up to the edge of the lake, the mountains on the other side of the road caught our eye, with a really nice layering effect in the morning light.

Finally we saw the lake and its amazingly blue water. All of our photos show the blue as it really was, not enhanced to saturate the blue color. The lake is incredibly deep (approximately 2000 feet deep, the deepest in the US) and the water is also the cleanest. Since the lake is in a collapsed volcano, the rim of the lake is elevated above the surrounding terrain and so no rivers flow into it. The only source of water is rain and snow falling directly into the lake. The depth and clarity make the water look so blue. 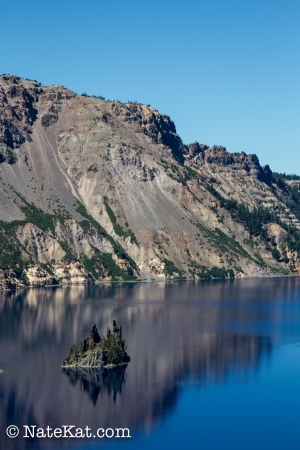 From there the Rim Drive veers away from the lake and we took an offshoot to visit the Pinnacles, more remnants of volcanic activity. 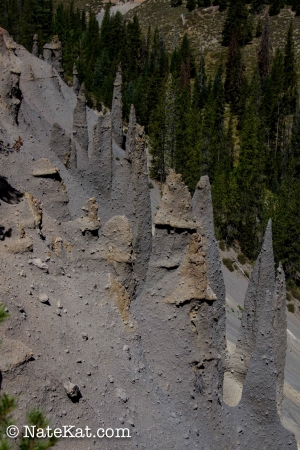 We continued driving counter-clockwise around the lake stopping at view points along the way for different angles of the lake. 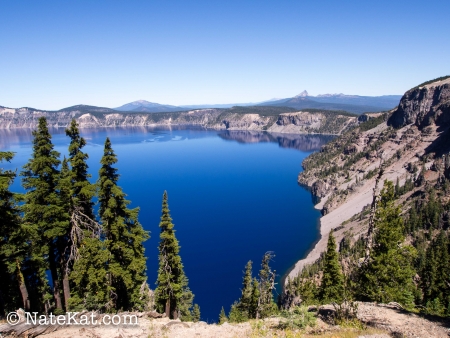 By afternoon we made it to Cleetwood Cove, the only access to the surface of the lake. We hiked down the steep slope (~1.1 miles, 700 ft) and walked past the boating area to a cropping of rocks that wasn’t too crowded. Some people were swimming and we were determined to do so as well even if the water was freezing. The water was definitely very cold (the deeper areas are 48 degrees year round), but the surface layer was warmed by the sun and it actually felt quite a bit warmer than the pools in Yosemite. So we each did a quick swim… although it took Katharine about 30 minutes of wading before she worked up the courage to take the plunge. 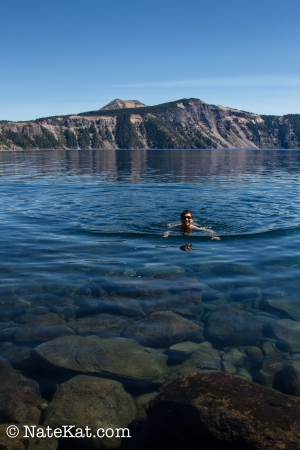 After we finished swimming and were mostly dry, a wind started to pick up, making it feel much colder… we were glad we swam when we did! We explored the area a little more and found a pretty high rock that people were jumping off of… people braver than us, that’s for sure. We watched an entire family do it one at a time… first the father, then three kids ranging in age from 10 to 16. We were impressed, but a little nervous that they were only barely jumping far enough to clear the rocks below.

We prepared ourselves for a slow hike back up to the top, but we actually made it back up in less than 30 minutes, which gave us plenty of time to make our way to our next stop. We had decided that we wanted to climb to Watchman Peak to get a nice view of the whole lake for sunset. The sky gave us a pretty nice show and the vantage point definitely seemed to be best, giving a sense of the shape of the lake and including Wizard’s Island. 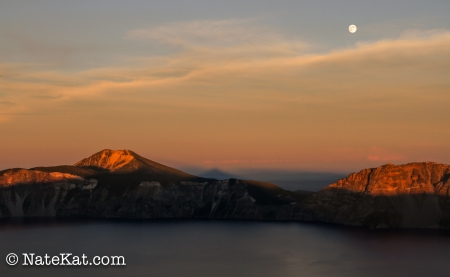 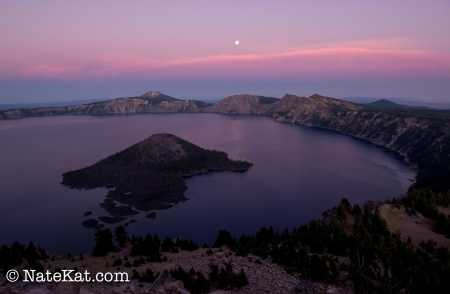 Since we had been living in the outdoors for the last couple weeks, we knew the moon was going to be nearly full.  As for all sunrise and sunset photography sessions, we packed our warm clothes and headlamps and arrived early to get a good tripod location. Soon after we arrived at the top, others started trickling in until the overlook area was quite crowded. After the sun set, the moon quickly rose over the horizon.  The audience was captivated by the bright moon, oohing and ahhing, but they soon realized it was getting cold and dark fast.  We were glad to have our jackets and headlamps for the hike down.  On the way down we listened to a traveler from Alabama who takes a 3 week long vacation each year to visit various regions of the US.  It is always interesting how the National Parks can intrigue people (including ourselves) so much that they dedicate a decade of vacations exploring the US.

We drove to a picnic area to make a quick dinner while we waited for the sky to get dark enough for some night photos. The moon was nearly full, so we couldn’t capture the stars very well, but the moonlight gives a different feel to the lake. 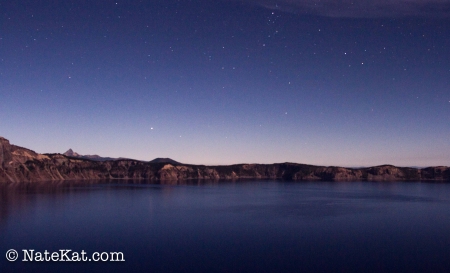 By the time we got back to our campsite it was nearly midnight (and the baby was still awake). Even so, we planned to get up for sunrise the next morning. We succeeded and were the first people at the lookout point. This is proof that given the right conditions and encouragement (and promise of hot breakfast at the local restaurant), Katharine really can get up early if she puts her mind to it!

It was a beautiful sunrise and a great way to end our stay in Crater Lake. We enjoyed a great breakfast at Annie Creek Restaurant, then packed up our stuff and headed on to Eugene and Portland.