You are currently browsing the monthly archive for April 2015.

We had an incredible 2 week trip to Patagonia in mid-February.  It’s taken us the last month to get through the 2,241 photos! Here’s a look at the first part of our trip, backpacking in Torres del Paine National Park in Chile.

We took 3 planes and about 24 hours to reach Punta Arenas, Chile near the southern tip of South America. The only Spanish we knew was what Nathan could remember from high school and what Katharine learned from an app in 2 weeks.  We then took a bus to a smaller city, Natales (Puerto Natales), which is the town closest to Torres del Paine.  It is common to see people walking the streets with their backpacking gear, and the restaurants are filled with young people trading stories about their latest adventures. 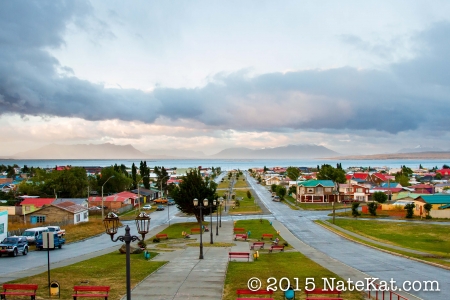 View of Natales from a Hilltop Near the Bus Station

We saw tons of guanaco in the pampas (plains), while riding on the buses throughout the trip. 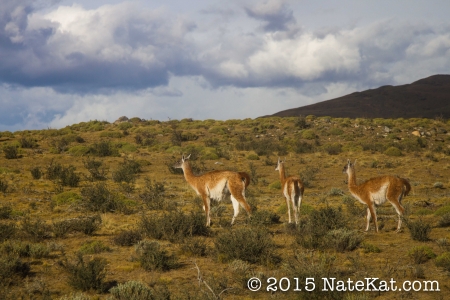 We attended a free info seminar at the Erratic Rock hostel, which made us feel a lot more comfortable about what to expect on the backpack and provided a lot of good, detailed information (plus some that we found not so accurate) and it gave us a chance to ask some logistical questions which was a relief.  We spent the rest of the day buying dried fruit, nuts, and other backpacking food at the local markets and stores since Chile is really strict about bringing food into the country.

We decided to do the W-Circuit from left to right, in 4 days and 3 nights.  First we took a bus from Natales to Torres del Paine, which takes about 4 hours. Then we took the ferry across Lago Pehoe to Refugio Paine Grande.  Normally this ferry only makes one trip across the lake, but the bus companies sold more tickets that people could fit on the one ferry.  We had to wait for the ferry to make a round trip and comeback and pick up about 50 more people.  This set us back a few hours. 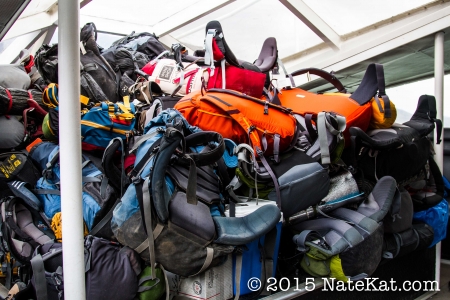 This is all the backpacks piled up on the ferry.  Keep in mind this ferry was only half full and the pile is still 15 feet deep.

Torres del Paine has numerous refugios (transl: shelter or refuge) along the trail, which are essentially privately-run hotels/hostels in the wilderness.  They provide beds, showers, toilets, and a hot dinner, but reservations can be hard to come by in the high season.  We had decided not to stay in the Refugios and just camp, but we quickly realized backpacking in Torres del Paine does not really feel like the wilderness camping we are used to, more like pitching a tent on a hotel lawn.

Our first night was at Paine Grande, which was windy…really really windy, so everyone sets up their tents near the hillside and really close together. 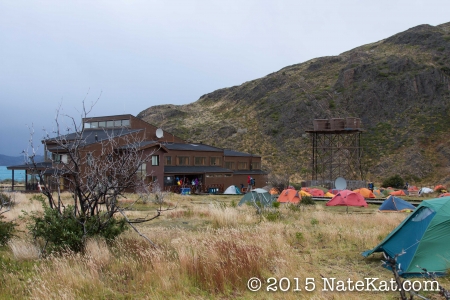 Once we finally got off the ferry, we quickly registered and set up our tent. We had been stuck on airplanes and buses for what seemed like forever and had no desire to hangout with the crowds of campers, so we quickly headed out on a day hike to Glacier Grey.  It is recommended to allow 7 hours round trip for this hike so we knew we wouldn’t be able to make it to the glacier with the ferry delay, but we thought we could get close enough to get a good view of it.  We quickly realized the “wind” symbol on the map is no joke. 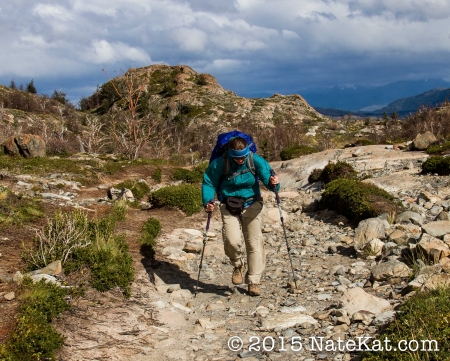 Despite the hundreds of people at the refugio, the trail was not crowded at all, so we finally felt like we were out in the wilderness and could enjoy the views. After an hour and a half we reached a great view point of Glacier Grey and Grey Lake.  We fought the incredible wind for a few minutes to take some photos, then realized a rainstorm was coming off the glacier and decided to head back. 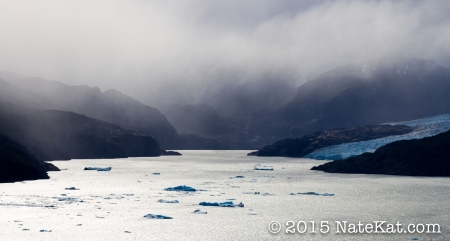 During our hike we came across some brilliantly colored flowers in a glen.  The combination of the purple and white varieties was striking. 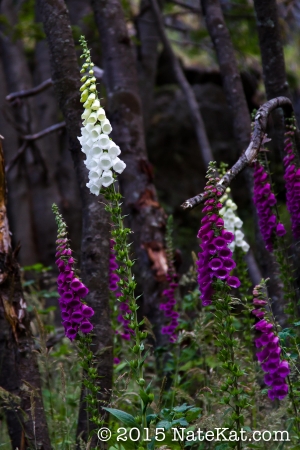 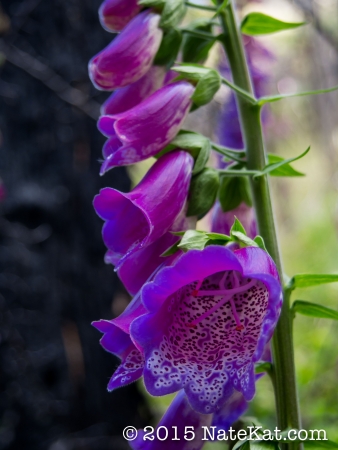 As we headed back on the trail, a vibrant rainbow appeared in front of us, appearing to end right at our campsite! 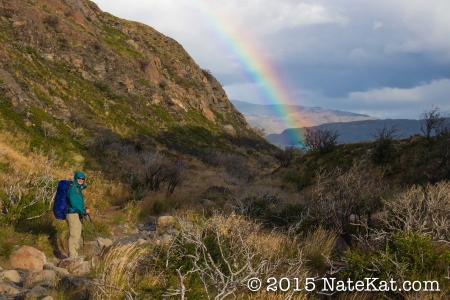 Although we encountered some rain and extreme wind it was nice to be on the trail and away from all the crowds. We made it back to camp with plenty of daylight to cook dinner and relax a bit before bed, but the wind and rain kept us hiding in our tent for most of it.

On our second day we planned to hike to Italiano, set-up camp, then day hike to Mirador Britanico (Viewpoint). We hiked 2 hours to Italiano mostly in the rain watching the wind whip up the water from the lake and pound the shore.

Map Displays Along the Trail (Not always to be trusted)

Italiano is just a campground and doesn’t have a refugio.  Luckily this campsite was amongst the trees, which helped shelter us from the wind and rain.  It was also really crowded (since it’s one of the few free campsites) so we quickly setup camp and left the crowds to hike to Mirador Britanico.

The trail wasn’t too muddy since it was mostly covered by short twisted forests that sheltered us from the rain and wind. 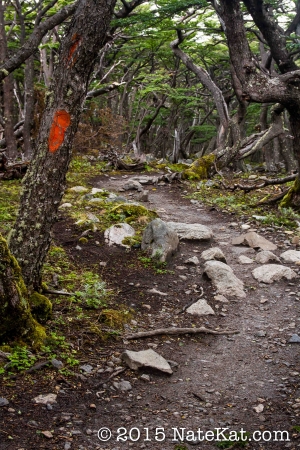 Some portions of the forest were wiped out by a rockslide creating a desolate scree wind tunnel.  You could watch other hikers make attempts to run across the rocks and become overcome by the wind and hide behind boulders.  When we sensed a lull in the gusts we made a run for it, passing the pinned down hikers, then diving into the trees as the roar of the next gust swept over the trees.  The trees were dense, so the scree gave us a first glimpse of the mountains that were surrounding us. 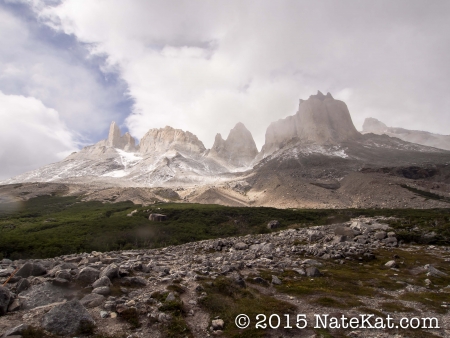 After 2.5 hours of hiking through rain, wind, and fog we reached the mirador. 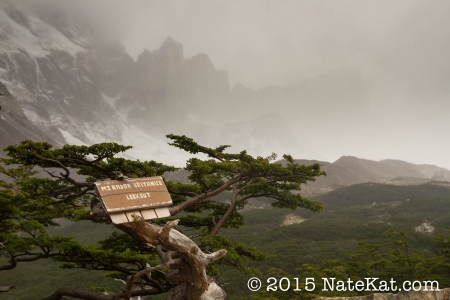 The mirador was exposed to hail and cold wind sweeping off the glaciers, so after 20 minutes waiting for the clouds to clear we decided to head back. 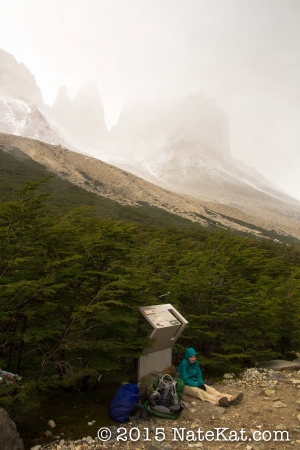 The hike from Italiano to Chileno is about 14 miles and was the longest camp to camp stretch we had. Chileno has a restaurant, refugio, and offers mule rides from/to the Hosteria Las Torres (Hotel accessible via car/bus).  Campamento Torres is 3 miles beyond Chileno and provides a good base camp to then day hike to the Torres (Towers).

We finally got some good weather and we could see numerous mountain ranges towering over us and off in the distance. 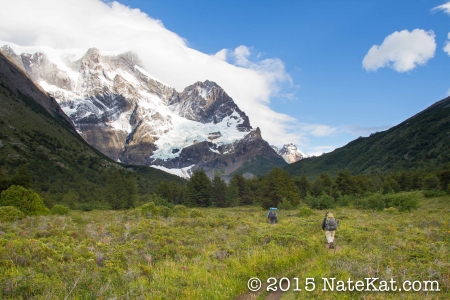 The first 10 miles of the day was relatively flat and took us along the Lago Nordenskjold. 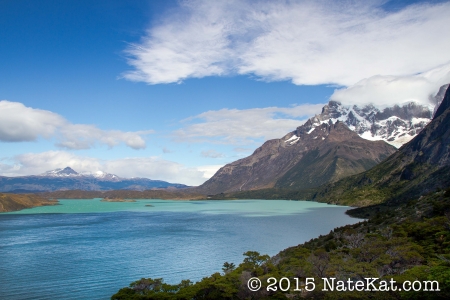 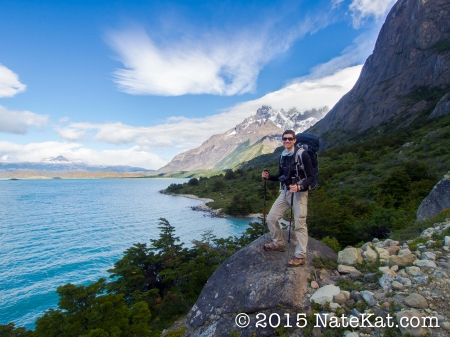 One thing we really appreciated in Patagonia is that the water is safe to drink without filtering, which is pretty much no longer true anywhere in the US.  We quickly took to using the small waterfalls and streams as our new drinking fountains. 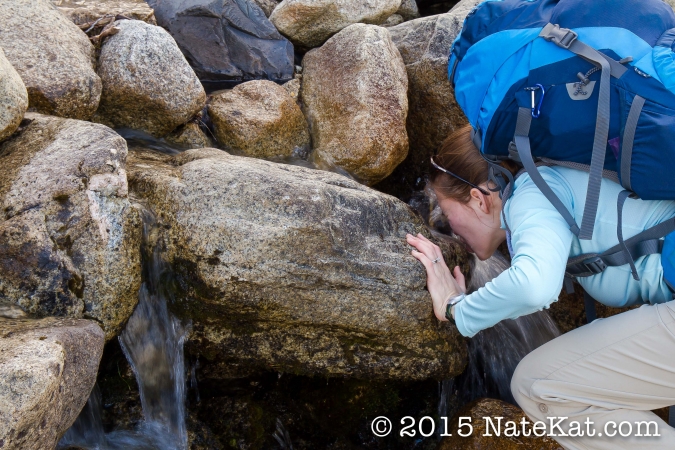 After a couple hours of hiking we stopped at Refugio y Campamento Los Cuernos and watched the condors circle the Cuerrno Este peak, which was about 6,000′ above us!  The Andean Condors can soar at altitudes of 18,000 feet! 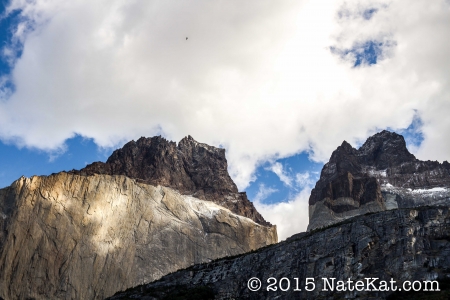 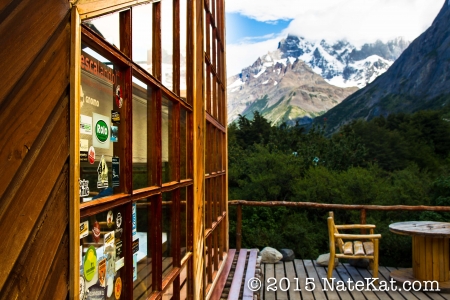 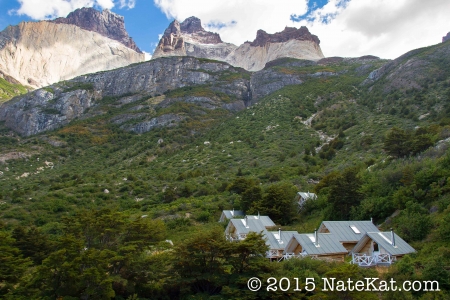 The southern tip of South America has a thinner ozone due to CFC usage.  Even though we were at the equivalent latitude as Calgary, Canada we could feel the intense sun during our hike around the lake that had little shade. 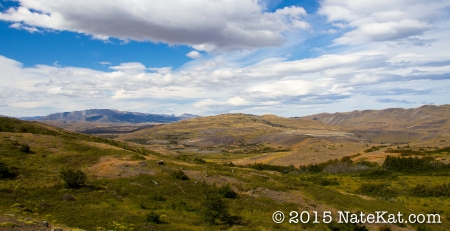 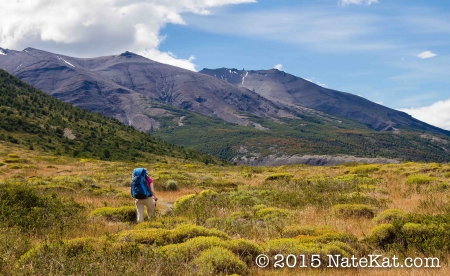 Nearing mid afternoon we made the turn towards Campamento Chileno, which climbs about 1,500 feet and then drops into the camp on the banks of the Rio Ascencio.

Nathan had injured his knee on the previous day hiking down from Britanico Mirador and it started to slow us down on the steep incline.  We opted to stay the night at Chileno instead of pushing on to Camp Torres.

The hike to the famous view point (mirador) is about 2.5 hours along a river and then a steep climb up a rocky scree.  Many people recommend getting to the view point for sunrise, but since we opted to spend the night at Chileno instead of Camp Torres, we would have had to start hiking by 3:30 am, which felt too early. We still started hiking pretty early, doing the first mile by head lamp.  We made it to the top around 8:00 and the sun was high in the sky, but the sky was clear.  Even though we didn’t make it for sunrise, we considered ourselves lucky to have clear skies to see the Torres (towers). 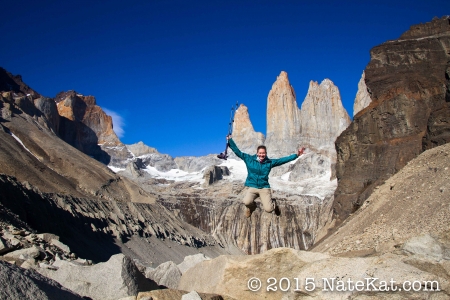 The lake in front of the towers was like a mirror.  There wasn’t any wind or breeze, which felt very strange since we had been fighting it for the last 3 days. 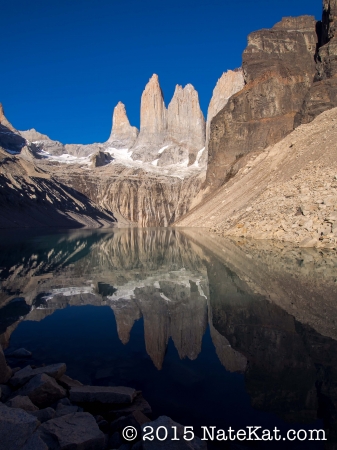 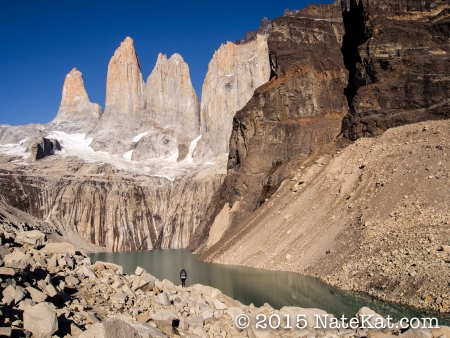 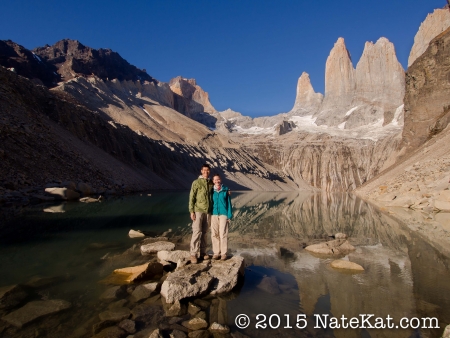 After taking a ton of photos, we knew we had to leave and start the long hike down to catch the bus at the Hosteria Las Torres.  We hiked down the rocky mountain and back to Chileno Refugio and picked up our backpacks we had stashed under our tent platform.  We grabbed some water and started the 2 hour hike down to the hotel, which is completely exposed to the sun. Luckily we were hiking down hill – the day hikers coming up the valley from the hotel looked miserable in the hot sun.

We waited for the bus with the other 50+ backpackers that we had been hiking along side and camping with for the last 4 days.  Because almost everyone you see is hiking in the same direction and doing the same W-circuit, it often feels like you are hiking with a group of 50 backpackers from 10 different countries. We would even see some of the same people later on in our trip in Argentina hiking around Fitz Roy.

Waiting for the busses

Torres del Paine was a fun start to the trip, completing our first international backpacking trip! 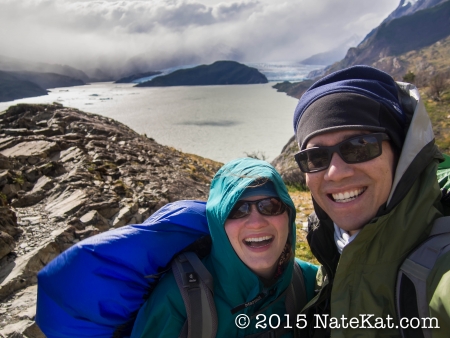 Check out some of the other photos from our Torres del Paine adventure.