You are currently browsing the monthly archive for April 2014.

After our visit to Nome we flew to Fairbanks for a few days to try out dog sledding and see the Northern Lights.  We tried out the Alaskan tradition of staying in a B&B at Dale & Jo View Suites just outside of Fairbanks.  We enjoyed the hospitality and breakfast in the morning.  We tried to stay up and look for the Aurora, but fighting the time change and our busy days, it was hard to stay up past midnight.  In any case, the first two nights were cloudy, and talking to other guests in the morning confirmed that we didn’t miss much.

While in Fairbanks we tried dog sledding since there was more snow on the ground than in Nome.  We went to Just Short of Magic for our incredible mushing experience. 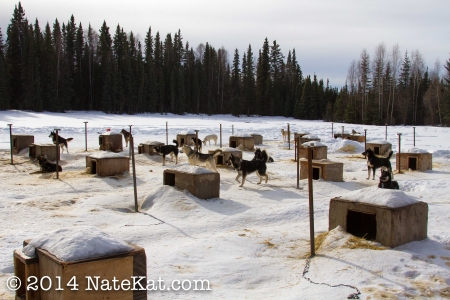 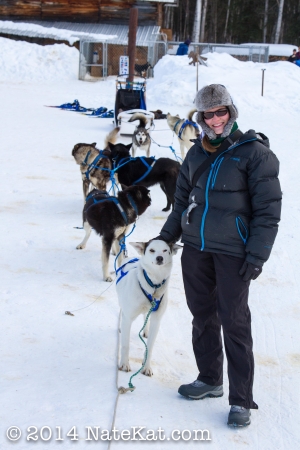 Katharine with Our Lead Dog, Patch

We decided to take the “mushing school”, which means they teach you about dog sledding and then you get a chance to stand behind the sled and drive the dogs.

Eleanor Wirts, owner and expert mushing guide, taught us all about the different types of sled dogs and equipment.  We learned how to harness and hookup the line of dogs.  We had 9 dogs in our team and we were surprised how friendly they were.  They were anxious to get on the trail, but they knew to stand still when you were putting the harness on, but once it was on, you better hold on tight or it would be off and running without you!  We were also taught about the different positions in the line. We had 1 lead dog, 2 swing dogs, 4 team dogs, and 2 wheel dogs to pull the sled, Eleanor, and both of us. 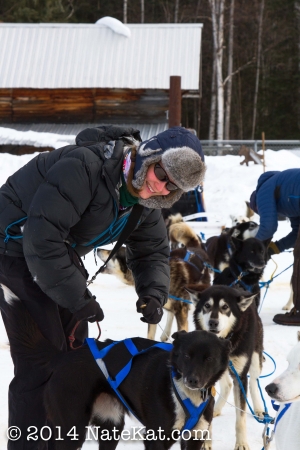 Hooking Up Starbuck, one of the Swing Dogs (2nd in line behind the Lead)

At first we both sat in the sled as the she told us about the commands (Gee- Right, Haw- Left, and Whoa- Stop!).  Little known fact, the dogs learn to poop on the run.  Not thrilling at eye level with 9 butts running 15 mph! 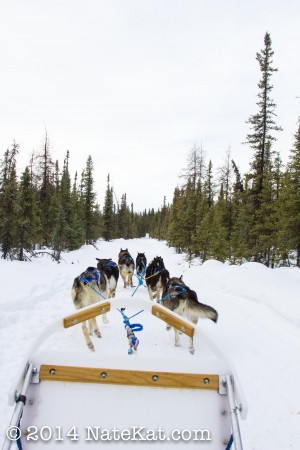 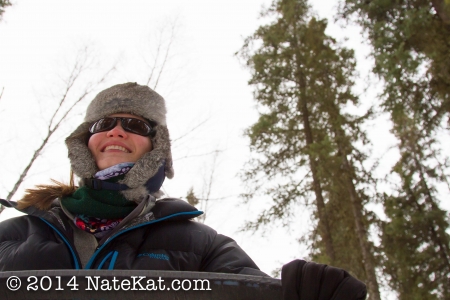 After another 10 minutes Nathan also got his instruction and solo turn on the runners.  It was a thrilling experience to have 9 dogs pull you over miles of snow with what seemed like little effort.  You could tell the dogs were enjoying themselves and could go for miles. 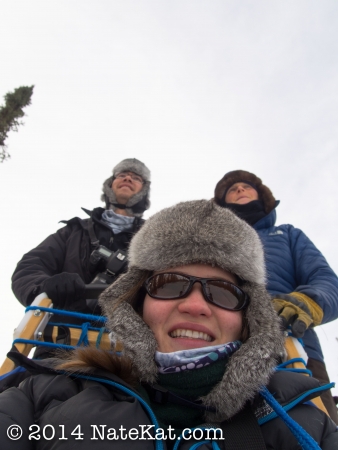 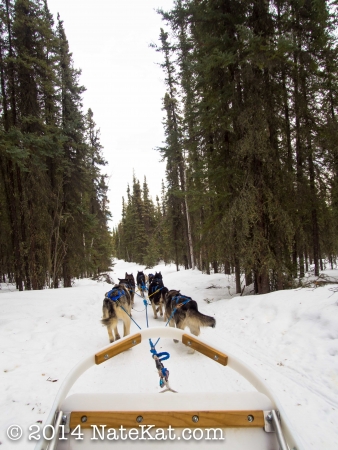 It was about 30 degrees which is pretty warm for the dogs so every time we stopped, they never missed the chance to jump in the snow drifts and burrow to cool off.  Before we knew it we were pulling up to the kennel and the thrill ride was over. 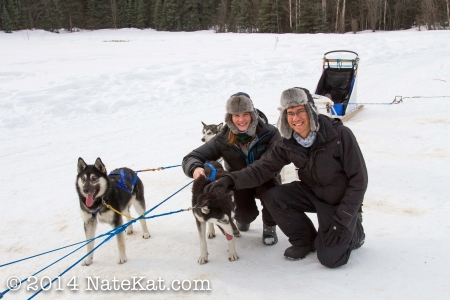 We spent another 30 minutes with the dogs as other guests took their tours.  The dogs were very excited, but once the sled left a calm silence came over the kennel until another sled could be seen coming out of the trees and chaos would erupt. 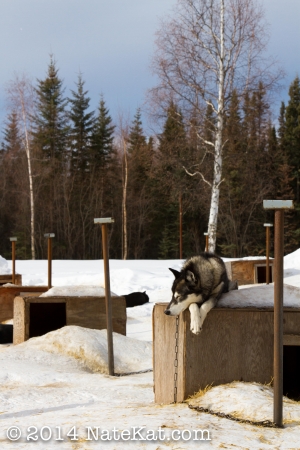 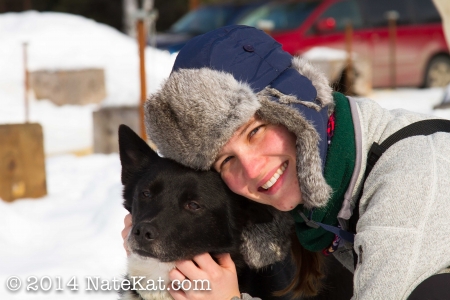 The dogs were so friendly we wanted to take one home.

While in Fairbanks we had dinner with Tim and Mary who are old friends of Peter’s.  They live in a cabin with limited utilities, which was an interesting lifestyle to learn about.  They had a lot of stories and experiences and it was intriguing to meeting someone who walks the talk even if it isn’t the easiest when living in one of the coldest cities in Alaska.  Their do-it-yourself attitude and accomplishments were inspiring and got us excited about our future house even though we know we’ll never sacrifice as many creature comforts.

After about two days hanging out it Fairbanks, we headed to Chena Hot Springs to get away from the city for one last chance to see the Northern Lights.  We decided to give it our best shot by taking a snow cat tour to the top of a nearby mountain/hill to wait for the phenomenon. 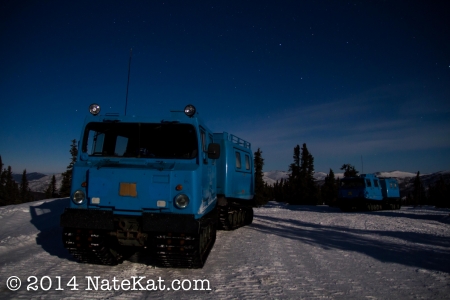 Riding in a snow cat is loud and uncomfortable, but it’s the only way to get there.  After spending an hour or so in a heated Yurt drinking cider and hot chocolate, we heard some excitement outside as the northern lights started to appear. 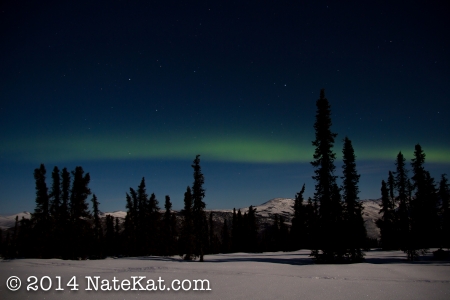 It was just a trace of a greenish cloud and could easily have been mistaken for a wisp of regular clouds.  The camera picked up the green much better than your eyes could.  The full moon didn’t help either. 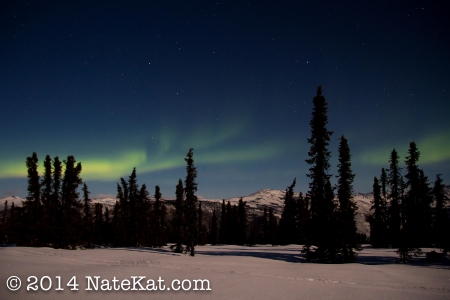 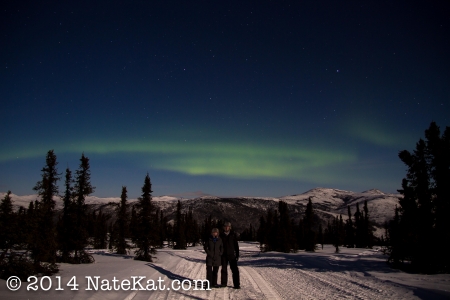 We were hoping for more colors, but we’ll take what we can get.  It was 10 degrees outside so when after 30 minutes the Aurora faded, we went back into the Yurt to stay warm. We were definitely glad that we did the late night tour because we probably would have missed seeing them otherwise. But we still would love to see them in the future in more glory. A good reason to return another year!

During the day back at the resort we took a short dip in the outdoor hot springs, which felt good in the freezing temperatures, except your wet head above water gets pretty cold.  The resort has gained popularity in Japan, so much so that there are direct flights from Tokyo to Fairbanks.

We had a couple hours before we left for the airport to explore the Ice Sculpture World Championship in Fairbanks. 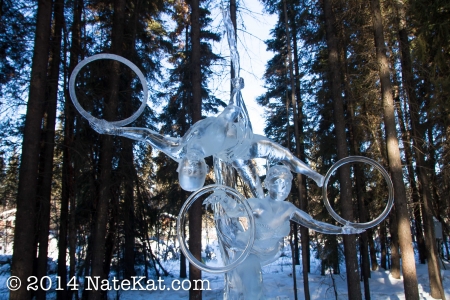 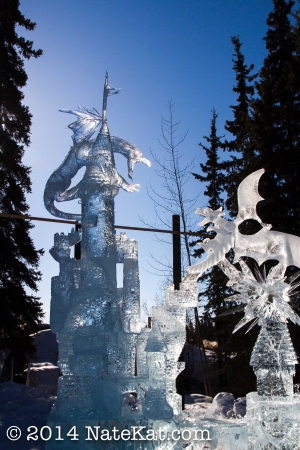 There was also a lot of scuptures for kids to playing on along with a couple ice slides! 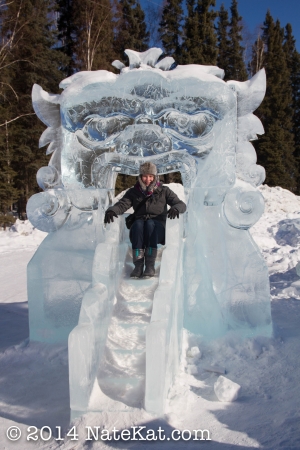 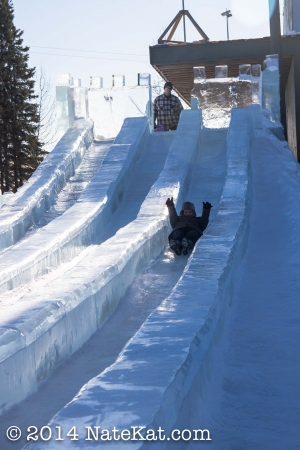 It was a fun way to end the trip. After spending 10 days in sub-freezing temperatures, 8 flights, 1,592 photos we were ready to unthaw and hopeful for warmer weather back home, but we were greeted with similar temperatures when we arrived in Philadelphia. Longest winter ever, we are so glad that Spring has finally arrived now!