We saved an amazing experience for the last backpack of our Epic Trip. Havasu Canyon, a part of the Havasupai Indian Reservation, is known for its remarkable blue-green water and beautiful waterfalls. We had seen pictures of it before our trip and couldn’t believe the water really is that color, but it really is that blue! It did not disappoint, it’s an amazing place that we highly recommend.

The trip does require permits for camping overnight which can be hard to get in the peak season (particularly long weekends like Memorial Day), and sometimes it can be difficult to reach the Havasupai Tribe’s tourist office on the phone, but back in May Katharine was able to get permits for October. We decided to reserve 2 nights so that we would have plenty of time to explore the canyon. After we finished the Grand Canyon Rim to Rim earlier than expected, we were even able to move our reservations up by a couple days, so apparently they weren’t totally sold out. In the end, that worked out great for us because we hiked out on Saturday, which allowed us to avoid the apparent weekend crowds.

Since the government shutdown was still in full-force, we were very glad that this amazing place was on tribal lands and still accessible. It is possible to hike to the Colorado River and enter Grand Canyon National Park, and while we considered doing it just to be in the park briefly during the shutdown, we decided it wasn’t worth the extra 8 miles of hiking. Instead we enjoyed a very leisurely 3 day backpack. 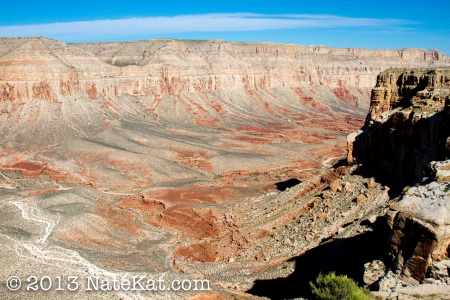 A view from Hualapai Hilltop, the start of the trail to Supai

This adventure starts by driving down the remote Indian Road 18 to a parking lot with a helipad in the middle of the desert on Hualapai Hilltop.  The only way to the Supai village is hiking or riding a mule 8 miles through a canyon or via helicopter. All supplies and everything needed in the village are transported one of those ways.

The trail descends about 2,000 feet to the canyon floor, most of which is in the first couple miles.  The canyon walls were the traditional red sandstone, but after backpacking Zion and Grand Canyon we weren’t as impressed.  We only took a few photos of the hike to the village, which definitely improved our hiking time. 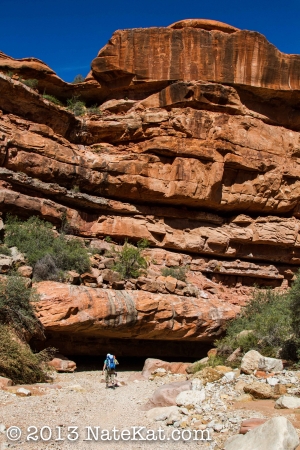 There were a few differences we noticed from hiking in the Grand Canyon and other National Parks.  For example, the mule trains supplying the village were much larger and the mules were loose, relying on herding techniques. Of course the canyon walls do much of the herding, but there are several areas where the canyon is rather wide and there are multiple different paths to follow, so sometimes the gear-laden mules would split up and the herder on horseback would go one way and rely on his dog to go the other. This was fun to watch, but did force us to take cover behind rocks or climb up a small ledge to get out of the way. This is not a trail to put on headphones while you hike… you need to be alert! 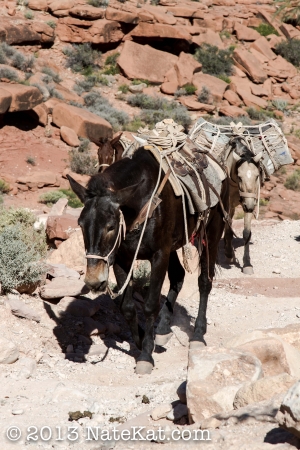 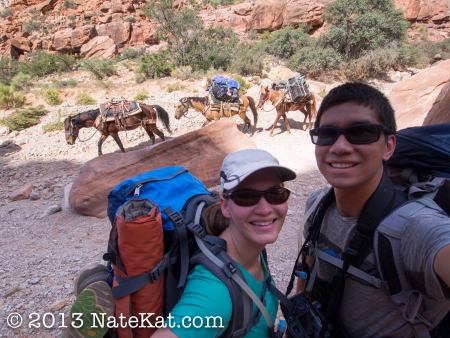 After 8 miles (which felt longer since there was a lot of sand to hike through), we reached the village of Supai, where we checked in at the tourist office to get our wristbands and permit tag for our tent. The village was tough to walk through because although it is located in an internationally-renowned hiking destination, it is also a grim reminder of the poverty and remoteness of the village.  We didn’t take any photos in the village because many of the conditions were so poor, and we felt it would be disrespectful. Mostly there was a lot of trash, but we also saw malnourished horses and many wild (but mostly friendly) dogs roaming the dirt roads hoping for food hand outs. On the other hand, the school building was very well maintained and the grocery store had a lot of postings for community events. We couldn’t imagine living in such a remote community.

The last 2 miles from the village to the campground seemed like they took forever, but we were encouraged by the blue water of Havasu creek and finally knew we were close when we came to Havasu Falls. The turquoise water pouring over the cliff into a beautiful deep pool was as amazing as all the pictures show it. We decided to leave exploring the falls for the next day since the sun was setting behind them, so we continued on to the campground.

At the campground, there were some obvious differences between the National Park and the tribal lands. Here there were no assigned campsites, and a recent flash flood had completely reshaped the area and left many picnic tables stranded in the river. We were amazed how many picnic tables they had made or transported down there, and the campground was clearly meant to hold hundreds of people, which was definitely more than the NPS would have allowed, but certainly makes getting permits easier. Limiting access to protect a place like this is such a tough trade-off, especially when tourism is the main source of income for the tribe. Unfortunately there was quite a bit of trash left by all the campers, which is always such a shame to see. On the other hand, the tribe had an impressive number of solar toilets that were quite good shape and we noticed they were serviced every day. They also did check permits on every tent to make sure that everyone had checked in. As rule-followers ourselves, we like to see permits enforced because there are plenty of people who ignore the system on the chance they won’t get caught. We’ve only had our permit checked in a National Park/Forest once in all our years of backpacking (it was in the Grand Canyon actually). 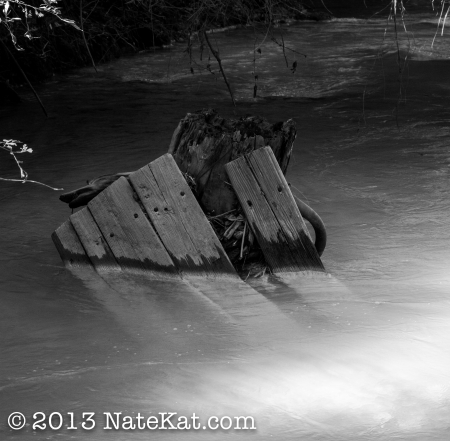 Picnic bench washed away during a flash flood 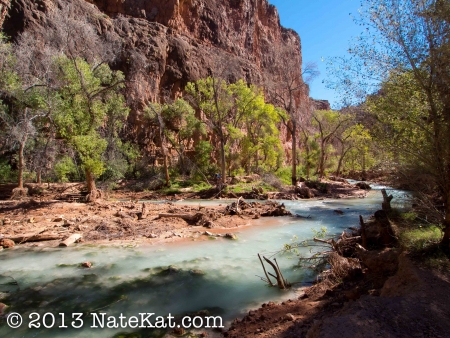 Lasting effects of the flash flood

The campground was also different because there were lots of dogs roaming from campsite to campsite begging for food. We didn’t feed the dogs, but others did which would cause more dogs to gather at their campsite and sometimes break out in small skirmishes over food. Luckily though they didn’t seem too aggressive, and there were plenty of people, so if you didn’t give them attention they left pretty quickly. 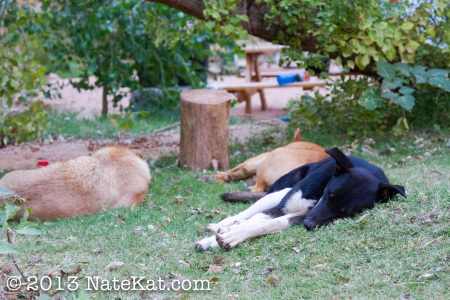 We had the entire next day we to explore Havasu Falls and dayhike to Mooney and Beaver Falls (8 mile round trip).  The water in Havasu Creek percolates through layers of limestone picking up high concentrations of magnesium and calcium carbonate, which gives the water an unusual blue color and builds striking travertine dams.  The 100 ft Havasu Falls is quite a sight, and we were glad to return to explore it a little more, but the 190 ft high Mooney Falls was even more impressive. The surrounding walls are minerals built up over many years and the water changing its flow around the walls.  The falls were named after a miner who fell to his death on the falls in 1882.  They were never able to retrieve his body, and it is now encased in the walls. 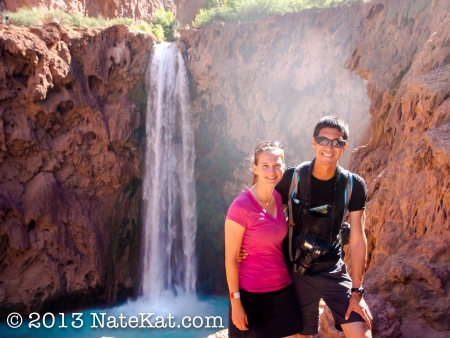 Reaching the bottom of Mooney Falls is actually quite a challenge, especially for those with a fear of heights. It requires climbing down the walls through a series of tunnels, chains, and wooden ladders, all of which were cold and slippery due to spray from the waterfall.  Once again we were reminded that this is not a National Park, and the maintenance and safety of the trails are not guaranteed. All hiking beyond the campground is at your own risk. 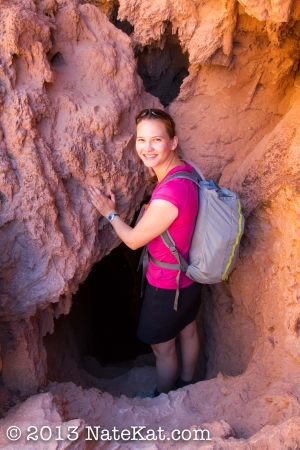 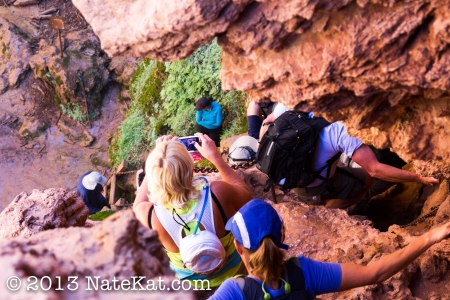 The narrow tunnels and ladders can get crowded and we watched as many people became stranded in the cold spray from the falls.  Keep in mind, most people are headed down in the morning and up in the afternoon.  Trying to go up in the morning will be nearly impossible. 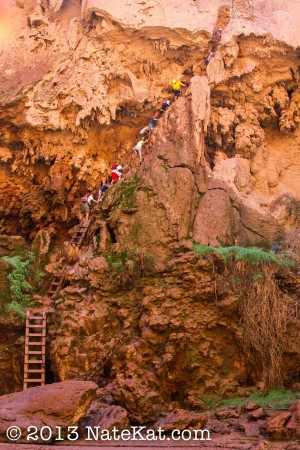 But once you get to the bottom, you realize the climb was well worth the wait and effort.

We ate a quick lunch and switched to our water shoes to hike to Beaver Falls. 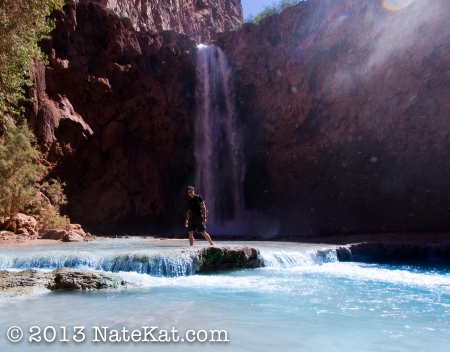 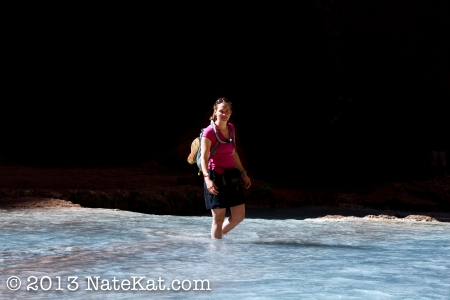 The creek flow and depth varies and some areas are easily traversed while others are quite deep.  Our Zion backpacking trained us quite well to identify deep pools and find unique routes around them. 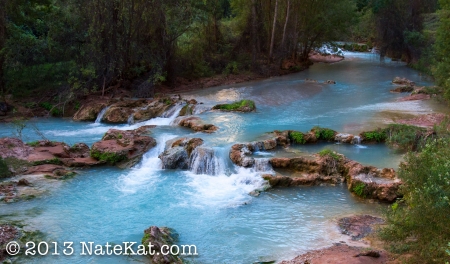 The trail is unique since it crosses the small water fall travertines, fields of vine-like bushes, makeshift bridges, and ladders. 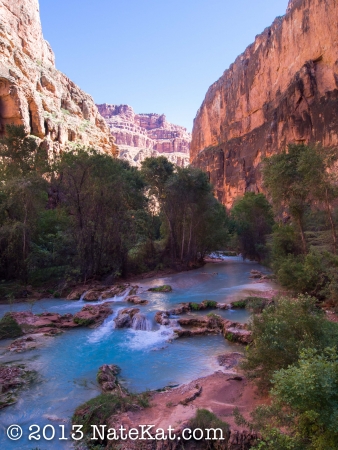 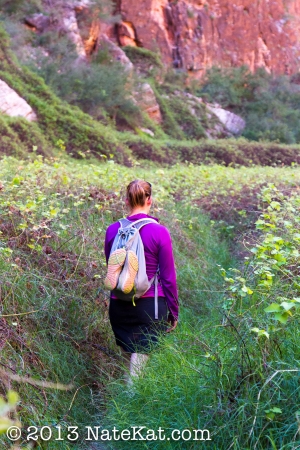 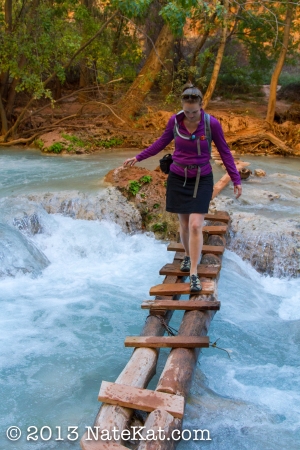 After hours of photography and hiking we reached Beaver Falls in the afternoon. 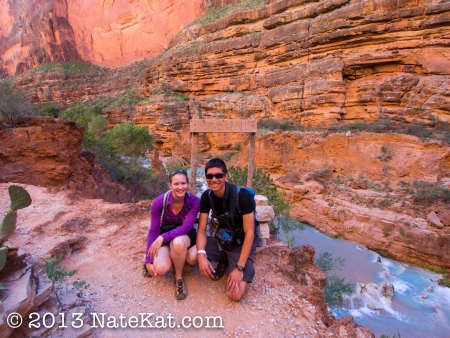 It’s almost impossible to get lost because you are just following a canyon, but you can get on the wrong side of a deep pool or waterfall making it more difficult to continue on to Beaver Falls.  One of the only directions we heard was to look for a single palm tree.  You want to make sure you hike on the side with the tree and at that point you’re getting close to the falls. 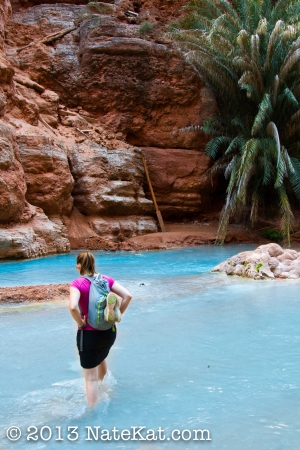 We saw a lot of people turn around before reaching the falls, and by the time we reached the falls many people had left and we had them all to ourselves! Unlike Havasu and Mooney Falls, Beaver Falls is more of a series of smaller falls, which makes it easier to explore and get up close. 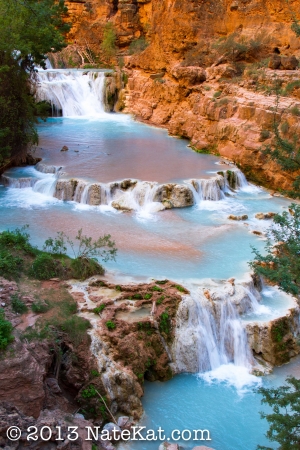 The view from above Beaver Falls

Many people also just enjoy the view from above Beaver Falls, but we hiked down to the bottom then back up the travertines. 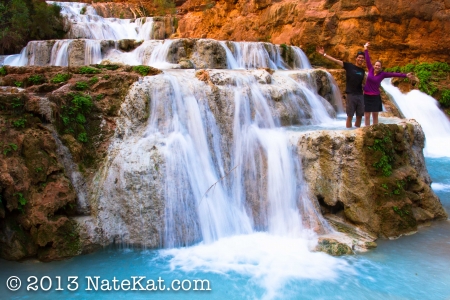 Yes, we hiked with our tripod and remote! 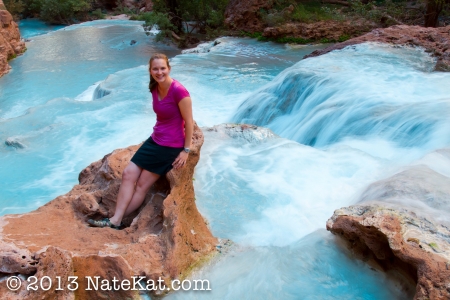 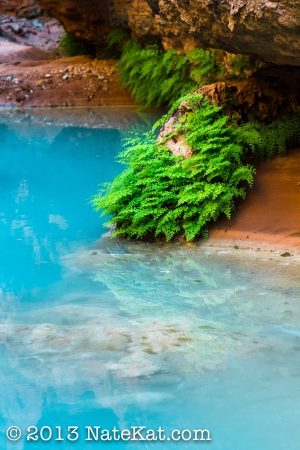 As the sunset behind the canyon walls we made the lonely hike back to the campground. 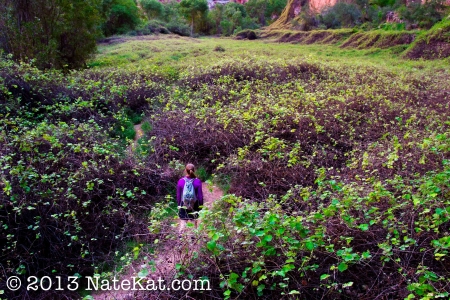 Keeping with our desert hiking tradition, we also saw a snake.  It wasn’t a rattlesnake this time, but still startling.

After our long 8 mile day hike, we made it back to the campground and enjoyed some local fry bread!  The local vendors are just outside the campground and are very friendly.  To our surprise, the young locals we talked to had never been past Mooney Falls!  We were shocked that you could listen to thousands of people from around the world rave about the creek and falls and never go explore them in your backyard.  We were also surprised to find the two fry bread vendors were quite competitive and did not work together to fix prices… the stand we went to was relatively new and had driven prices down. The fresh fry bread was less than $5 and tasted amazing after a full day of hiking!

We left early on a Saturday morning passing almost a hundred college-age kids backpacking down the canyon.  It definitely seemed like the campground would feel very crowded that night, so we were glad to be on our way out. The hike out wasn’t too bad, but it definitely got hot once the shade disappeared.

When we got back to our car, we found a tribe member sleeping in the shadow of our car, apparently waiting for someone/something!  Nathan gently woke him up and pointed him toward the next shady spot, which he crawled to and went back to sleep.  Just another reminder this was a different world! 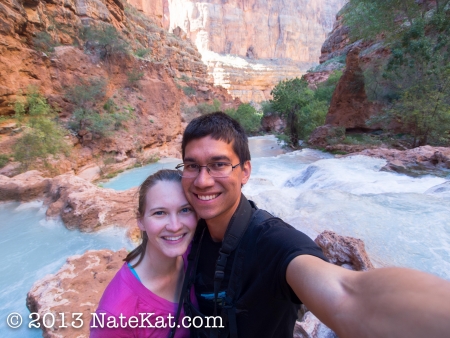 We highly recommend visiting Havasupai… and since the mules can carry you and/or your stuff, it’s quite accessible for anyone. They even have a lodge in the village if you aren’t up for camping.

Although we were sad that this was our last time camping as part of our Epic Trip, taking us to a total of 33 nights in a tent, this was definitely a great place to finish it off! And we were still excited for the final leg of our trip, taking 6 days to make the remainder of the drive from AZ to PA.

Check out some more photos of this amazing place!