We are starting to build a pretty extensive hiking/ backpacking resume since we started about 3 years ago, and one thing we were very excited to add was hiking across the Grand Canyon. There are a lot of different itineraries/schedules that people follow (including many who hike it in a day), but since we aren’t speedy hikers and we like camping in the backcountry, we decided to do it as a leisurely 3 day / 2 night backpack.

We entered the permit lottery a few months before the trip, but were not lucky enough to get a permit, so we left plenty of extra days in our itinerary to make sure we’d be able to get a walk-up permit.  For some reason, after going back and forth with the rangers on the south rim they gave us a permit on the first day we arrived!  Although we were excited and relieved to get a permit, especially with the impending government shutdown, we were surprised and weren’t really prepared to start the next morning. Our feet were still tired from hiking the Zion Narrows the day before and our gear was in disarray. So we spent the night preparing everything in freezing temperatures at night by head lamp.  While packing we met a new friend, Karen, who was also doing rim to rim in a couple days.  We stood around her campfire warming our hands and sharing adventure stories.

The next morning we parked our car near the Bright Angel Lodge, walked through a small group of elk in rut (and past a park employee who was pretty scared of the elk), then boarded our shuttle/ van for a 4 hour drive to the North Rim.  There were 9 others in the van and we listened to the driver ramble on and on about random stories as if silence was forbidden.  Most of the other people in the van had just finished the Rim to Rim and were taking the shuttle back to their cars. We could definitely tell who took 5 days and who did it in 1!  The couple who day hiked across were young and fit, but they were slow to walk as their muscles and feet were extremely sore.  This confirmed our choice to take 3 days and 2 nights to traverse down the North Kaibab Trail (8,241 feet, 14 miles) then up the Bright Angel Trail (6,850 feet, 9.9 miles) totaling 23.9 miles!

We reached the trail head just after 12:00.  As we tightened our boots and checked our gear we were surprised by three young guys staggering up the trail, stopping their stop watches, then collapsing around the drinking fountain.  They had just ran across the Grand Canyon in just over 4 hours!!  This is one of those times when you think you’re crazy, but are inevitably upstaged by someone else.  Just as we were about to head into the canyon, the three runners abruptly got up and took off down the canyon… that’s right, they were running rim-to-rim-to-rim in one day! (total ~50 miles)  We laughed as we slowly trekked down the switchbacks as we could see them hundreds of feet below us already weaving around other hikers. 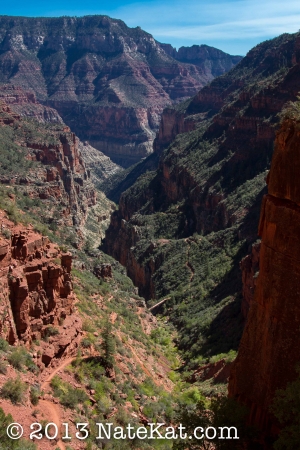 Our goal for the first day was to reach Cottonwood Campground 6.8 miles down trail descending 4,000+ feet.  As the sun began to set behind the canyon walls the massive walls glowed red and orange 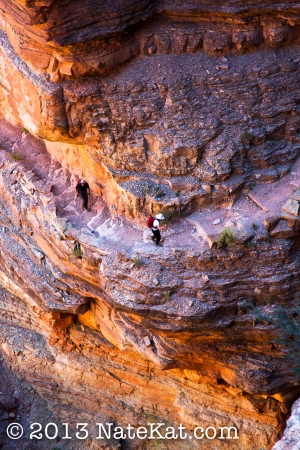 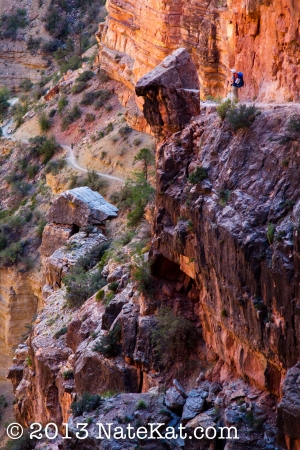 Since it was the weekend and the temperatures were mild, we actually came across a lot of people day hiking rim to rim south to north.  We came across many exhausted hikers eager to know how much further.  Some people were a part of large groups all wearing the same t-shirt others had a different type of uniform… 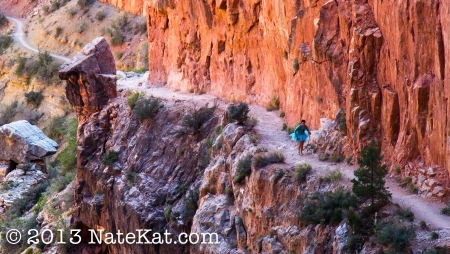 As you can see this girl had a tutu on because her group had all picked Disney characters.  Minnie Mouse had just passed us and we later saw a few characters from Peter Pan, Brave, and Alice and Wonderland.  I’m not sure what drives people to hike almost 24 miles across the largest canyon, but to do it in costume just boggles our minds.  It did bring a smile to our face every time we saw a costume hiker and it did seem like they were enjoying themselves, so to each their own.

We reached Cottonwood after 3 hours of hiking down a well maintained downhill trail.  The campground was small, simple, and most people went to sleep pretty early.  The next morning we got a later start, but knew we had time to spare hiking to Bright Angel Campground just 7.2 miles and dropping another 1,600 feet. 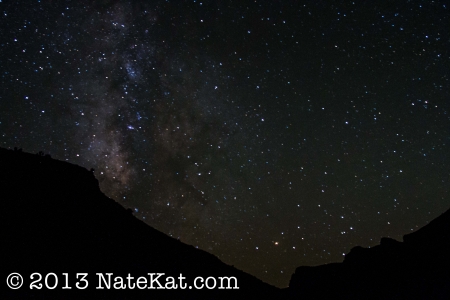 It was near freezing at the top at night, but down in the canyon it was much warmer, probably close to 70 or 75 degrees during the day.  We were happy to have time to make a side trip to Ribbon Falls, which is a strange but beautiful waterfall. 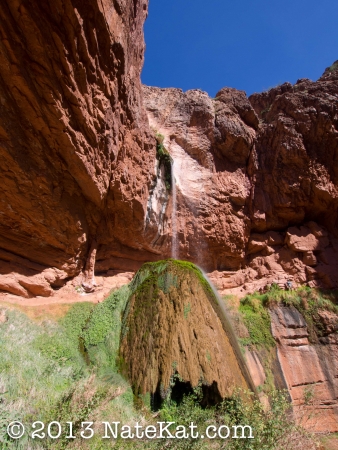 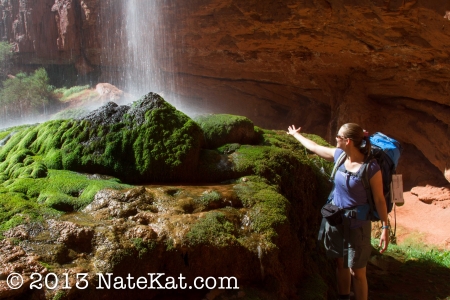 To be honest, when hiking in the canyon, the views weren’t as incredible as we expected.  The stereotypical Grand Canyon views are from the rim or Plateau Point.  As you can imagine, you can only see the two massive rock walls on either side of you, but it doesn’t have the narrow slot canyon feel of the Zion Narrows.  On the other hand, that could have just been our jaded feeling as we approached the end of our trip. Either way, we didn’t take too many photos on the second day. 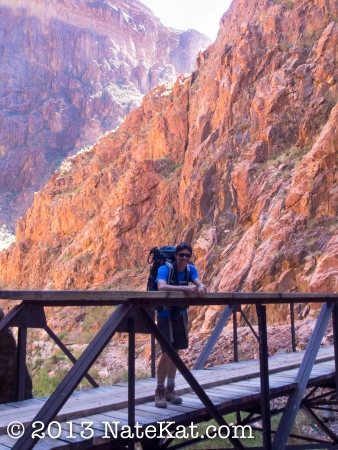 After 5 hours of hiking we reached Phantom Ranch around 2 pm, and the temperatures had risen significantly.  Many people ride mules from the south rim to Phantom Ranch, where there is a restaurant and small cabins.  For non-hikers, it definitely sounds like a great way to experience the Grand Canyon, but you have to plan ahead since they take reservations up to 13 months in advance and they sell out immediately. 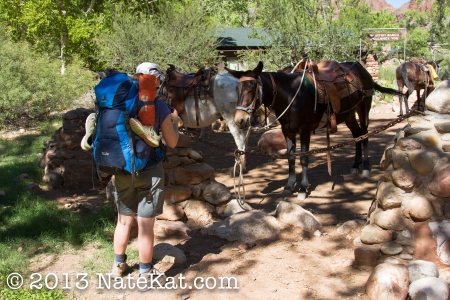 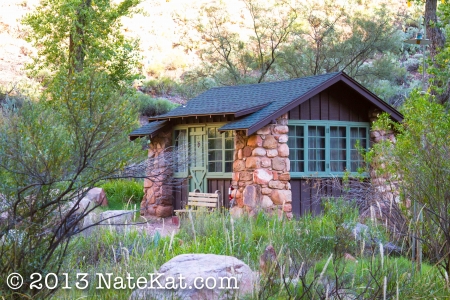 We setup our camp in the crowded Bright Angel Campground. It is a far cry from the secluded backcountry wilderness that we typically seek out when backpacking. They even had flushing toilets! But it was well-run and clean, and we were happy to have a nice place to set up our tent. 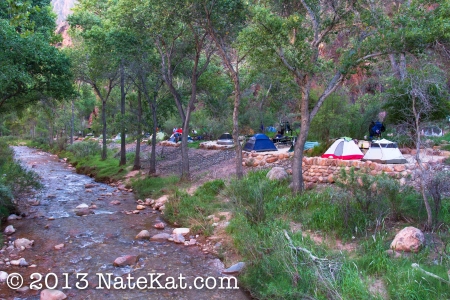 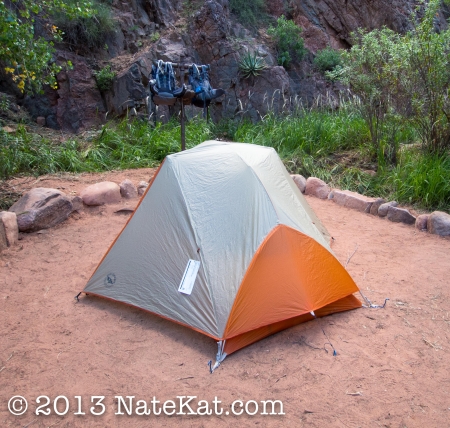 Then we spent the afternoon exploring the black bridge and the banks of the Colorado River. 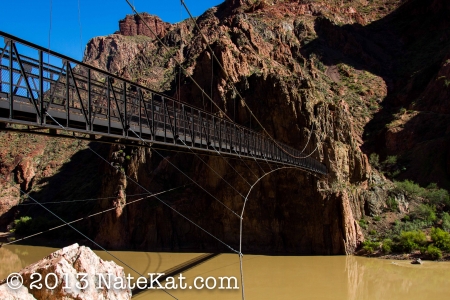 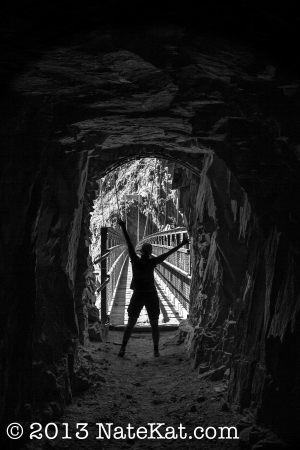 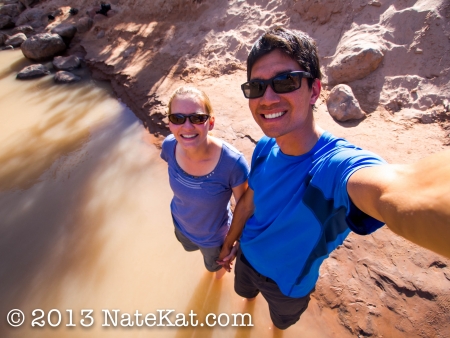 While making dinner at our campsite we noticed a critter trying to get under our tent!

Not really the type of visitor we wanted crawling around our camp.  After we gently encouraged the tarantula to leave our campsite, kids hovered around as it creepily walked across the sand. 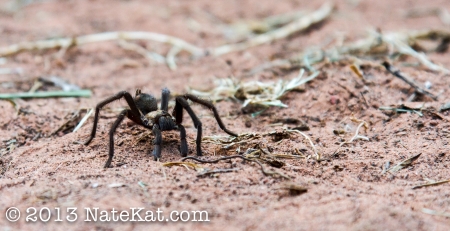 Just after sunset we went to hear a ranger give a talk on the stars above the canyon. He was very knowledgeable and entertaining as he told us about the stars and the park.  During his talk he mentioned that people could stay after for a scorpion hunt.  I think most people thought he was joking (Katharine included), but we had to find out.  We headed to the empty mule corral where the ranger scanned the rock pillars with a black light.  Within minutes we were staring at a glowing scorpion.  These scorpions glow bright green under UV light which helps them stay out of the sun during the day.  We found 8 scorpions that night and were shocked at the ability to find them, but were now a bit scared to crawl in our sleeping bags.  We also shook out our boots really well in the morning!

We had been mentally and physically preparing for the last day for a while, expecting the 9.5 miles and 4,380 feet of gain from Bright Angel Campground to the south rim to be really challenging, especially considering the likely heat. Despite all our experience hiking in SoCal, we do not do well in the heat.  So based on recommendations and research, we packed up our gear very early in the morning and hit the trail to beat the rising sun and heat.  By 6:20 am we were crossing the Colorado River on the silver bridge. 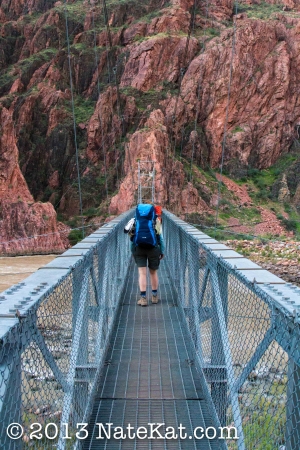 Even with our full packs we found ourselves racing up the canyon.  The trail was well maintained and had lots of switchbacks, making it an easy grade (designed for mules).  We were also surprised by the number of bathrooms and water refill stations along the trail, they were nicely spaced out and made for great mini-goals and rest spots.  We were worried about dealing with a lot of mule trains headed down, but we only saw a few and they were quite small and very calm. 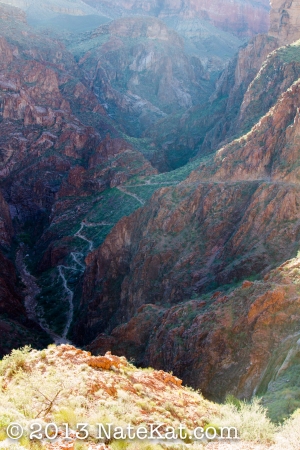 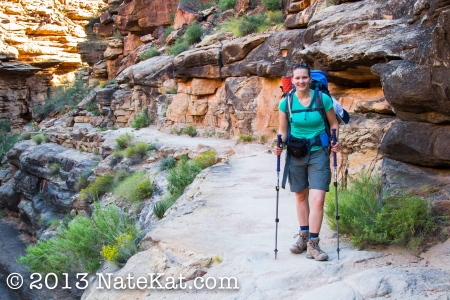 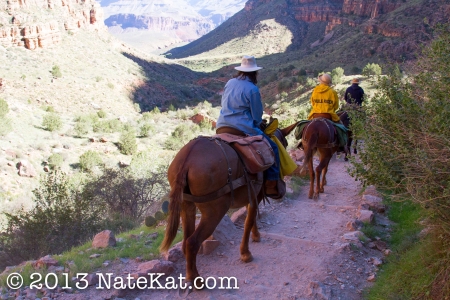 As we climbed up closer to the South Rim, the views kept getting more and more amazing. It felt incredible to look back and see the bottom, knowing that we were just there earlier that morning. 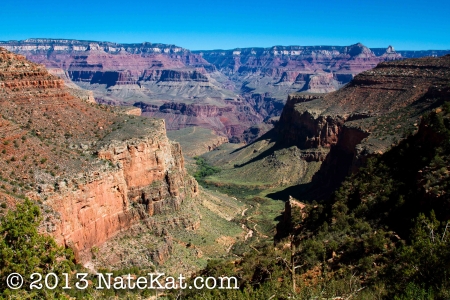 We reached the rim around 12:15 feeling great, very proud, and a little surprised that we had just climbed 9.5 miles out of the Grand Canyon in under 6 hours with fully loaded backpacks!  Keeping with tradition, we treated ourselves to a nice dinner and watched the sunset over the canyon, then treated ourselves to a night in .  It was quite accomplishment and will be something we think back on for many years to come. 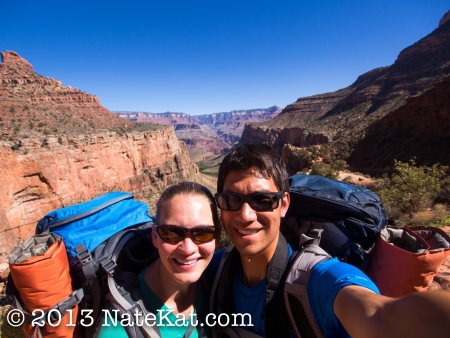 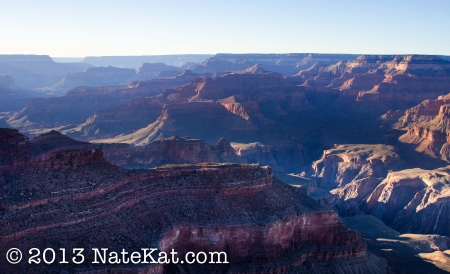 Check out the rest of the photos!