We are currently preparing to start the Teton Crest trail (4 day backpacking trip) tomorrow! Here’s a look back at the last NP we visited in Washington.

North Cascades National Park is the most remote national park in Washington near the Canadian border and we definitely noticed that it was less crowded. We enjoyed the beautiful drive out to the park, even stopping at a roadside farm stand for fresh berries and ice cream. Once we got to the park, the weather was pretty overcast but luckily not raining too much. We stopped at the visitor center, which was perhaps the best we’ve seen so far. The exhibits were great and the rangers were particularly helpful.

After the visitor center, we drove the scenic drive through the park on Rt 20. The mountains were definitely impressive despite the cloud cover, and the glacial lakes were a beautiful teal blue-green. 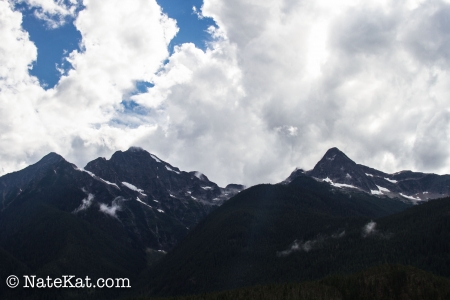 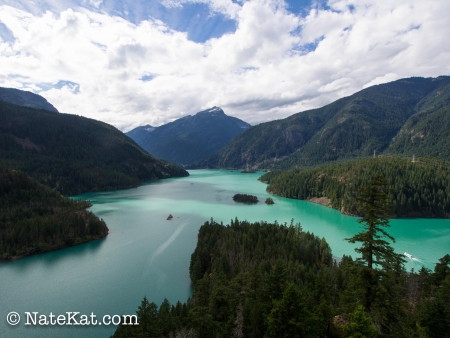 By the time we made it all the way to the Washington Pass at the far eastern end of the park, it was late afternoon. But we decided we still had time for a 4.2 mile hike to Blue Lake, which the rangers said often has mountain goats in the area. For the majority of the hike we were sheltered from the rain sprinkles by the lush forest, which also created great habitat for some unique mushrooms. 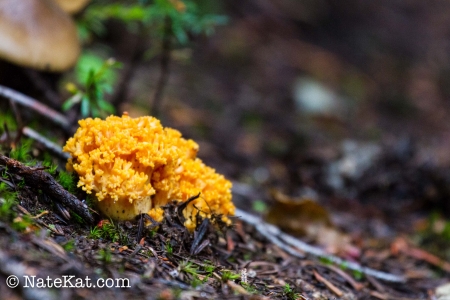 As the clouds parted, we reached the lake, which was really beautiful. Katharine took photos of the scenery while Nathan tried to capture the small fish rising (rather unsuccessfully unfortunately). 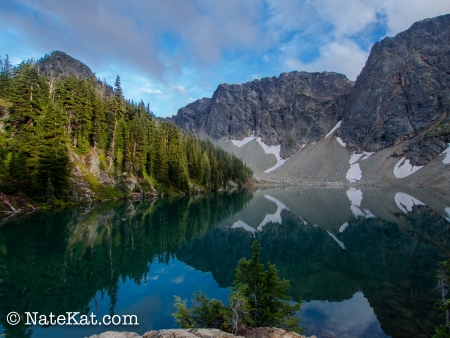 By the time we finished the hike, it was almost dark so we drove directly to our campsite on the western side of the park. We arrived after dark (as usual) and set up camp and ate a quick dinner before the rain really started. We had selected the campground (Fishcreek) because it is close to the trailhead for the hike to Sahale Arm glacier, which we intended to do as a long day hike the next day. However, around 2 am it started raining very steadily and when we awoke early in the morning, it was still pouring. We decided to go back to sleep and try to wait it out, but by 7 or 8 it was still raining. We packed up camp and drove to the trailhead to see if the weather was any better there, but no luck. We watched a few couples and groups start the hike (with varying degrees of preparedness and rain gear) but the clouds were dense and the hike would have been a long one (12 miles) so we decided instead to head back to Seattle and use the day to take care of laundry, errands, and other chores.  We later found out the immense amount of rain had cause a mudslide shutting down route 20, which we had driven the day before.  This summer the highway has been closed a few times to clear mudslides.

We definitely want to return to this park sometime in the future. Something about the mountains and lakes really intrigued us, and despite the gray weather, this might have been our favorite park in Washington. 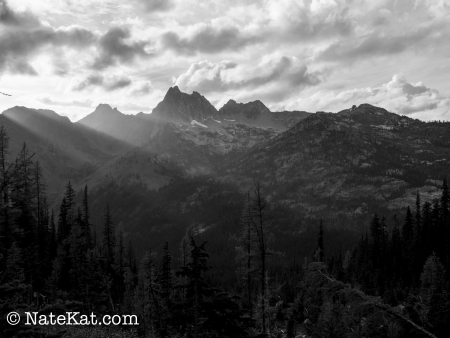 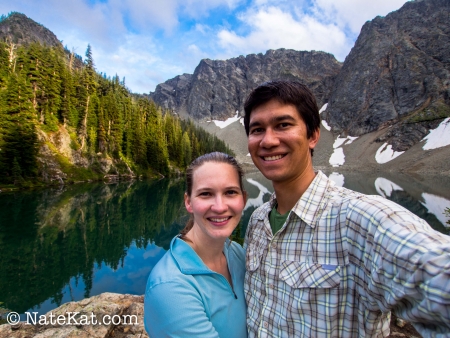