We are currently enjoying the lush forests in Redwood National and State Parks in the far northern area of California. But here is a look back at our last days in Yosemite.

The major highlight of our time in Yosemite was the three day backpacking trip we did from Cathedral Lakes to the valley floor via Clouds Rest and Half Dome. It was definitely a tough three days of hiking about 30 miles, and if we had been in better hiking shape, we probably would have enjoyed the last few miles a bit more, but it was absolutely worth it.

Our first day was a long 10 mile hike from Cathedral Lakes trailhead to Sunrise Lakes. We had a decent amount of elevation gain (2400′), but it was split up into various ups and downs, so it didn’t feel quite so bad.  We took our first break at Cathedral Lakes, which was a nice alpine lake, but the wind made it really cold, so we didn’t stay too long. 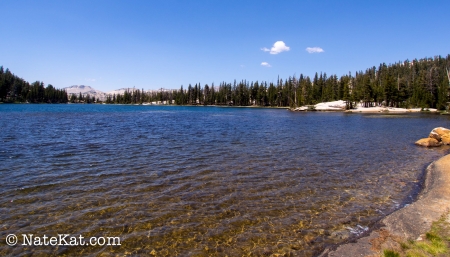 The trail passed through several beautiful meadows, and it was interesting to see how well-worn the trail was. We were traveling on an early section of the John Muir Trail, so it must see a lot of hiker traffic, but we were actually surprised how few people we saw all day. We realized the crowds of Yosemite don’t seem to venture much into the backcountry. 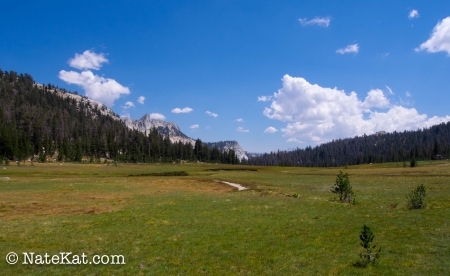 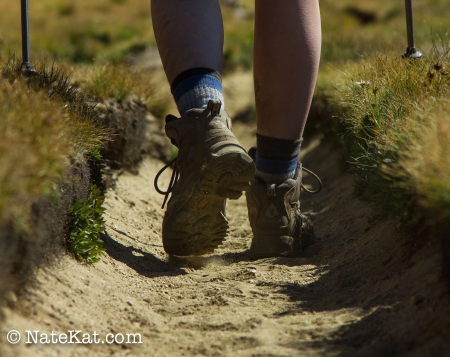 Finally, just before sunset we made it to our camp for the night at Sunrise Lakes. There were a couple other groups camping there and doing a little fishing, but we were so tired we just ate a quick dinner and pretty much collapsed. 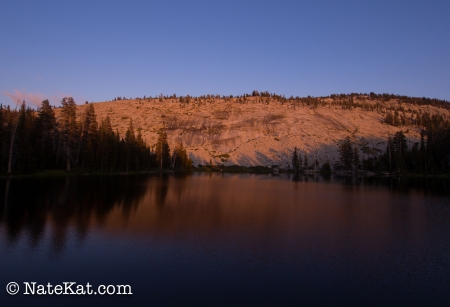 The next morning we got a pretty early start and started the climb to Clouds Rest, one of the best viewpoints in Yosemite at 9,926 feet. The trail to the top wasn’t as hard as we expected because it was nicely switchbacked and not too steep, so we had some extra time to soak in the views and watch the chipmunks beg for food. We were also able to see Half Dome from the side where the cables go up, which made us only slightly more nervous for our climb the next day. 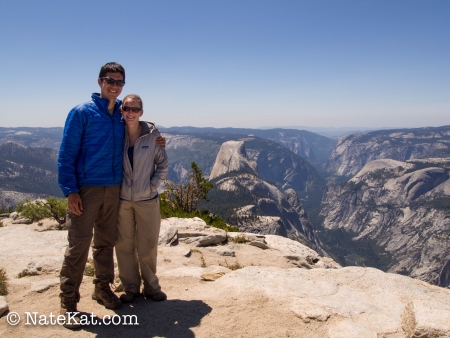 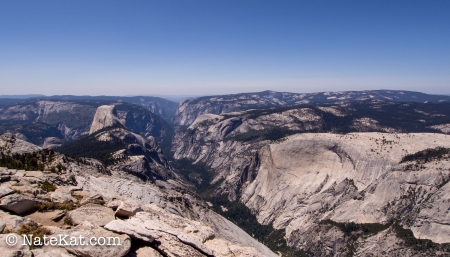 On our way down from Clouds Rest, we were feeling good and cruising at a pretty fast pace. Suddenly Nathan stopped short in his tracks, practically falling to the ground. Luckily he kept his balance (thanks to his trekking poles) and backed up quickly, because he had stepped just inches next to a Rattlesnake. The snake was not pleased with being disturbed, and it continued to rattle as Nathan recovered from the adrenalin rush and then quickly started taking photos.

Luckily we were able to pass it by safely and continue on our way down to meet back up with the John Muir Trail. That night we camped right near the trail along Sunrise Creek.

We selected our campsite based on its proximity to Half Dome (only 2.5 miles away) because we wanted to climb it first thing in the morning the next day before the crowds got to the cables. Most people hike Half Dome as a day-hike, starting at the Valley floor and hiking straight uphill for 7-9 miles (depending on the route). The very last part of the climb to the top of Half Dome, is the infamous cables section. The cables help you ascend the very steep part of the back of the dome and are quite dangerous, especially as they get crowded. About 400 people climb it every day, so at the peak of the day the cables are apparently quite congested with people trying to go up and down on the same cables. When we were at Clouds Rest, we had chatted with a couple who had climbed Half Dome the previous day and they told us the first wave of day hikers seemed to arrive around 9:30 am. Based on that, we planned to get up and on the trail by 5:30 am, so that we could climb Half Dome and get back down the cables section before 9:30 am.

We managed to get on the trail just a few minutes behind schedule (despite Nathan’s alarm being set for weekdays only… at it was a Saturday) and we quickly covered the 2 miles up to the sub dome. The sub-dome is sort of like a shoulder on the side of Half Dome, and the trail is very steep with huge granite steps and requires some rock scrambling at the end. It is the first sign of what you are about to get yourself into. 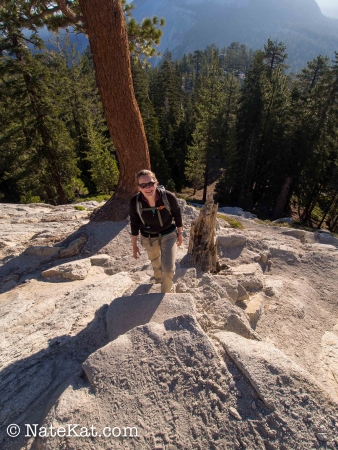 Around 7:15 we reached the base of the cables and had our first up-close and personal look at the cables. They were actually more intimidating and looked steeper than Katharine expected, but Nathan was pleasantly surprised to see 2x4s between the posts, acting like a ladder and giving you a place to ‘rest’ along the way. (As usual, Katharine already knew about these rungs from all her research for the trip). We finished our breakfast as we watched a few people start the climb up the cables and developed a strategy for our own ascent. 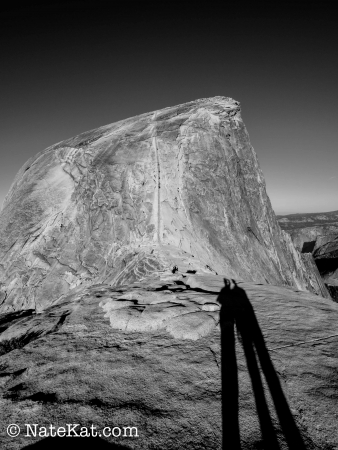 Finally we felt mentally prepared, put on our mechanics’ gloves (an absolute must for the cables), and started up. Katharine was in the front, and we alternated as we each went up one rung at a time. The cable poles and rungs are about 6-8 feet apart, so this was a pretty slow way to do it, but kept us focused and since there was no one else around, we didn’t feel rushed. We stayed just one or two rungs apart so that we could talk throughout and keep each other on track. Neither of us looked down once during the ascent. We were more concerned about our safety, so we didn’t take any photos while we were on the cables. 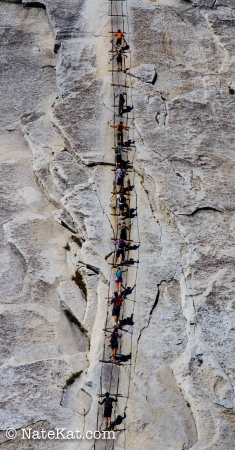 The middle section of the cables is the steepest and most challenging. You are ascending almost entirely using your arms pulling yourself up on the cables, and the granite is smooth and worn from so many people before you that your feet tend to slip and slide. Each 2×4 rung was a welcome relief (although a couple were not quite as stable as we would have liked) and you still have to always hold on tight to the cables. The span between each rung was slightly different due to the rock face and how the cables were strung, so we never really got comfortable with what we were doing.

As we were almost done with the tough middle section, two guys passed us coming down. They were very encouraging and considerate as they passed, making sure to do so safely, which we greatly appreciated. Other than that, we didn’t come across any others on our way up.

After about 30 minutes of mentally intense climbing, we reached the top safely! The sense of accomplishment (and relief) outweighed the amazing views from the summit. There were only 5-7 other people at the top when we arrived, so it was nice to have plenty of space, but also other people to share the experience and take photos for each other. 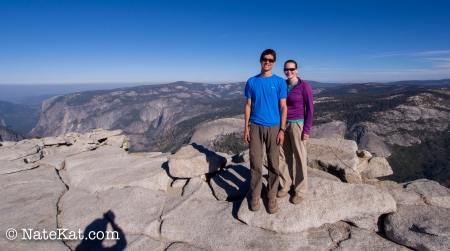 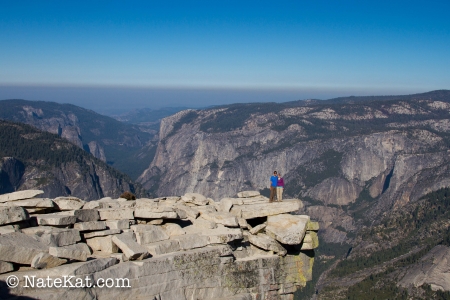 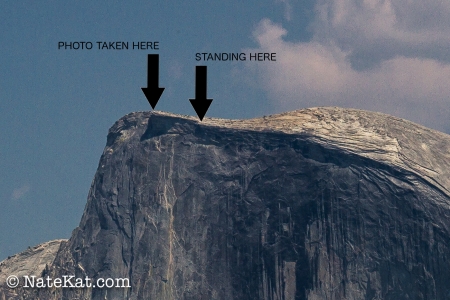 Just when you think you are crazy, someone else is willing to go a little farther.

Before we knew it, we had already been up there 30 minutes and it was getting close to the time that we expected to start seeing the crowds of day-hikers so we got ready to head back down. We were almost more nervous to go down because you have to look down at where you are going, but you actually go down backwards as if you are rappelling down. Once we got our technique figured out, it really wasn’t too bad though. On our way down, we passed a guy headed up by himself who was doing it for the fifth time. He said he does it about every other year, which gives him enough time to forget how scary it is. He also mentioned that before they implemented the strict permit system, the cables were so crowded that people going up were between the two cables and people going down had to be on the outside. Just the thought of stepping outside the cables made our stomachs churn.

When we got to the bottom we both looked at each other in relief and agreed we’d probably never do it again. It was a rewarding experience, but we think once is enough. 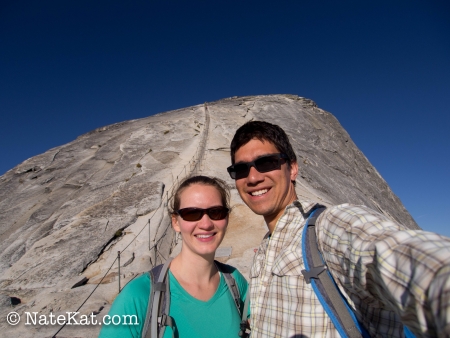 At the base of the cables, we watched as the day-hikers started to arrive and start up the cables. We noticed one couple that didn’t seem to have gloves, so we insisted they take ours. They were very grateful, but we’re sure they were even more thankful halfway up. We also realized that if we had been 30-45 minutes later, we would have had to pass three times as many people on the way down. As we headed back down the sub-dome, we started to see much larger groups of people and everyone was asking how crowded the cables were. We could definitely tell that soon it would be very different from the calm experience we had on the cables.

Once we got to the base of the sub-dome, we were greeted by two park rangers checking for permits with an iPad to cross-reference. We had started up so early in the morning that we had beaten them there. We did see them turning away anyone without a permit, including a guy who came all the way from France.

We made it back to our campsite for lunch and took an hour or so to relax and rest our feet before starting the long backpack down to the valley floor. Although it was only 7.5 miles, it was incredibly steep downhill with tons of granite steps along the Mist Trail. We knew the John Muir trail would have been an easier (less steep) option, but the Mist Trail was our last chance to see a waterfall in Yosemite, so we took it. The jury is still out on whether this view of Vernal Falls was worth the pain. We can say for sure that the trekking poles from Katharine’s coworkers were a lifesaver! 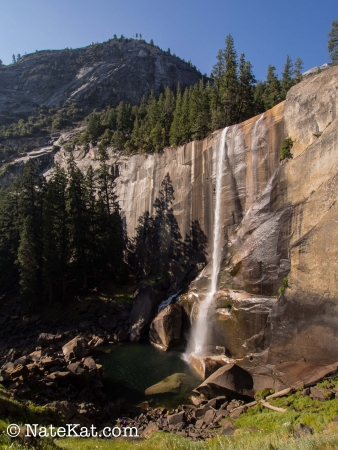