You are currently browsing the monthly archive for July 2013.

In early July, I was lucky enough to get to go to Australia for a business trip. Even better, I got to spend several extra days exploring Melbourne, Sydney, and the surrounding countryside with my coworker. We had an amazing time touring Melbourne, seeing the Sydney Opera House, feeding kangaroos, seeing wild koalas and wallabies, watching the Little Penguins of Phillip Island, and doing a tour along the magnificent Great Ocean Road. Check out the photos below for a quick look at it all we did. Click an individual photo for full screen/slide show mode and the captions/descriptions will show up. (Don’t click ‘show as slideshow’.)

On Memorial Day weekend, we originally planned to go backpacking, but life sort of got in the way so we decided to do a local hike up to Inspiration Point with some of Nathan’s coworkers. We followed Modern Hiker’s route, which is a strenuous 10.5 miles with 2700′ gain. We’ve been up as far as Echo Mountain before, but we’ve always wanted to go all the way to Inspiration Point, especially since the trailhead is only 10 minutes from our apartment.

Luckily we got an early start and enjoyed the shade most of the way up. The climb was tough, but the group kept a nice pace and made good time. 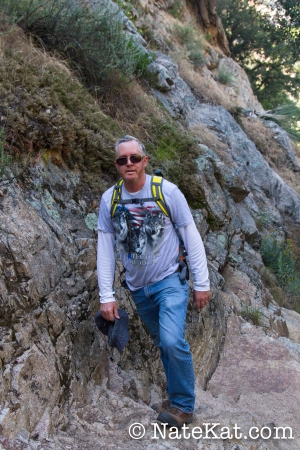 The view from Inspiration Point really is great and worth the extra effort although it was pretty foggy when we were up there. There are a bunch of viewing tubes which would have been fun on a clearer day. 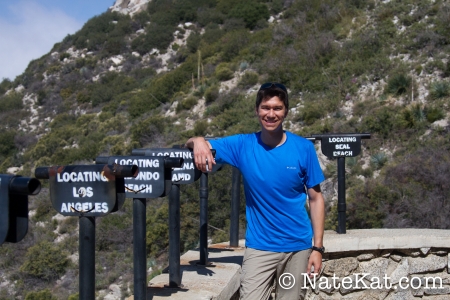 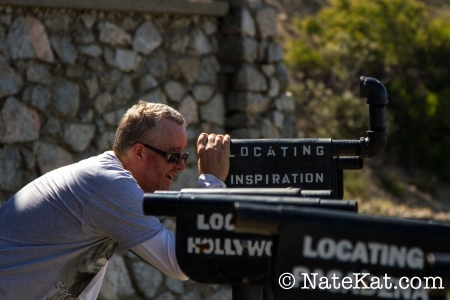 We also appreciated that there are much fewer people willing to go so far, so you can enjoy some peace and quiet (while Echo Mountain is more of a zoo).

The hike back down felt a bit long, but the views overlooking Pasadena were great and kept us going.

It was a perfect day in the local mountains, thanks to Nathan’s coworkers for joining us! 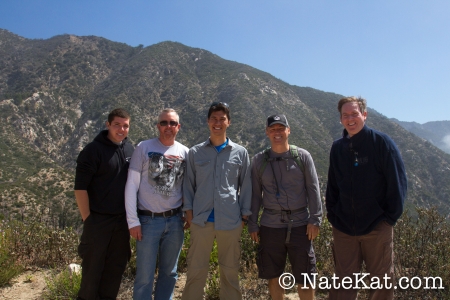 We headed to Dana Point with Nathan’s parents to try to observe bioluminescence organisms with the Ocean Institute.  It was a new moon and the weather was cooperating, but in the end the night cruise turned up a bit disappointing display of bioluminescence.  There is always some bioluminescence, but to really get the ‘wow factor’ you need a bloom of organisms that make the water glow instead of just a few sparks in the water.  The fog quickly surrounded us making it hard to see any faint horizon line at night.  We then got a little sea sick as the boat turned parallel to the waves and rolled back in forth in the fog. We were quite happy to make it back to calmer waters. On the way out to sea they pointed out some curious animals that are active at night including a few different types of birds and some new seal babies. The trip was a little expensive for a night cruise in the fog, but the crew was knowledgable, and if there was a way to predict that there would be a bioluminescence bloom happening on a particular night, then we would definitely recommend it.

Several weeks later, Katharine was camping at the beach north of Malibu (Thornhill Broome Beach) with two of her friends who were visiting LA. The waves were huge and crashing with quite a lot of force on the steep beach. As the sun began to set, we noticed that the waves seemed to be glowing and once it was fully dark, it was an amazing, indescribable show. The white water portion of every wave would glow in a very brilliant blue/green, then dissipate as the waves settled. It was probably a once in a lifetime experience; we talked to other campers who had been there for a whole week and only saw it that one night. Unfortunately Nathan wasn’t there to see it or capture it with his camera. Kim managed to get these photos of the waves and our tent with her camera; it’s a bit blurry, but it gives an idea of how bright the glowing was. 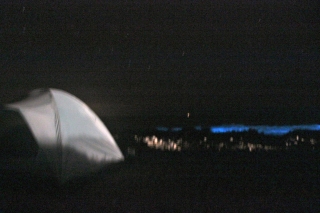 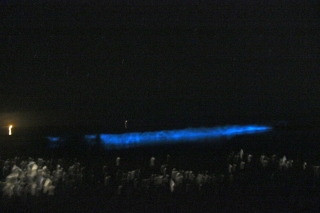 Other photos from the Ocean Institute boat trip:

More hikes from this spring

In May we revisited a couple local hikes because we needed to get out on the trail, but didn’t have time for long drives or lots of research.

One weekend we returned to everyone’s favorite peak in the LA area, Mt. Baldy. Last year we did it as an intense training hike, but this year we decided to take it easy and use the Chairlift to skip the more boring parts. We had a pretty uneventful hike and made good time despite a late start. The chairlift was definitely a good choice, but we were a little surprised how expensive it was ($25/person roundtrip).

The following weekend we returned to Switzer Falls, along the Arroyo Seco. We actually skipped the side trail to falls, intending to go to Royal Gorge (per Jerry Schad’s Afoot & Afield), but unfortunately the trail we planned to take was still closed due to the Station Fire of 2009. So instead we just continued along the regular trail towards Bear Canyon and still enjoyed the stream-side trail and beautiful pools.

We also got a chance to test how how we can upload tracks with photos to google maps using the Accuterra/NeoTreks App on our iPhones. We’ve been using the app for a couple years now as our only hiking GPS and highly recommended it. We hope to use this uploading feature with the photos to share some of our hikes from our epic trip this summer/fall.

So as many of you may have heard, we are moving to Pennsylvania! We are finishing up our jobs this week and will be spending next week packing and tying up loose ends.

Of course we couldn’t just make the move and rush through a cross-country drive in a few days, only seeing the rest stops. Instead we decided to take this move as an opportunity to take a couple months off work and explore the parts and parks of the western US that we haven’t had a chance to yet. So we created our own ‘epic’ ~75 day, 10,000+ mile road trip through 18 states and 20 national parks!!!  We hit the road on August 4th from San Diego and start heading up the west coast.

View NateKat Epic Trip Overview in a larger map
.
We invite all of you to follow us on our trip as we will be updating our website with photos, trip reports, and our progress when internet is available.  We plan to camp about 40 of the 75 days which also includes about 10 nights backpacking where we will be completely off the grid. If all goes according to plan, we will summit Half Dome in Yosemite, traverse the Teton Crest Trail, and cross the Grand Canyon from rim to rim.

Here’s a quick look at the National Parks we will be visiting, in order of the trip:

We’ve only been to 5 of the 20 parks before, so this trip will definitely add to our life list, and we’ll get to see an amazing array of scenery and wildlife.

We can’t wait to get started and hope you enjoy following along with us!

Back in early May we re-visited Mt Islip, a hike that we failed to summit on our first attempt last year due to snow and ice on the trail. Mt. Islip is actually in a really nice area of the San Gabriels so we were glad to have a second chance at it. This time we tried a different route, from the south at Crystal Lake (rather than from the north from the Angeles Crest Highway). We always like to take a new route when we repeat a hike if possible, and the southern approach is longer and requires more elevation gain, so it was a good conditioning hike (7 miles, 2200′ gain). It was a very cold and foggy day, similar to the weather on our first attempt, but this time there was no snow so we started up the quiet trail. 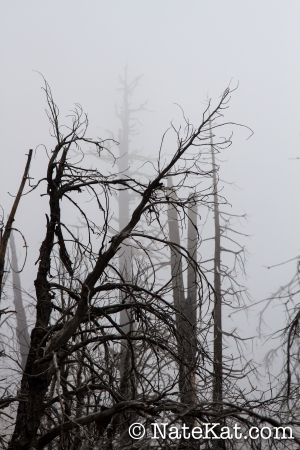 Low fog hung just a few hundred feet above us so even with the elevation gain we were about to attempt, it was obvious the view was not going to spectacular. 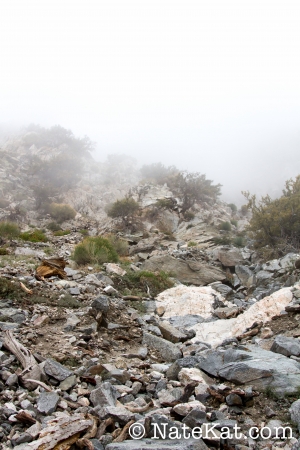 The trail is like most higher altitude Angeles forest trails where the plants struggle to survive.  The granite gravel soil arid weather, and occasional fires keeps the vegetation to a minimum.  Today the cold winds pummeled us against the mountain causing us to wear all of our layers of clothes along with hats, gloves and ski masks. 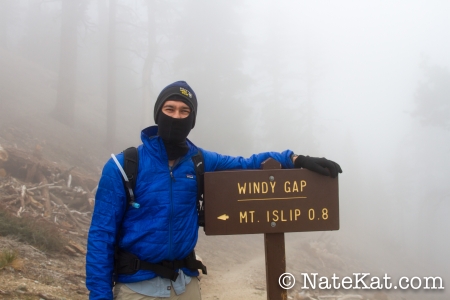 We were able to witness a phenomenon that we’ve heard of, but never seen before – in the extremely foggy air, the evergreen needles collected enough moisture to cause rather significant showers behind (downwind) of each tree. The process was efficient and pretty amazing to watch, but actually managed to get us quite wet. 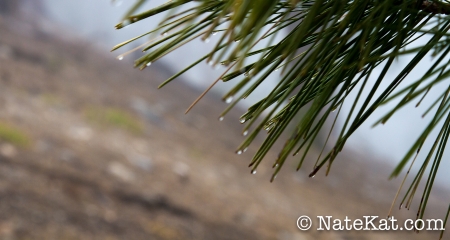 At the higher altitudes, the condensation was actually freezing on the trees and then would get blown off the trees, causing small showers of ice shards. 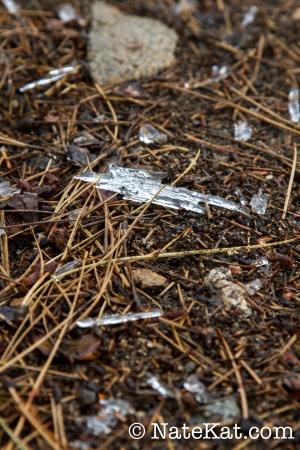 We finally made it to the top and like most trails in LA, even though we didn’t see many people on the trail, there was a huge crowd at the peak!

Although the weather was miserable and the views were non-existent, we were glad to summit and check this one off our list!