We celebrated our one year anniversary (and Labor Day) by driving up Highway 1 and visiting the most stunning coastline in California. 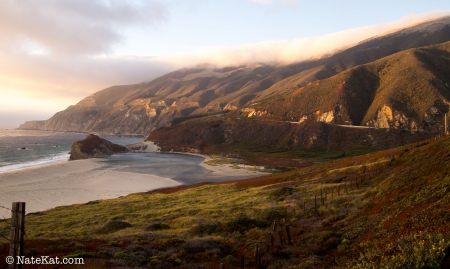 We stayed at Glen Oaks Big Sur,  which was really just a small cabin amongst the redwoods just off the highway.

As usual Katharine, being the great planner that she is, not only picked a place with great amenities but one that was centrally located to minimize the time spent in the car.  The small cabin had a microwave, small refrigerator  and best of all heated bathroom floors!  That way when you step out of the shower or are brushing your teeth, the floor is just slightly warmer than your feet, which is a surprisingly amazing feeling.  It also didn’t have a TV which may turn some people away, but right now we will choose a fire pit over a TV almost any day. 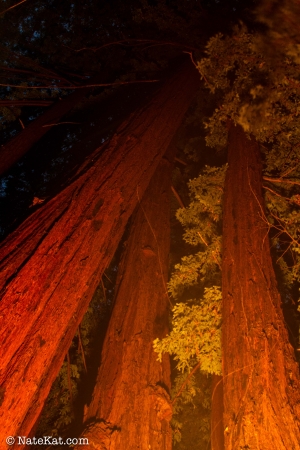 Redwoods in the Camp Fire Light

The first morning we went to Point Lobos State Reserve and it was clear, but the clouds were moving in fast. 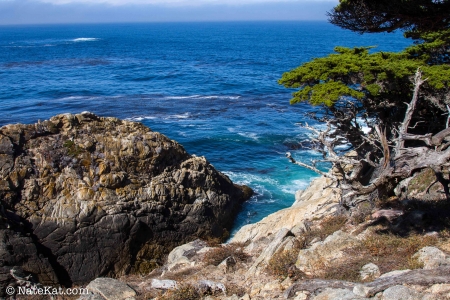 The increased coastal moisture makes for some interesting fungus on the trees. 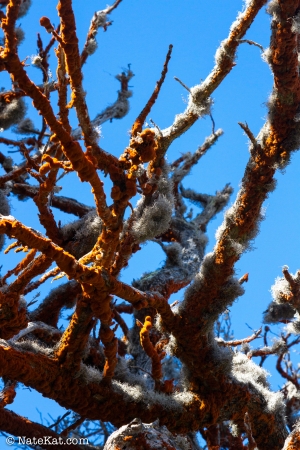 Once the clouds socked in the coast we hiked a couple short trails with trees covered in moss (Lace Lichen Trail).  We had a little fun with moss, I’m sure other people walking by thought we were weird. 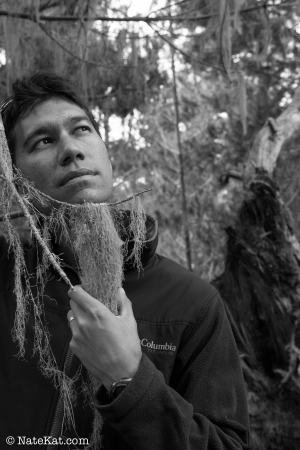 The clouds lifted a little, but just in select areas.  We drove up and down the coast looking for a clearing, but got mixed results as you can see. 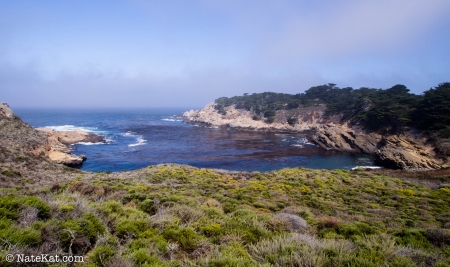 Midway through the day we gave up on the coast and headed inland to do some hiking in the redwoods.  The redwood groves weren’t nearly as big as other further up the coast in Redwoods National Park, but it was nice to get some excercise after sitting in the car for the last couple of days. 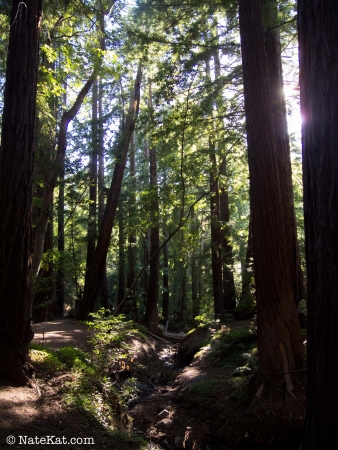 Then we headed to Pfeiffer Beach for sunset. Pfeiffer Beach is a relatively unknown spot in Big Sur since there isn’t much signage on Rt. 1, it has pretty rough road to access it, and there is only extremely limited parking. So it’s much less crowded than it would otherwise be given that it’s a beautiful beach with amazing rock formations and purple sand. Even on Labor Day weekend just before sunset we were able to get a parking spot after just a ~20 minute wait. 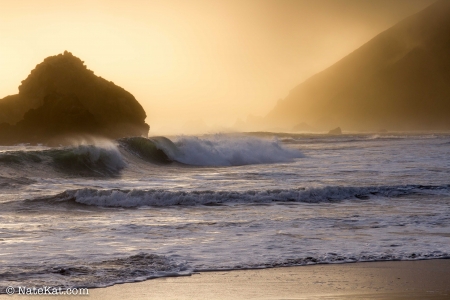 Certain areas of the beach had very purple sand, especially near the bluffs due to the manganese garnet in the hills. But as the light faded it became harder to see the color and the temperatures started to  drop causing us to head back to the car.  Although we were able to stay much longer than others since we brought our down jackets and gloves 🙂

We had dinner at Ventana Inn, which was pretty fancy compared to our Mountain House freeze dried foods we had the weekend before when we were hiking Whitney.  This was definitely a different style of vacation for us, but the more relaxed setting was much appreciated.

The next morning the clouds were stil hugging the coast and preventing us from taking more photos.  We checked out McWay Falls, one of the few waterfalls that actually empties out into the ocean, but the fog made it a little less dramatic than we were hoping. 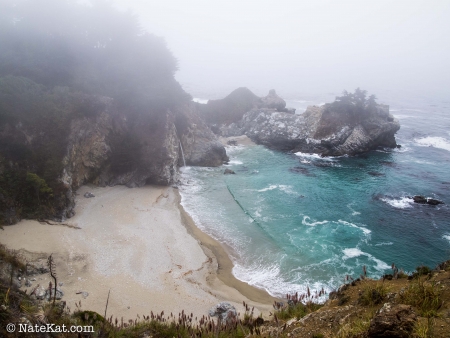 Since the coast was so foggy we decided to head back a little early to get a head start on the long drive. On the way back we stopped to check out the elephant seals at Piedras Blancas again, which were small in numbers compared to what we saw during the breeding season, so we spent some time watching the parasurfers instead.

All in all the trip was relaxing and different from our many summit hikes we had been doing all year.  We wish the clouds would have cleared more for some coastal photos, but that just gives us a reason to visit again!