You are currently browsing the daily archive for October 18, 2012.

Well it’s all down hill from here!  Over the next 24 hours we would descend over 6,000 feet and 11 miles back to Whitney Portal.  On the way down from the summit we gave a few struggling hikers some words of encouragement as they were close to the summit, but as the sun started to get low in the sky and stragglers further from the summit asked us “am I close?” we tried to stay objective as possible letting them know how many miles were left, knowing they would probably reach the summit in the dark.   Once we reached Trail Crest no one else was headed up and we were all eager to get back to Trail Camp. 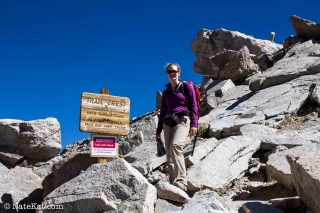 We tried counting the 99 switchbacks but tired and thinking about dinner we lost count around 15 or 16.  About half way down the switchbacks we were surprised to see a find a small group of young guys in t-shirts, no backpacks, and sledge hammers!  We had a brief conversation with them and found out they were the trail maintenance crew and would be working on the trail until they got snowed out.  Their job was to clear rock slides from the trail and shore up eroded areas.  We expressed our hope that they get paid well but they replied they do it mostly for the view.  We couldn’t imagine not only hiking up and down these trails everyday carrying pick axes and sledge hammers, but also doing it at 13,000+ feet!  These guys were insane, but to be honest they looked like they were having a good time. 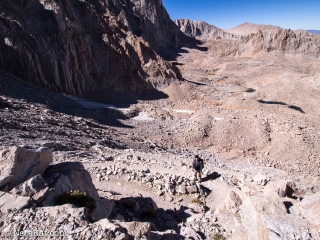 Shortly after our conversation with the young trail maintenance team we were passed by the older park rangers who were doing maintenance on the summit hut. 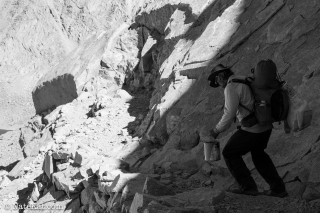 Hope that paint can is empty!

We were thinking they should at least splurge for a paint can with a plastic handle.  Anyway these guys were also in good spirits talking about how they couldn’t wait to shower and drive a car!  Apparently they had been camping for a couple months and were finally done with their work.

At the bottom of the switchbacks we ran into two guys staring at the switchbacks discussing.  At this point the mountain shadows were shading the trail and to start up them at this time would be crazy in our opinion.  The two also had full backpacks and were obviously equipped to stay at Trail Camp, so we had to ask, “where are you headed?”  They responded “just trying to get out of the Whitney Zone so we don’t have to use a wag bag.”  We couldn’t help, but grin and wish them on their way.  Not sure if we mentioned it, but the Whitney Zone is a pack it in and pack EVERYTHING out kind of place.  We’ll let you figure out the rest.  After a long discussion the two headed up the switchbacks.

Once again the night was cold and restless, but we would rather sleep in the cold than hike another 5.5 miles in the dark.  Once we started packing up our gear the next morning, the marmots started coming out of the woodwork.  I’m guessing it’s part of their normal routine to scavenge newly vacated campsites. 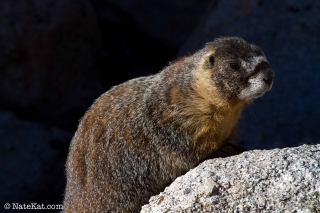 As we started hiking out of Trail Camp the wind was picking up catching some backpackers off guard who setup their tent when the wind was calmer. 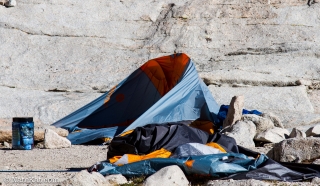 Even though the hike back was just a short 5.5 miles all downhill the last few switchbacks seemed never ending.  In the end it was completely worth it to stand on the top of Mt. Whitney and enjoy the amazing french fries at the Portal that are cooked in peanut oil! 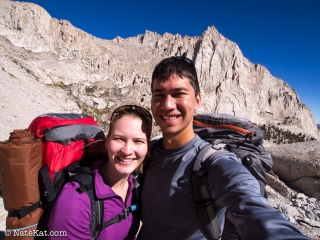