You are currently browsing the daily archive for September 30, 2012.

It’s now been about a full month since we tackled Mt. Whitney, so our trip report is a long time coming, but we needed a break and time to edit all the photos!

After 5 months, over 145 miles of hiking, and 42,000 feet of elevation gain in training, we finally got our chance to climb Mt. Whitney at the end of August.  Our plan was to split the 22 mile round trip, 6,600 feet of gain adventure into 3 days. We’d use the first day to climb up to Trail Camp, day 2 to summit and return to camp, and day 3 to hike back out to the trailhead and drive home.  A couple days before our trip we were able to get a last minute permit online allowing us to enter the Whitney Zone on Sunday, August 26th, our #1 preferred date. Getting the permit ahead of time was a huge relief, and Katharine was able to eliminate all the alternate itineraries depending on when we would get a permit.

As with many of our trips we left Friday night arriving at Horseshoe Meadows Campground near midnight.  This campground is a common acclimating campground for Mt. Whitney trekkers because it is above 10,000 feet, but it’s also the trailhead to other areas in the Sierras.  Being a staging area there isn’t a lot of late night campfires and kids running around, but instead it was completely dark and silent except for the occasional snore.  We were startled when there was a low growl from the truck next to us as we unpacked our tent in the dark, but it turned out just to be a snorring camper.  We are now a well oiled machine and can setup our camp in the dark and with little verbal communication.  Our gear is organized by time of use and is easily transported in bins to reduce trips back and forth to the car.  Within minutes we find ourselves turning out our headlamps and enjoying the silence of mother nature as we fall asleep.

The next day (Saturday) we took a short hike to help acclimate to the altitude and stretch our legs.  About 2.5 miles in we came to a clearing with a small stream perfect for wildlife. 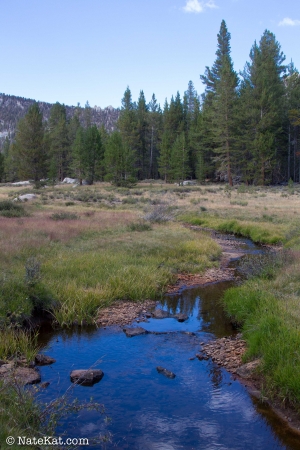 We slowly walked along the tree line until we spotted a doe grazing in the meadow.  Nathan quickly dropped his pack and took cover behind a bush as if he was a covert operative sneaking up on his target.  After closer inspection two fawns wandered into the open. 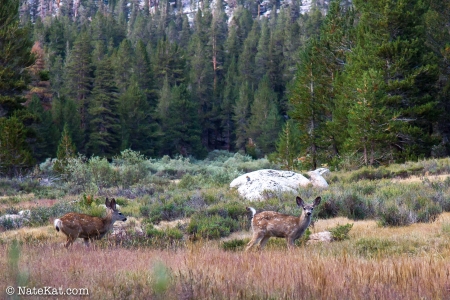 All three sets of ears perked up as Nathan got closer and then they quickly turned and bounded across the meadow.  Besides the deer the short hike was uneventful, but a useful warm up hike.  We returned to camp and continued to go over the plan for the next day (Sunday)- our first Whitney day. We got everything organized and ready to pack our packs so that we could get an early start on Sunday. 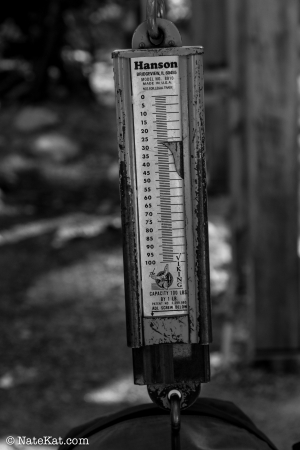 The trail starts with switchbacks cutting through the granite and trees lining the mountains around Whitney Portal.  The dry dusty trail was broken up with the occasional stream, which weren’t too hard to cross this year. 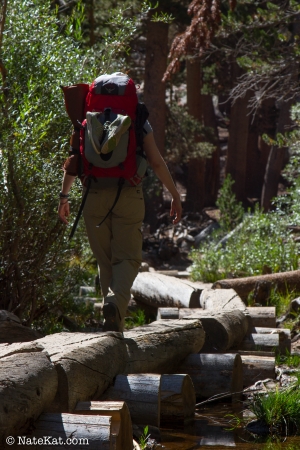 After 2.8 miles we reached Lone Pine Lake at 9,960 feet.  It provided a nice place to rest, have a snack and check our progress for the day.

Lone Pine Lake doesn’t require a permit for day hiking since it is just outside the Whitney Zone, but overnight camping still does – it would be a nice place to camp and fish though. 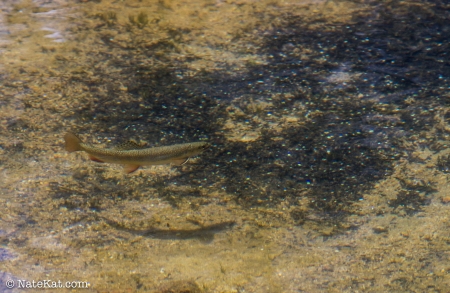 We then crossed into the Whitney Zone and soon reached a lush meadow just before Outpost camp. We had considered camping at Outpost because many people can sleep better at the lower altitude compared to Trail Camp (10,360′ vs. 12,000′), but given our good experience sleeping at the trailhead for White Mountain, we were pretty sure we’d be fine at Trail Camp, which would make our summiting day much shorter. So we took a short break to check out the waterfall, but quickly continued on. 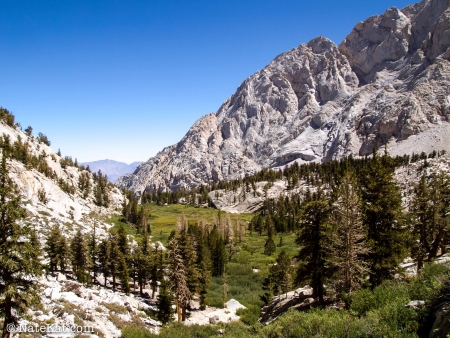 After 4.3 miles and 2,300′ of gain we came upon Mirror Lake (10,640′).  Since we only had about 2 miles left to Trail Camp, we took a longer break for lunch and rested our feet.  Finally we put our boots back on and continued the climb, which gave us great views of the lakes and valley below.

If you click to enlarge the photo below, you can see Lone Pine Lake in the center which is a dark blue and just to the left Mirror Lake which is more of a green color. 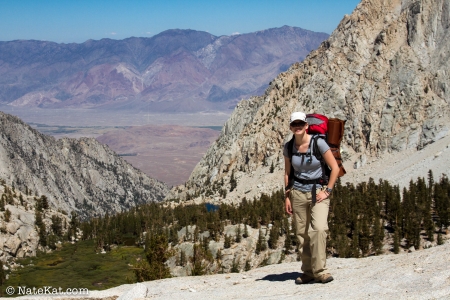 Just above Mirror Lake we spotted 3 young, but large birds roosting in a tree. 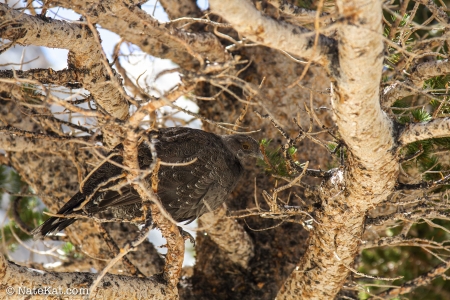 If someone knows what kind of bird this is let us know.  It was the size of a full grown chicken.

The trees became more sparse around 11,000 feet and the trail became more rocky.  It became much more apparent as we got closer to trail camp that this place was not your average backpacking trip.  Also at this elevation we saw other backpackers starting to struggle with the altitude and slowing down quite a bit.

Soon we made it to Trailside Meadow (5.3 miles in, 11400′), which is a lush green area with a running stream in the midst of all the dry granite. It’s a beautiful place to take a rest or filter water. 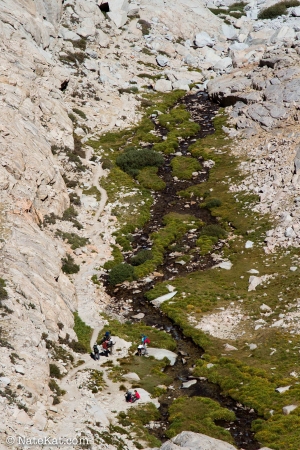 The last push up to the camp definitely feels longer than it should, but the views of bright blue Consultation Lake distracted us from our burning legs and motivated us on. 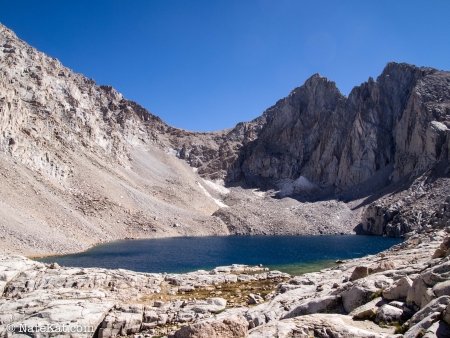 When we reached Trail Camp we were feeling good.  The training was definitely paying off! We quickly found a spot out of the wind and started setting up our tent.  It was a little disappointing to see how much trash and toilet paper that could be found under any rock, but it wasn’t as bad as some make it out to be.  We were eagerly greeted by an opportunistic marmot, which was living in the rocks next to our tent. 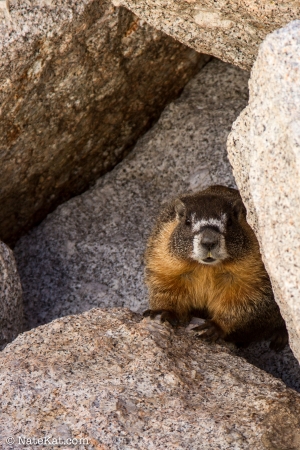 Marmots are pretty cute and easy to photograph, but can be mischievous so you have to always be watching your food.

Once the sun set, the temperature dropped rapidly from the 60’s to the low 30’s.  Nathan took a couple photos of Mt. Whitney moonlit before we headed to bed. 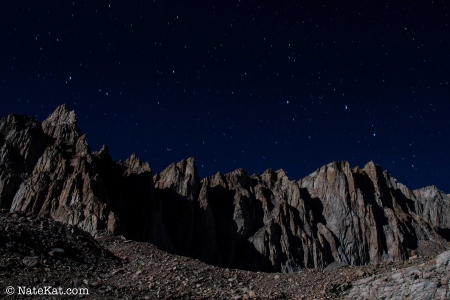 The temperatures were below freezing, making sleeping on a granite slab a little bit uncomfortable, but totally worth it. Our anticipation for the next day kept us awake a little longer than we intended, but the tough hike up to Trail Camp had definitely tired us out, so that helped us fall asleep early enough to get some good rest for the summit attempt.