You are currently browsing the monthly archive for August 2012.

The goal of our training hike #8, Telescope Peak, is located in Death Valley National Park and considered the highest vertical rises in the lower 48 states.  We left work Friday night, grabbed dinner, and hit the road knowing we would be arriving at the campground around 1:00 AM.  After several hours of driving we left the city lights behind us and were absorbed into the darkness.  With just a sliver of moon hidden in the clouds we crawled up the mountain arriving at a secluded and quiet campground.  The next day we woke up to find ourselves camped in a grove of pine trees with Death Valley one side and mountains blocking our view of Telescope Peak. 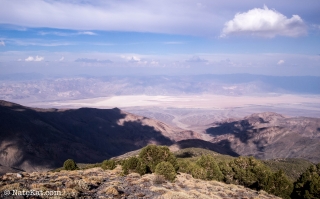 We hit the trail early in the day wrapping around other peaks until we finally got a good view of the summit. 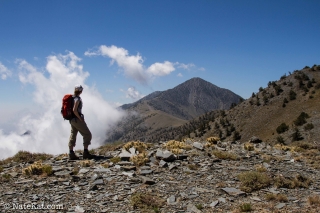 The terrain quickly changed from pine trees to a vast open rocky area with short vegetation including cactus, which could make for a painful mis-step. 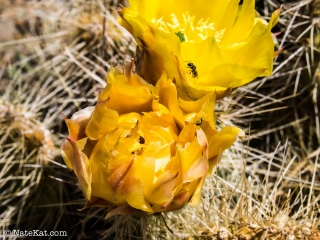 The clouds were rapidly forming in the valleys below then would rise up over our heads and evaporate into the blue sky.  The process was mesmerizing watching the clouds roll and transform then disappear. 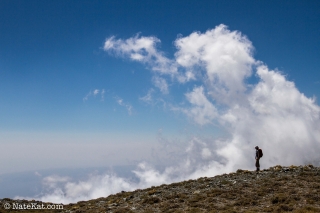 After five miles of almost hilly terrain with a slight elevation climb we hit the dreaded switchbacks that would take us up the mountain.  The switchbacks were tough, but before we knew it we were hiking along the ridge to the peak.  Sadly the clouds became denser and completely blocked our view of Death Valley below.  Telescope peak stands at 11,050 feet, normally giving you an incredible view of Badwater (a salt flat and the lowest point in North America) and the surrounding mountains including Mt. Whitney.

We thought it was funny to hike to the top of the highest point in Death Valley only to find an Iowa Farm Bureau Federation first aid kit. 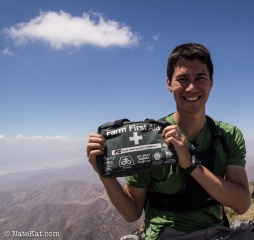 It was now mid afternoon and the clouds weren’t clearing so we headed back down through the foggy bristlecone forests.  We had not see another person the entire day, which led to us startling some deer and a covey of quail along the trail.  Halfway back we did come across some a backpacker’s tent, but we were the only ones to summit Telescope that day.

We watched as massive thunderhead clouds built up over Death Valley wondering if (and worried that) rain might be in our forecast.  Instead we were treated to the most awesome light show nature can provide.  The clouds lit up with heat lighting like strobe lights. The sky wouldn’t be dark for more than 5 seconds before another white flash lit up the texture in the clouds.  This in its self was incredible but because of our high vantage point, the isolated clouds, and minimal moonlight, the stars lit up the sky above the clouds. The Milky Way was clearly visible.  This provided one of the most impressive backgrounds to a lighting storm that we had ever seen! 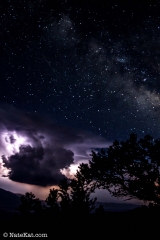 We took photo after photo trying to balance the light between the stars and the lighting. 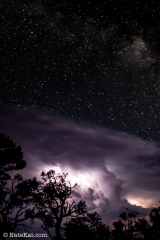 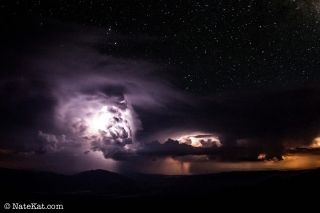 After a while we started seeing bolts break through the clouds and occasionally one reach for the ground.  We eagerly changed our strategy to capture a bolt but not keep the shutter open too long and get short star trails.  After many tries we were able to capture a few bolts without blurring the stars too much. 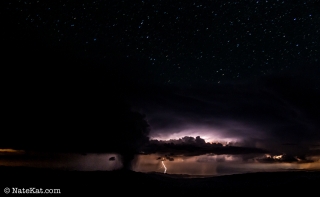 Once the lighting decreased and the clouds started blocking the stars we packed up the tripod and walked back to camp with our headlamps.  This was one of our most memorable camping trips not for the hike, animal sightings, or terrain, but for the incredible light show of lighting with the Milky Way backdrop.

The next day we left the 8,000 foot high campground at 70 degrees and headed into Death Valley at sea level, which rose to 110 degrees.  Since we’ve already been to Death Valley, we just quickly hit a few sites while jumping in and out of our air-conditioned car. 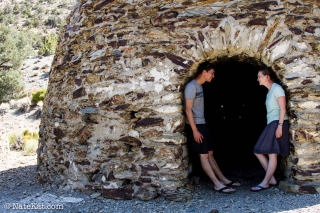 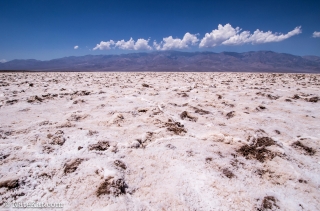 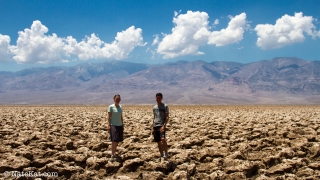 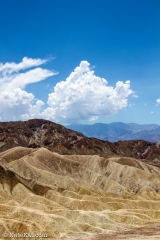 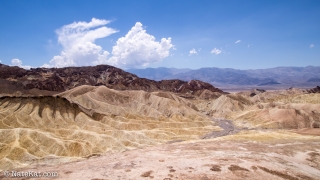 After a full summer of hiking and backpacking we are finally headed to Mt. Whitney this weekend!  You can track us using the link below.

We actually managed to reserve an entry permit for Sunday which was very exciting and relieving as it allows us to have a more set plan for the trip. We now have all day Saturday to relax and acclimate, then we begin the Mt. Whitney trail on Sunday. We plan to summit on Monday and hike back out on Tuesday.

We had a very successful summer training program, completing all of our training hikes (although we are clearly behind on trip reports). We are feeling pretty confident for Mt. Whitney especially after summiting White Mountain, another peak above 14,000′ without any major signs of altitude sickness!

After all the preparing and training, now we just have to hope for good weather and a safe trip!

We took a break from our high elevation peak climbing to spend some time hanging out with Katharine’s brother Rick.  Rick was in town for a wedding and a camping trip with old college friends so we tagged along (because we haven’t done enough camping this year).  It was definitely a change from the backpacking and hardcore hiking, but it was fun to lounge around, eat steak, drink beer, and share stories. 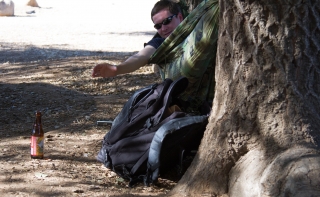 Next time make sure the beer is closer to the hammock 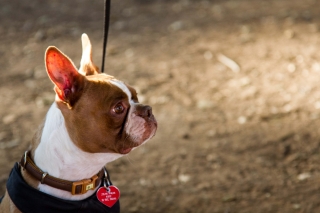 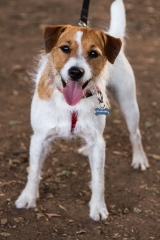 We also had a good time playing with the two dogs and wish we had the time to have a dog of our own. 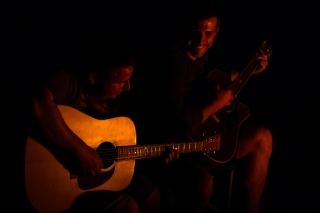 The night was filled with laughter, acoustic guitar and the crackling campfire. 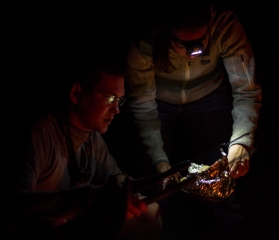 There was also some Jiffy Pop successfully cooked over the fire by the only two people patient enough to slowly heat the kernels. 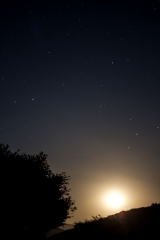 The full moon rose above the horizon brightening the sky.  Every once in a while the moon surprises us like this and it takes us a few moments to realize it’s the moon rising.

While everyone else slept in I headed out with my camera to see what I could find.  I found a few lone fisherman gliding through the morning fog waiting for a morning bite.

While headed back to camp I could see a covey of quail feeding under a tree.  I quickly moved toward the tree but the skittish birds took to flight with their characteristic flushing sound.

Once everyone woke up, some helped to cook another gourmet meal on the campfire while others played keep away from a Buckie, an energetic terrier. 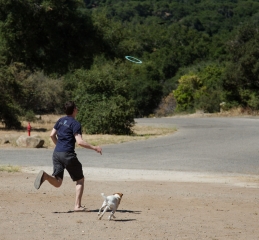 We had a great time and appreciated the chance to relax!

Mt. San Jacinto was #7 on the list of training peaks, which we did at the very beginning of July as a 2 day backpack.  We’ve been so busy hiking on the weekends we’ve fallen behind on our trip reports!

Knowing we only had about 4 miles to hike to our campsite we decided to take our time Saturday morning packing before we headed out.  This is one of the advantages of living in LA – in just 2 hours you can be standing at the foot of Mt. San Jacinto, a pretty major peak at 10,500′.  Since we had such a short trip to the campsite at Strawberry Junction, we decided to take a side trip without out packs to Suicide Rock, which overlooks a valley. Suicide Rock is also on the 100 Peaks list, so it was nice to check off an easy one. 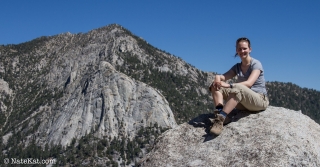 The giant granite faces almost give it a Yosemite feeling.

Even with a late start and the side trip we arrived before sunset with plenty of time to setup camp and have dinner. Unfortunately Strawberry Junction does not have a water source so we had to carry up enough water for the whole day, cooking dinner and breakfast, and for the first couple of miles on Sunday. Other than that the campground was really nice with lots of privacy for each site. 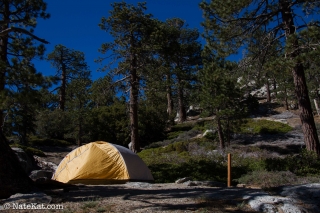 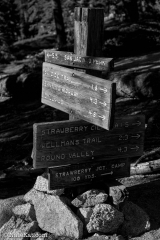 The hike up was challenging, but we had some fun jumping in shallow stream crossings as hardcore day hikers passed us.  The terrain was either dry and rocky or lush and green around the springs.

Once we made it to the top we cooked our favorite turkey tetrazzini and looked out toward Old Gray Back (San Gorgonio), which would be peak #8.

While we were at the peak enjoying the view a small cloud of smoke started to appear near the bottom of the mountain.  As the smoke grew and grew everyone started to talk about the fire wondering where it was exactly, but most people had nothing to worry about since they had parked and taken the tram up on the opposite side of the mountain. We of course we did not… our campsite with all our gear was 6 miles down the mountain in the direction of the fire. Luckily it was much farther off and we later found out was put out very quickly, but apparently it did briefly close the road we traveled home on.

After deciding not to worry too much about the fire, we headed down the mountain and back to our campsite on a different route that was slightly longer, but less steep and easier on the knees. One section where we picked up a portion of the Pacific Crest trail was one of the most beautiful sections of the trail, with impressive views of the granite cliffs. We were glad to have the scenery to keep our mind off the never ending miles of downhill trekking. 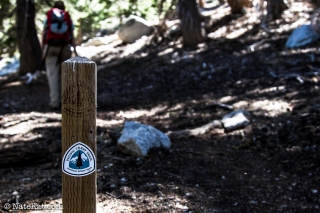 We finally made it back to the campsite and packed up our tent and other gear, then started down the last 4 miles.  By this point we were definitely ready to be done and tired of going downhill, but we pushed through and just barely made it within our target time of 10 hours for the day.

After we reached the car Katharine realized she had taken a bit of the trail with her…  Even though she was wearing long pants all day somehow she ended up with some impressive dirt lines. 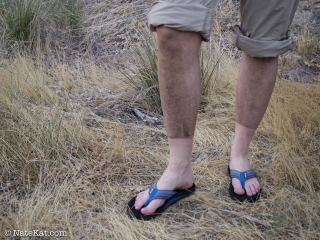 All in all it was a challenging weekend backpacking trip but helped us feel more prepared for Whitney and it was nice to finally conquer the mountain that we had to turn back on last time just 0.5 miles from the peak.

Santiago Peak via the Holy Jim Trail in the OC was #6 of 10 in our training for Whitney and it was not exactly our most favorite hike…  To start we had a pretty long drive down to the OC, then there was a fun few miles of off roading in our Subaru but the majority of the time was spent behind a Hyundai that looked lost amongst the Rubicon Jeeps.  Once we finally made it to the trailhead it was already quite hot and we knew the lower elevation wasn’t going to give us any relief. 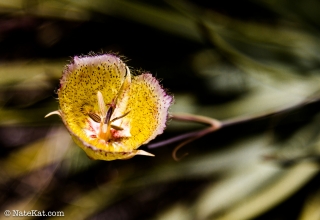 The hike was long and slow, winding our way up the chaparral paths and sharing the fire road with pickup trucks leaving us in the dust literally.  The 5,689′ peak didn’t have a spectacular view compared to the 10,000 foot mountains we were used to.  The peak was covered in utility buildings and groups of off roading vehicles. 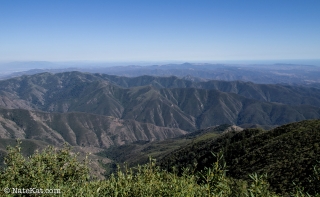 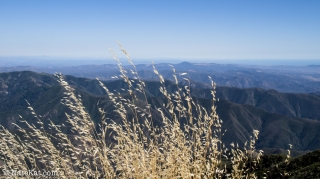 Although the view and terrain were by no means spectacular, the hike did what we needed it to do… kick our butts.  It was a long 15.5 miles and 4,450 feet of gain.  We left sore, hot and tired, but were looking forward to taking on Mount San Jacinto, a mountain that denied us a summit a couple years ago.