Every time we go on a day hike, we always try to get an early start. Katharine can be particularly slow in the morning, but for our hike to Cucamonga Peak (11.5 miles, 4,300 ft gain) we managed to get out the door almost on time. Unfortunately we didn’t check the local news so we had no idea that we were headed up the route of the “King of the Mountain” stage of the Amgen Bicycle Tour. Apparently amateurs like to ride the route earlier in the day so the road up to the trailhead was crowded with cyclists weaving up the hill. So in the end, we had a late start as usual.

The hike starts with a 3.5 mile climb up Icehouse Canyon, one we were familiar with from our first solo backpacking trip 2 years ago. That trip the climb seemed never ending, but this time our packs were slightly lighter, we were better conditioned, and it wasn’t as hot.  We quickly reached the saddle and headed another 2 miles toward Cucamonga Peak. 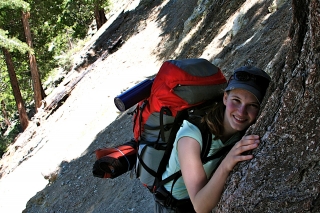 Katharine taking a break on the steep climb – July 2010

We tried to count the switch backs to the top and debated whether some counted or not depending on their angle or length.  When we reached the peak we had it all to ourselves so we had a snack and took pictures of the sun bleached trees. 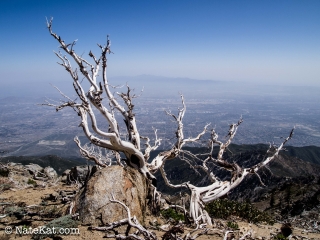 As you can see we were in good spirits.  Usually if there isn’t pictures of us at the top it’s because it was too crowded or we were too exhausted. 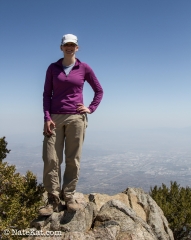 To the west we could see 2 of 5 peaks we bagged during our backpacking trip; Bighorn and Ontario Peak.  The saddle between the mountains was just above our campsite, Kelly Camp.  Mount Baldy’s bowl can be seen behind the mountains.

We headed back down through Icehouse Canyon at a pretty brisk pace. 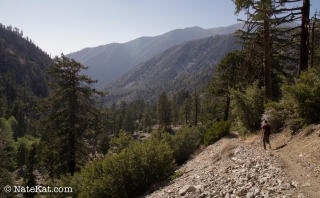 By the time we got back to the car, the Amgen Tour fans had left and only the race banners remained. We were relieved to drive down the empty mountain road!