This hike was mainly a training and conditioning hike to prepare for Mt. Whitney later in the summer.  Although the mileage and elevation weren’t as severe as Mt. Wilson, the altitude played a larger role in our endurance.  Mt. Wilson was a painful and tiring hike, but was at the very start of our serious hiking training season.  Since Wilson we had hiked 41 miles, so it was definitely starting to pay off. The trail up Baden-Powell was consistently uphill with switchback after switchback, but it wasn’t too steep so we were able to keep a decent pace. 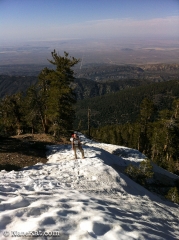 We did run into some large snow drifts on the north side near the top, which we easily traversed using our micro spikes.  It was clear and sunny at the 9,407′ peak. 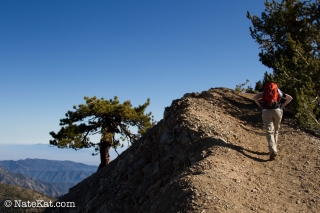 Near the summit we passed the “Wally” Waldron Tree, a limber pine that is believed to be over 1500 years old. 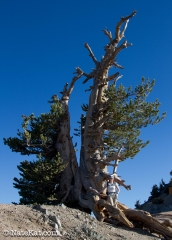 On the way down the 2,800 foot climb we tried to keep a brisk 3 mph pace down the switchbacks, which felt more like trail running.  We finished the hike in 5 hours without feeling too tired, but we were definitely hungry. The hike gave a good sense of accomplishment and it was the first time we could tell all the training was paying off. 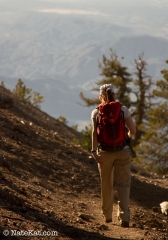