You are currently browsing the daily archive for May 16, 2012.

Everyone who has been to Bryce Canyon has always told us “You have to go there, it’s incredible”. And on our trip we learned they are right! You don’t really need more than a couple days to get a feel for the whole park, but it really is a unique place.

After a long drive from LA (with a short stop in Mesquite, NV to get a little sleep), we made it to Bryce and first claimed a campsite. Although we were surprised to find out that it was a national park fee-free week, the campgrounds were not too crowded so we got a nice site at our first-choice campground. Then we put our hiking shorts on, grabbed all our camera gear, and headed to Sunset point for a first look at the Hoodoos and Bryce Amphitheater.

Bryce Canyon really seems to come out of nowhere, you can’t see anything from the road… instead you have to get right up to the rim to see it. We admired the views from Sunset Point, then walked to Sunrise Point along the rim and headed down into the canyon towards Queen’s Garden. 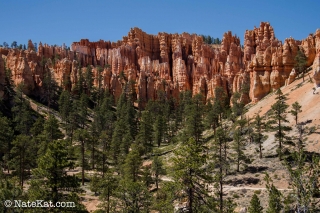 We did a 6 mile figure-8 loop which gave us some great views amongst the hoodoos.  The 6 mile hike took most of the day since we were still getting used to hiking above 8,000 feet so the “photo stops” were a welcomed as we needed to catch our breath.

Portions of the hiking trail are also shared with a horse trail.  For those of you not interested in hiking for 6 hours this could be a comfortable option.  As the sun started to set behind the canyon walls we headed up the steep switch backs to the rim of the canyon. 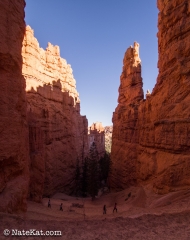 Because the Bryce Amphitheater faces east sunset isn’t the best time to photograph the hoodoos.  You can see the dark shadows creeping across Thor’s Hammer, a popular photographed hoodoo.

We then went to Bryce Point to get a better view of the entire amphitheater from above and look for potential sunrise locations. Even though the lighting wasn’t ideal, the view point was crowded with visitors trying to get a last glimpse of the unusual landscape.

We decided to wake up early and beat the crowds to Bryce Point for sunrise.  Even Katharine got up before sunrise, which is a first for her on a camping trip.  There were a couple other photographers with their tripods, but most sane people aren’t willing to stand in the cold and dark setting up their tripods by headlamp.

Once the sun was above the horizon and the hoodoos lost the dramatic lighting we left the now crowded view point.  We went back to sunrise point and hiked a couple switch backs down into the canyon where we found several other photographers camped out with tripods taking photos of the glowing hoodoos. 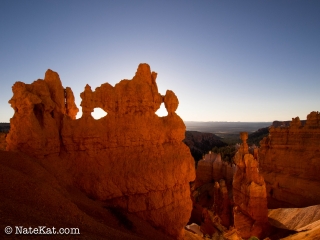 It’s always comforting when you go to a location and there are 5 other photographers with $5k+ setups; it let’s you know you’re probably on the right track.  When you take the chance and setup your gear alone and then 30 minutes later those 5 photographers show up and have to rethink their location because you’re standing in their spot, it’s priceless.

After sunrise was over, we had breakfast at our campsite and drove to the southern end of the park to check out the bristlecone pine trees which are the oldest species in the world!  The oldest tree is believed to be in the White Mountains of CA (almost 5000 years old), but the exact location is not publicized. In comparison, the oldest bristlecone pine tree at Bryce is 1,600 years young, and in our opinion looked pretty dead. (Apparently it is still growing inside, protected by the dead bark around it.) 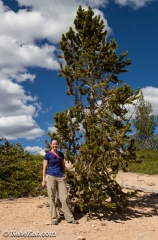 On our way back to our camp we spotted two pronghorn antelope grazing in an open field.  They were obviously rather accustomed to humans and let us within a 100 feet, but were wary if we got any closer. 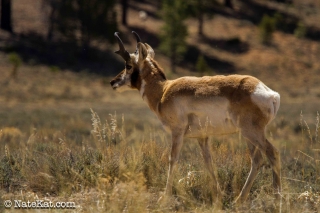 We ended our time in Bryce by driving back up the park road stopping at most of the view points and enjoying the variety of landscapes. With this trip in mind Katharine bought a new wide angle lens, which paid off with the vast landscapes.

Bryce Canyon certainly did not disappoint; we heard several groups exclaim that they thought it was more impressive than the Grand Canyon. We aren’t sure about that, but it is definitely unique and amazing to see. Next time we’d like to visit in the winter when snow gives a little more contrast to the rock formations.