You are currently browsing the daily archive for February 9, 2012.

One of our goals for 2012 is to summit Mt. Whitney, so to prepare we are starting to hike more regularly. The first hike of the year we tried was Mt. Islip in the Angeles NF. Apparently taking the fall off made us a little rusty on preparation… It was a warm day in LA but at an elevation of 7000 ft at the trailhead, it was cold and very windy. Right when we got there another group pulled up, got out of the car, but decided to just skip it and head home because it was too cold.

We decided to give it a shot even though we only had our fleeces, but as we started up the trail we were surprised to see snow. I hadn’t thought there would be any left from a November storm, but the trail was pretty shaded and the high elevation must have kept the temperatures low enough.

The snow was hard packed and crusted over with ice 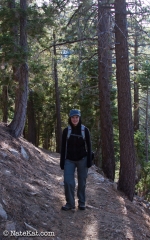 This small sunny area was more what we were expecting

We didn’t think to bring our spikes/crampons so we carefully shuffled over the icy parts. Some were along rather steep drop offs and by the time we got about three quarters up the mountain to Little Jimmy camp, we had run out of time and the snow/ice was only getting worse. So we decided to call it a day and turn back. The hike down made us a little nervous, but we got back to the car safely. Now we know to always bring the spikes just in case! 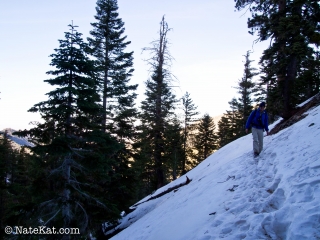 And don’t think the irony of the mountain being called ‘Islip’ was lost on us as we slipped over the snow and ice.