Over two years ago Katharine planned an epic camping trip with co-workers at Jackson Flat in the Angeles Nat’l Forest.  The trip included campfire stories, an insane hike, a lake full of dead fish, lots of food, and memories for a life time. 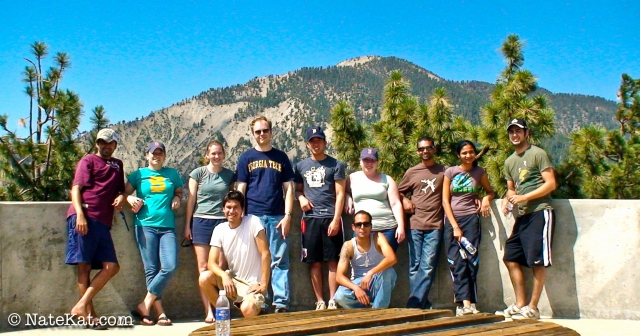 After many requests to plan another trip Katharine along with a few other colleagues planned a 2 day 2 night trip in the Sequoia National Forest.  Quaking Aspens was the actual campground, which had large group campsites with fire rings and plenty of hiking and fishing nearby.

We all left work on Friday at various times and drove 4 hours to Quaking Aspens.  We took our Outback fully loaded with all our car camping supplies plus a little extra in case someone forgot something.  We had also been monitoring the weather, which was predicting low temperatures around freezing at night.  There was 22 people, 8 who had never camped before, and 8 who had camped once before on the Jackson Flat Trip.  We were obviously hoping for better weather but everyone was excited and it had been planned for so long we decided to tough it out.

As we started climbing the mountain’s winding roads the sun started to set, which wasn’t good since we were the second car to leave work. Soon it became dark and we knew it was going to be interesting setting up tents in the dark, especially a lot of new tents.  Then to our surprise the headlights sweeped across a white patch on the side of the road.  “Is that…snow?!” Sure enough it was and we checked the car thermometer which read 30 degrees.  The situation just got 10 times worse, we had another 1,000′ to climb and we were already seeing patches of snow.  We finally pulled in to the campground to find it under about 4″ of snow.  We got out and found our campsite as everyone started to arrive.  It was 9 pm, freezing, and we had to setup 13 tents over the next hour, on the snow! 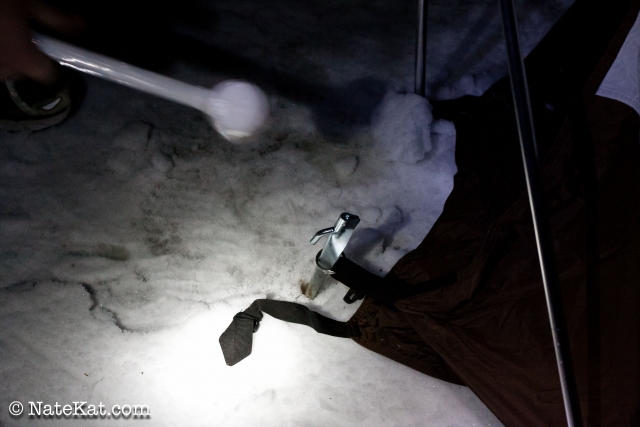 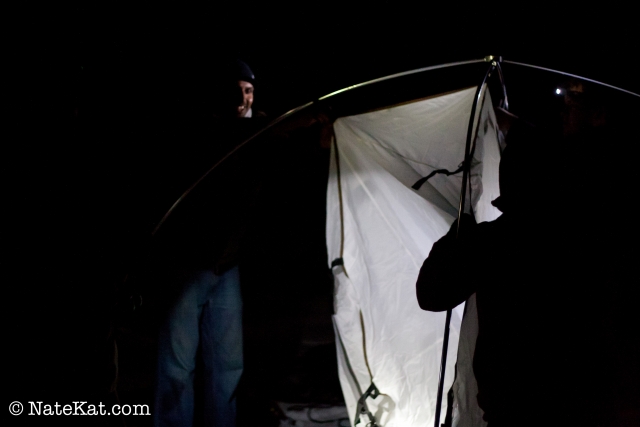 As the tent city was being assembled we also started a fire as people took shifts warming up then unloading gear.  The look on everyone’s face when they arrived was priceless, it said it all, “are we really doing this?”

The worst tent to sent up was a Cabelas tent loaned to Brian from Ken.  It took 5 engineers 30 minutes to set it up and it never really looked quite right. 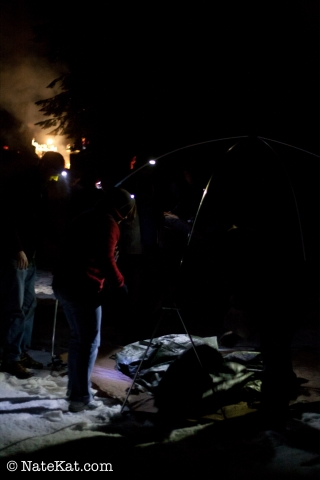 Casual Friday’s attire didn’t seem to hold up the best against the night cold. 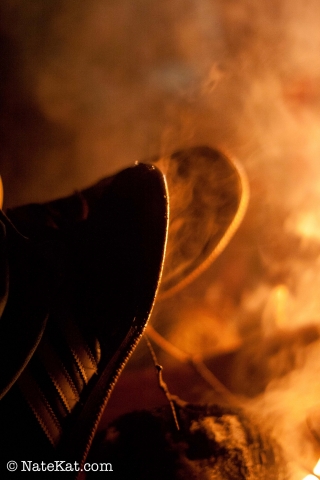 Steam rising off wet tennis shoes near the fire

Cyrus brought a hatchet to chop firewood which was very useful, entertaining and sometimes scary. 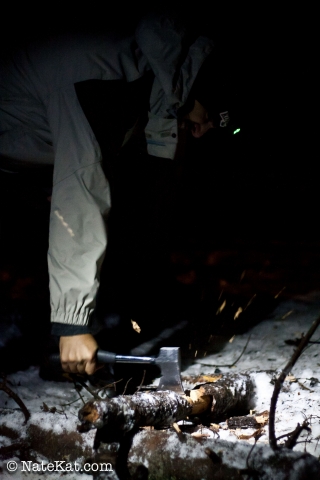 The alcohol gave us a false warmth in our bellies that we all enjoyed. 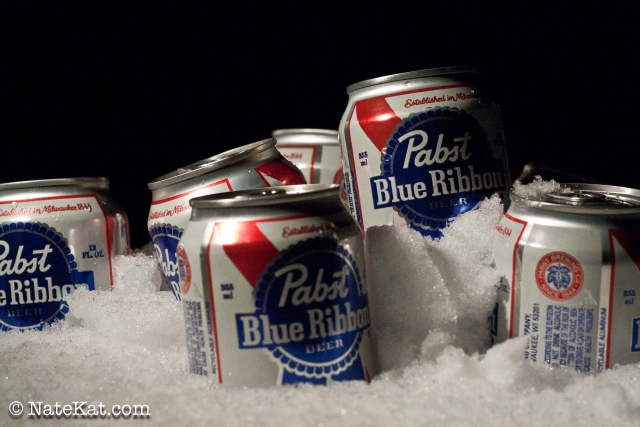 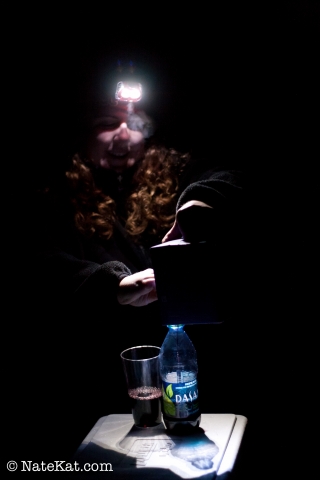 Box Wine Being Transferred to a Plastic Bottle…Classy

There was also two dogs on the trip- Dexter & Lola.  This was the also the dogs’ first time in the snow and camping. 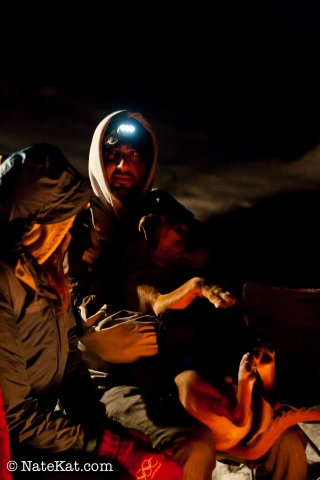 Not Sure Who’s Keeping Who Warm

Everyone woke up to a winter wonderland…well a freezing wonderland at least.  The tents were covered in frost and starting a fire was not an easy task. 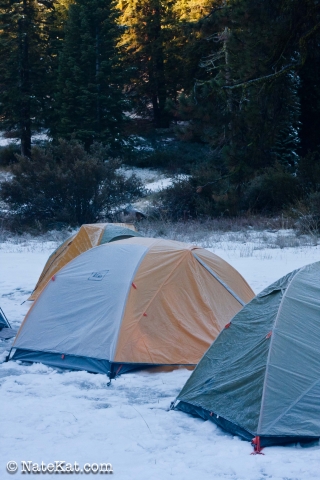 Everyone chipped in to make breakfast whether it was warming up propane canisters, scrambling eggs, or cooking sausage. 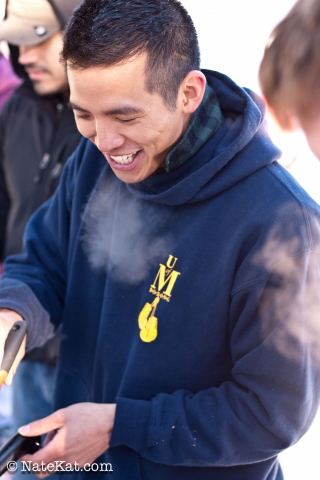 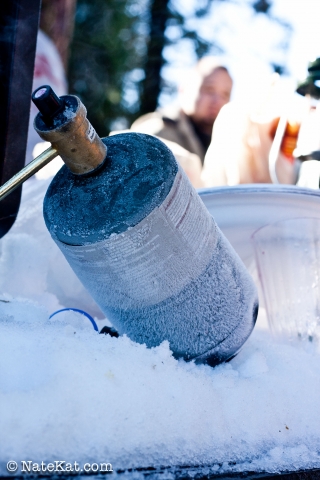 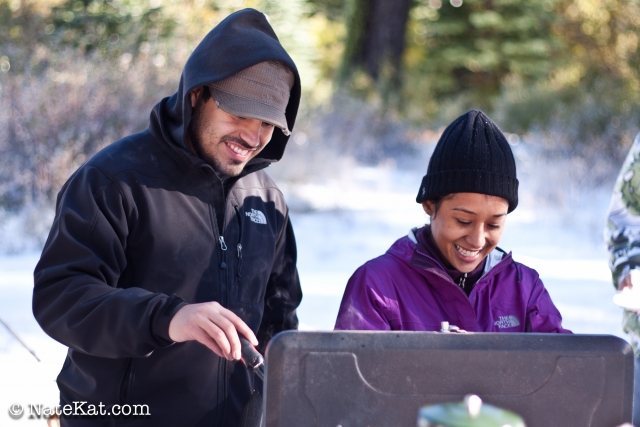 The dog’s also had a lot of fun playing in the snow and yes that is Lola’s lion Halloween costume being used as a jacket. 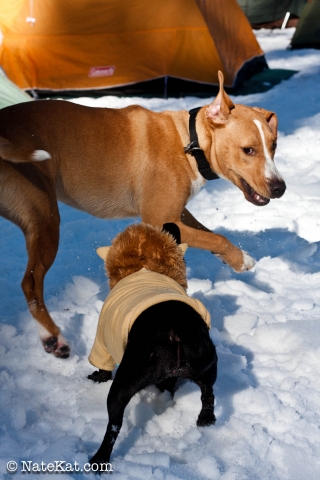 We decided to split up for the day into 3 groups: some were headed fishing, others wanted to hike to Needles Lookout, and the third group was headed to see a giant sequioa grove. Katharine and I decided to join the hike to Needles Lookout since we just saw some sequoias a month earlier.  So our group took three cars and began the journey up the mountain on a dirt road to the trailhead.  Unfortunately, the shaded areas of the road were icy, the sunny spots were muddy, and the whole road was full of ruts and potholes.  We soon realized the AWD on the Outback paid off but it became difficult for the other cars.  The Audi also had traction but Cyrus didn’t want to risk damaging his car driving through brush and eroded roads. 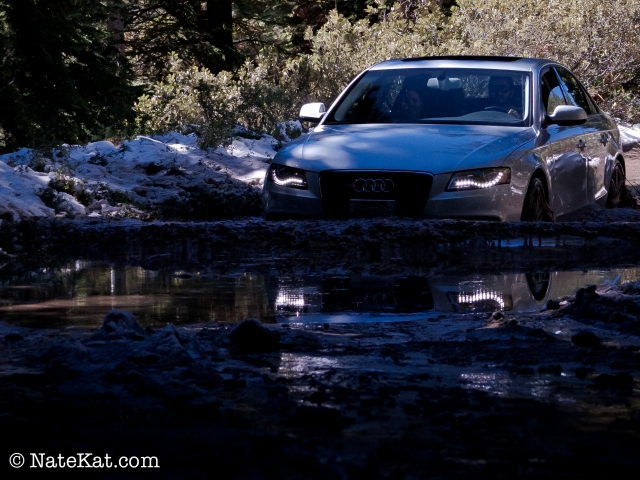 Cyrus Making His Way Through Some Muddy Water 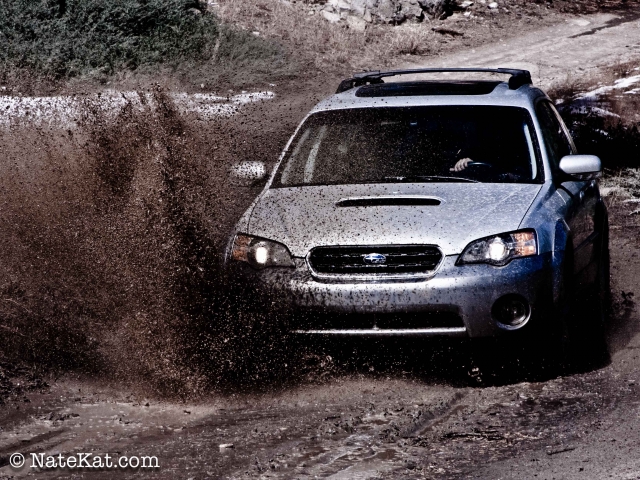 Having Fun Getting the Car Dirty

We gave up on the hike to Needles Lookout and instead joined up with some of the others on Dome Rock, which provided an excellent view and a great place to have lunch.  The sun was out and we almost forgot how cold it was the night before. 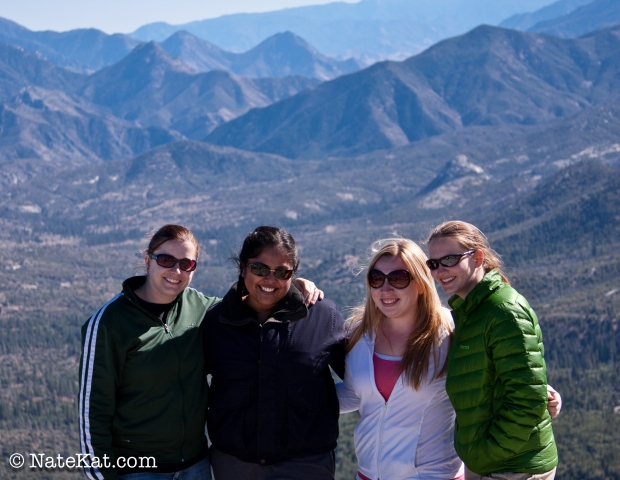 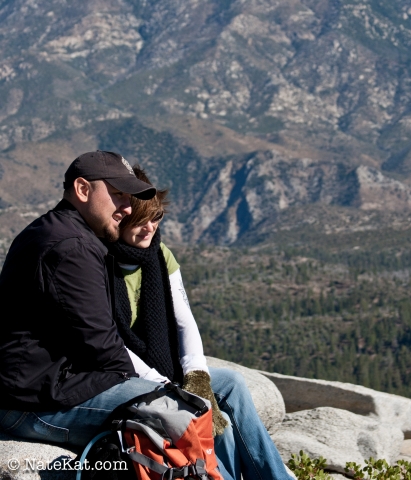 When we got back to camp the snow had melted and created a lot of mud throughout our camp so everyone worked together to pickup tents and relocate them in the dry grass for the next night.  After a long day of driving, hiking, and gathering wood, everyone was tired and relaxed drinking beer around the fire. 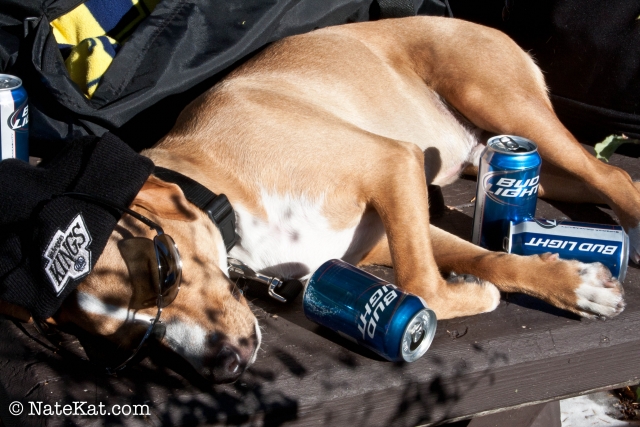 Even Dexter Was Pretty Tired

It was another cold night probably just above freezing as opposed to the previous night of 25 degrees.  We broke out the marshmallows and told stories to keep our minds off the cold. 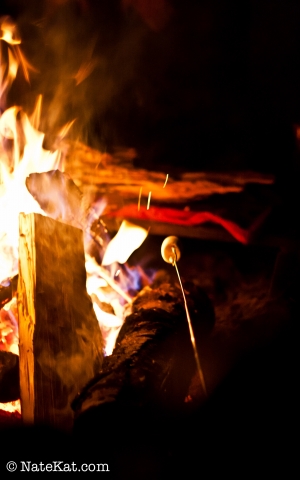 The next morning we had a quick breakfast and packed up camp.  This was another trip to remember for sure and for all of those who’s first time camping…it usually isn’t this uncomfortable!  Also, Katharine and I realized that we had gone camping 4 times in 2011 and 3 of them involved snow.  Hopefully 2012 is full of warm and dry camping trips.  Thanks again for all of those who toughed it out- it was fun and always memorable.

Next time hopefully Trail of 100 Giants won’t be closed and it will be warm enough to try out the natural water slide!