We spent day 10 driving almost 7 hours from Seward to our cabin outside of Denali National Park. 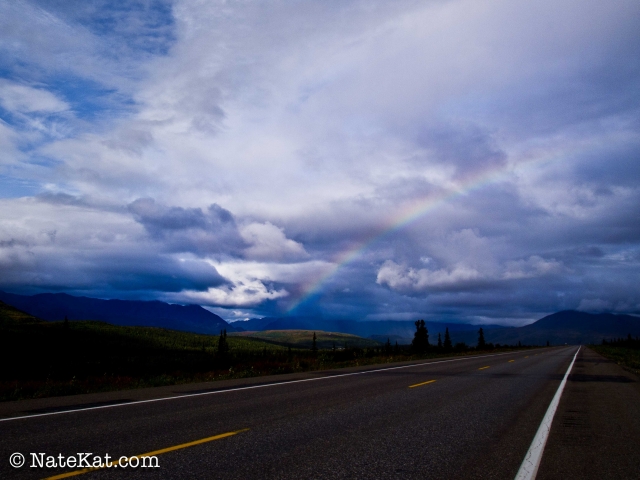 Rainbow spotted on the way to Denali

The next morning we had to wake up early for our bus tour which is the only way to travel in the park.

Denali NP has a unique bus system where you ride on school buses on the only road through the park. At any point you can choose to get off and hike around, then just go back to the road and flag down a bus to get back on.  For our first day we booked tickets to Wonder Lake, nearly the entire length of the park road, which takes about 11 hours round trip if you stick with the same bus the whole day. Given how many hours you simply spend on the bus, we were glad to have long days so that we still had time to get off and explore on our own a bit.

While riding on the bus you are encouraged to point out wildlife (and to shout ‘STOP’ when you see something so that the driver can help show others), but it takes a few animal sightings for people to get the confidence to yell at the driver. Our first animal sighting was a grizzly bear grazing on berries.

Since the bus system is the only way to get through the park, there are hardly any hiking trails, and back-country camping is strictly controlled, Denali is kept as a wilderness area and animals aren’t used to humans, so they are usually seen far away from the road (which is different than most National Parks where you might see moose grazing right by the side of the road).  After a while the driver also encourages people to yell stop for any good photo opportunities like this landscape.

The bushes and tundra were just starting to turn colors for the fall which made for amazing photos. 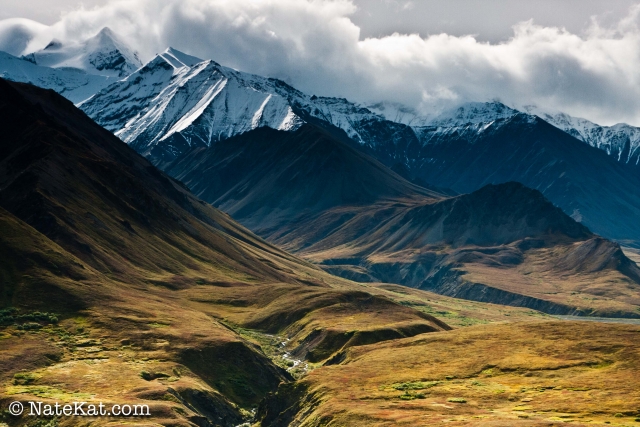 View from Eielson Visitor Center of the Alaska Range

After we passed the Eielson Visitor Center we got off the bus for a hike through the tundra and blueberry patches.  Katharine spent most of the time picking and enjoying the unlimited supply of ripe berries while Nathan kept a paranoid watch for grizzly bears. 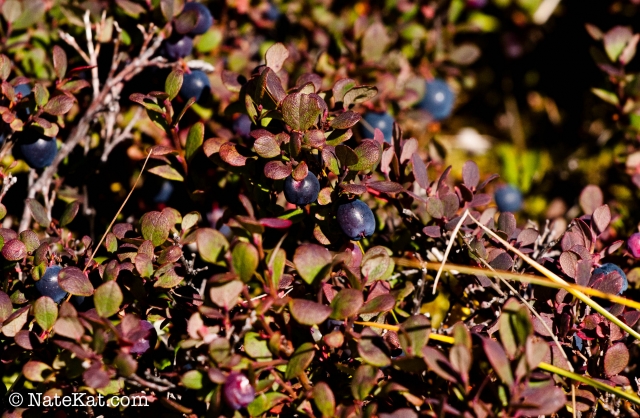 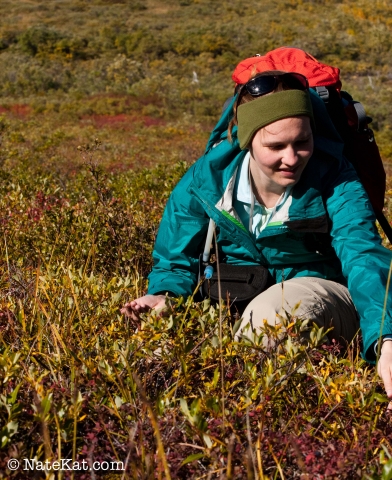 After a while of walking through the thick tundra, we headed down to the stream bed for some easier terrain. 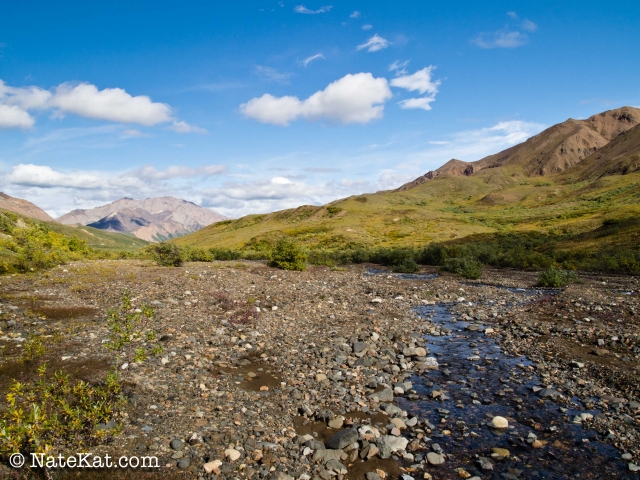 Nathan’s fears quickly turned from grizzly bears to spooking moose in the willows.  As we walked we could see moose tracks all around us and the willows (moose food) became thicker and thicker so that we could often only see 100 feet ahead of us.  At one point we could see the park road ahead about half a mile away and a bus was stopped.  A stopped bus could only mean one thing…ANIMALS! The bus was up against a steep hill so we knew they were looking our way.  We paused trying to figure out what they could be looking at then suddenly a fox or a small wolf ran past us just on the other side of the stream bed.  Now our minds were racing trying to remember all the animal safety rules…grizzly bear you stand your ground…moose you run away…pack of wolves…they never said anything about stumbling on wolves! Luckily the wolf/fox had run by quickly and was soon far away. But multiple buses were still stopped – meaning they were looking at something else. We decided to climb out of the willows to higher ground to get a better view.  We reached the hill opposing the buses with a wide valley between us and sure enough we spotted grizzly bears! 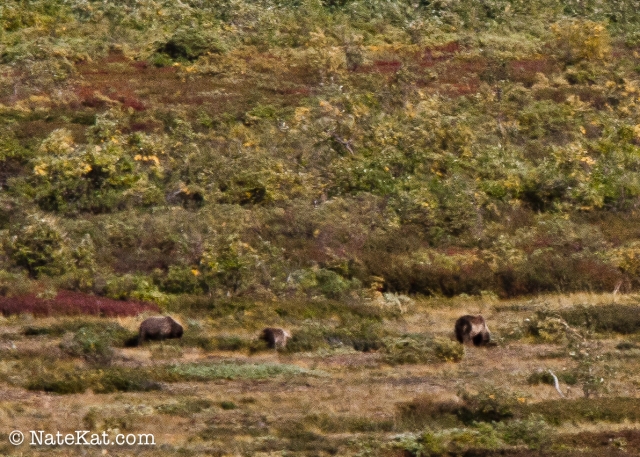 They were still quite far away, probably about a quarter of a mile, but a mother and her full grown cubs weren’t something we wanted to take a chance with. We sat and ate berries as we watched them casually walk into the hills, and then we headed down into the valley towards the road.  Denali has few to no official hiking trails because by allowing everyone to hike in random areas they preserve the overall terrain.  Sometimes it’s fun to explore the wilderness on your own but other times you wish you had a nice trail. 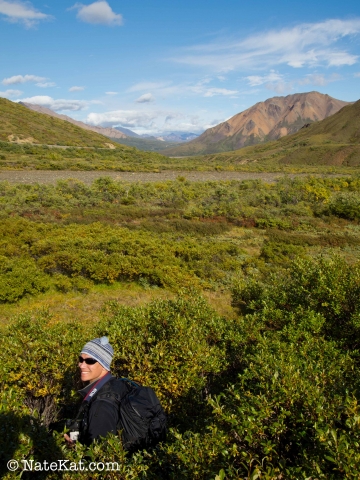 Thick willows that sometimes are above your head

Starting in the afternoon, “The Mountain”, Mt. McKinley aka Denali, began to show through the clouds barely.  It is actually uncommon to see the mountain and extremely rare to see it from top to bottom without any cloud cover. As we headed back to the road after our hike, we looked back and could see the clouds had fully cleared around The Mountain. Sadly we were already headed back and past the best view points, but we still got a couple nice shots.

By the end of the day we had spent about 14 hours in the park and couldn’t wait to go back the next day, which would also be our last “fun” day in Alaska.  We saw caribou, 5 grizzly bears, moose, arctic ground squirrels, pika, dall sheep, wolves, possibly a fox, and The Mountain. Only in Denali!