Our second day in Valdez started with another early morning, and even though it was cloudy and cold, we were excited for our Kayaking trip with Pangaea Adventures.  We met up with our guide, put our gear in dry bags, and were outfitted with life jackets, boots, and kayak skirts.  We decided this trip wasn’t the best for our expensive camera equipment so we just took our waterproof point and shoot.  We were paired up with another couple and got on the first boat headed to the Columbia Glacier.  After a two hour boat ride we landed on the terminal morraine and unloaded our kayaks.  After a brief lesson on getting in and out of the kayaks and a stern warning that tipping your kayak wasn’t the best idea, we started paddling out to the icebergs!

Getting in was a challenge, can’t imagine tipping over and trying to climb back in

Columbia Glacier was actually ~9 miles in the distance and is currently in the catastrophic retreat phase of its life cycle. Although it is not well understood, it is believed to be a natural progression (not caused by global warming) and is the reason there are so many icebergs scattered in Heather Bay.

The icebergs we were paddling through ranged in size from small chunks the size of basketballs to large ones that were probably at least 30 feet tall, but it was hard to tell without anything to compare them to.  Although it would be fun to kayak up to one of the large ones or even climb on them it is actually quite dangerous and unstable.  As we saw the previous day, an iceberg can spontaneously roll and since most of the actual volume is hidden underwater it is hard to judge the true size. The rule of thumb is to keep a distance that is twice the height of the visible ice.

This large blue one can be seen in the foreground of the second photo, we estimated at least 30 feet tall 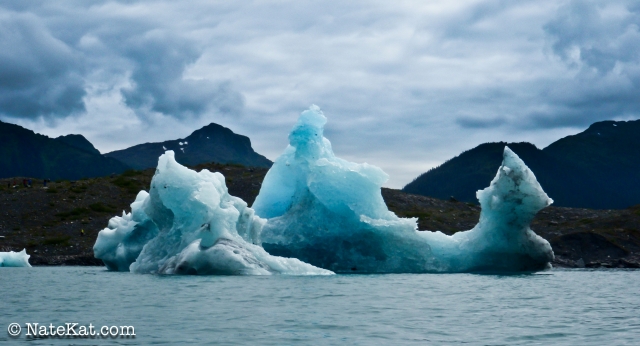 Size of a small house

At first we were disappointed to stay so far away given their advertisement photos but soon after we started paddling, we heard a large crashing sound as we watched a house-size iceberg roll over.  Throughout the day we continued to hear ice cracking and splashing into the water from icebergs nearby and miles away.  At one point we had to navigate through a dense field of icebergs, and when we looked back one of the large icebergs had split in half and tumbled into the ocean.

The iceberg that split in half after we paddled by

On our way back to the boat we took a different route and paddled through an area only accessible at high tide. It was a completely different landscape, feeling more like a freshwater marsh than the ocean.  But as we paddled through the still water we could see foot-long jelly fish just below the surface.

As we came out of the calm shallow water we were greeted by a few curious harbor seals.  They liked to pop their heads up near our kayak, but once we grabbed the camera they vanished.  We also tried to stalk a couple otters, but like the seals they stayed at a safe distance. 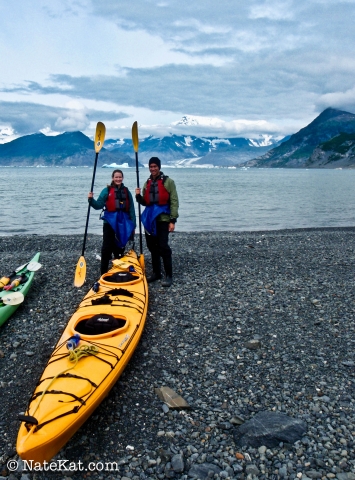 It was an awesome experience, and a special thanks to Kim & Cory and all of our work friends whose gifts went towards this kayaking tour.