On July 4th we were dying to get out and do something besides wedding planning so we consulted our guide to Los Angeles County hikes and picked one on Katharine’s to do list.  The hike was Serrano Canyon and Big Sycamore Canyon Loop in the Santa Monica Mountains, which is a 9.8 mile loop with 1,250′ of elevation gain.  The hike started in a campground which was over run with families and crowded barbecues but after a mile hike on a dirt road we turned down a narrow path and only saw other hikers maybe once an hour. 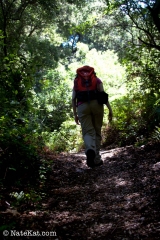 In the beginning the trail was shaded from the hot sun, but with all the rain this year the brush had began to encroach on the trail and you felt more like trail blazing then hiking sometimes. 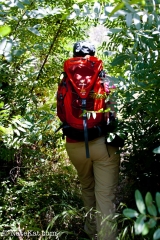 But of course when you hike in thick brush near creeks around here, you have to be on the lookout for poison oak. There was an insane amount of it on this trail-  it was everywhere lining the trails on either side and clinging on to other bushes reaching as high as your shoulders.  I now use a sunscreen that has a built in barrier to protect against the rash-inducing oils.

But the canyon had more than poison oak – we also spotted many flowers that provided great practice for Katharine to use her new camera! (More on the new camera later) 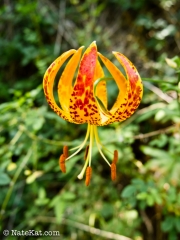 We finally climbed out of the lush poison oak filled canyon to the top of a hill and a sea of dried grass. 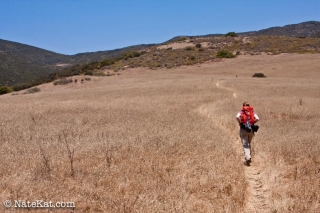 We traded poison oak for hot exposure to the sun.  At this point we had covered about 5 miles (halfway) and almost all of our elevation gain but we had drank at least 2 liters of water each.  We headed around the loop and back to the dirt road where at 8 of 9.8 miles I ran out of water but we had reached the dirt road that was shaded and easy to walk.

We also ran into a small group of ducks resting in the shade. 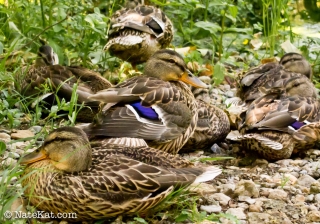 All in all it was nice to get out but it was just too hot to really enjoy the hike. We’ve decided from now on not to hike the Santa Monica Mountains during the summer months even if the guidebook claims there is plenty of shade!