You are currently browsing the daily archive for May 15, 2011.

All week it had been calling for rain, but we had escaped up until our fifth night. Finally, the weather report came true and when we went to sleep in the tent, we could hear the rain tapping on the tent.  Around midnight, in my sleep, I brushed my arm across the top of my sleeping bag…it was soaked.  I immediately woke up and then woke up Katharine.  We scrambled for our head lamps to try to asses the damage.  My sleeping bag was pretty wet as was the floor of the tent where I was sleeping.  The water was dripping through a vent that is near the top of the door, it purpose is to let the humidity out to avoid condensation, not so funny at the moment.  We managed to re-position the vent so the water would run off, then soaked up the remaining water with dirty clothes.  Then we went back to sleep, just another night camping.  We then woke up to a funny sound, it wasn’t rain but we had heard it before (Yosemite).  It was still dark out and my eyes were still a little blurry as I sat up looking at the tent walls.  Then I heard the sound again like someone brushing the rain fly, and I realized it was snow!  The snow would build up on the tent then slide down in large sheets.  I grabbed my camera and went outside to grab some photos. 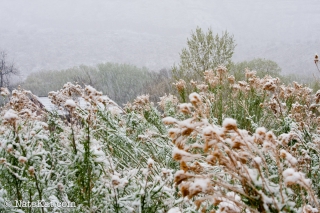 The clouds were low in the sky blocking the surrounding mountains and the large flakes were gathering fast. 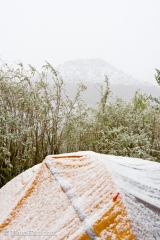 The snow was building up on our three season tent, so I cleared the rain fly and cleared the snow from the base of the tent before it soaked our gear.  After lying in wait for about an hour for the snow to stop I went out again and took some photos of the mountains near our camp.  Keep in mind these were the same mountains seen in the first photo of the post from the previous day. 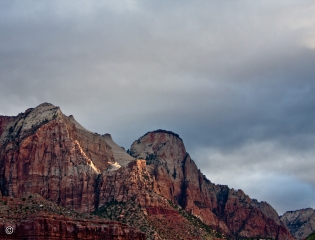 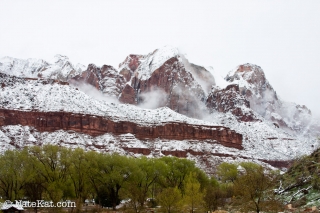 Being a photographer and an adventurer it’s always funny because when everyone else is running around packing their cars, you’re there setting up your tripod snapping photos.  A Colorado couple camping nearby who were pretty hardcore by our standards, because two days earlier they were literally splitting their own firewood, were packing up.  I talked to one guy from Montana who the day before was free climbing cliffs, and he was also leaving.  We thought about it an looked around at the deserted campground and decided today would be our last day.  We took the shuttle to far end of the canyon and walked around taking photos of the red rock covered with white powder. 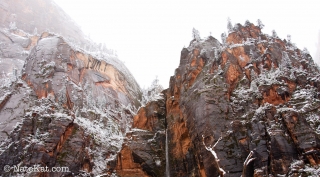 When the rain and snow stopped the animals came out of the woodwork.  The interesting thing was when the snow started up again they didn’t seem to mind. 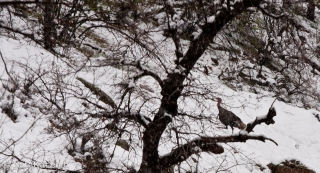 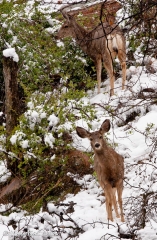 Then the snow started again blocking the view of the mountains, so we packed our things and headed up the road toward the East Rim Trail head where our trip began.  We took the road because it climbs up the mountains to a possible better view of the snow covered landscape, but then we came across something ten times better…

Not only was there a herd of them, but they were close to the road.  We stopped rolled down the window and took some video and photos.  I quickly attached my 70-200mm lens and shot some beautiful shots over Katharine and through the passenger window. 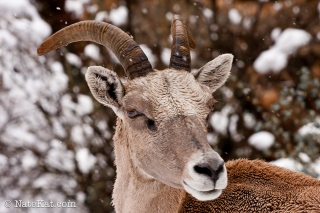 It has always been my goal to take a photo of a wild animal and have its head fill the frame of the photo.  What I didn’t realize is how close you would have to be even with a decent telephoto lens.  The female sheep kept a close eye on us as their young were eating grass near by. 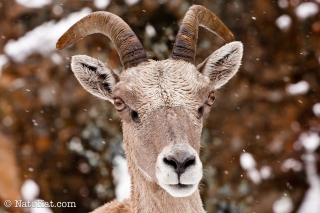 I couldn’t believe how close they were, finally I achieved my goal! To see the full effect, click on the photo to enlarge it and see the fine details (click the photo again to close).  I got a tiny glimpse into what wildlife photographers must do to capture the perfect shot.  I can’t imagine how close one has to be to a grizzly to get a similar shot, I hope it would include an 800 mm lens.

Even though they were so close it was hard to get the right background considering they are well camouflaged with the sandstone. 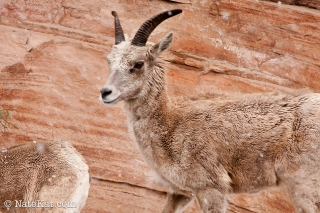 I didn’t even realize their wet fur texture until I was going through my photos.  I thought it added some character to the youngsters. 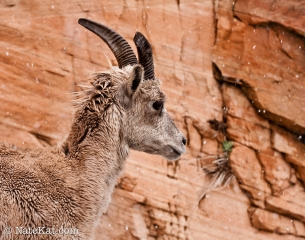 The young ones were definitely more skittish and would jump to small ledges 6 to 10 feet off the ground.  It was amazing to watch them jump from ledge to ledge. 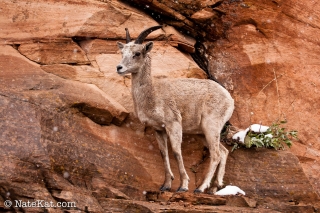 After a while they vanished into the cliffs but we left with the biggest smiles on our faces.  The weather wasn’t the best but that moment was unforgettable.  We then drove home, 8 hours, sharing stories about the week and how fun, scary, amazing, and memorable it was.