You are currently browsing the daily archive for May 10, 2011.

It was a pleasant morning but gray clouds had rolled in overnight giving a gloomy feeling to the canyon.  Today we were going to attempt Angel’s Landing, which is a day hike to the top of the 1,488 foot peak overlooking the canyon.  The rock formation gets its name from some early settlers that described the peak as so remote only an angel could land on it.  Of course this became a challenge for adventurers of the time, and in 1926 a trail was carved allowing hikers to climb the rock. Now it is the most famous hike in the park. Even though a trail has been developed, the last 1/2 mile is treacherous with steep cliffs on either side.  There are chains to hold on to in some areas, but the rocks can be slippery even when dry so extra caution is required.  Every description of the trail warns hikers of the sheer drop offs, so we were excited but a little hesitant as we headed out on the trail.

We started up the switch backs and kept our eyes fixed on the top wondering where is this trail headed? And how are we possibly going to make it to the top?  There were only a few people on trail since it was still still pretty early and the tour buses hadn’t started dropping off large groups yet.  We wanted to make it up and down the rock before large crowds of unprepared tourists made the narrow trail too crowded. 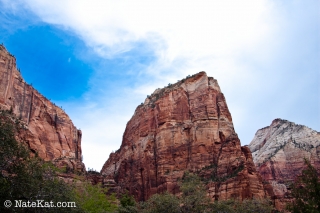 View of Angel’s Landing from below

We soon were behind the rock and made our way up Walter’s Wiggles which are 21 steep but short switch backs.

Katharine headed back down Walter’s Wiggles

Once we got to the top we looked across the spine that led to Angel’s Landing.  We could spot people like ants crawling up the rocks. 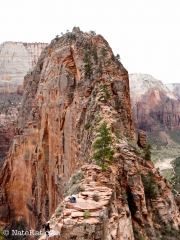 The spine of Angel’s Landing

As we started making our way to the spine, we ran into an old volunteer ranger who was coming down. We asked him for any advice and he was very supportive and encouraging. Turns out it’s his favorite hike in the park, and he’s done it 41 times!! We figured if he could do it, so could we and so we headed toward the peak with confidence. 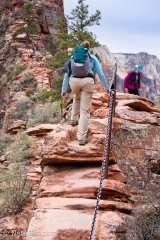 It started off fairly easy and there seemed to be a ledge not too far from the trail that might catch you if you fell.  But soon the ledge became shorter and we found ourselves climbing up rock faces.  We stayed close together letting others pass if needed.  Katharine didn’t like the feel of the swinging chains and chose to hold on to the rock instead. 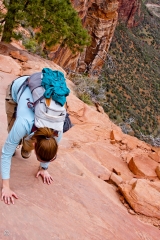 We became more comfortable with the insane cliff and just focused on the next step or link of chain.  We took turns in some areas letting people come down then we would head up.  Everyone was calm and respectful of each other giving each other time and space to make the climb. 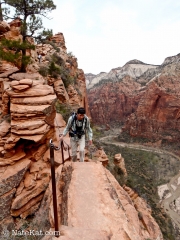 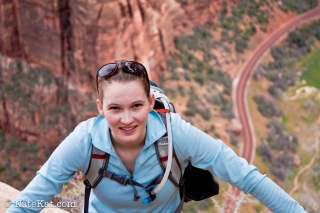 When we finally made it to the top 40 minutes later, we realized that there wasn’t really one part in particular that was the worst, nor was it as scary as we thought it might be, but it takes some mental strength to keep climbing for a full 0.5 mile. 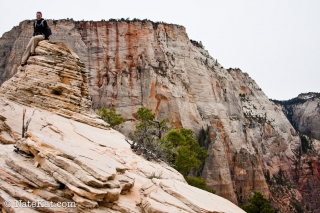 Katharine at the top

We managed to walk to the point and position ourselves across the ridge to have lunch.  The view was amazing but the sun remained behind the clouds and the wind started to pickup forcing us to add more layers. 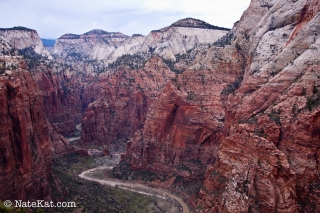 While eating lunch, chipmunks would run around us with no  fear of humans or the cliff edge.  They were begging for food and would climb in your lap if you would let them.  Battling chipmunks and wind on a thousand foot cliff made us both nervous so we took some photos and headed down before the weather turned any worse. 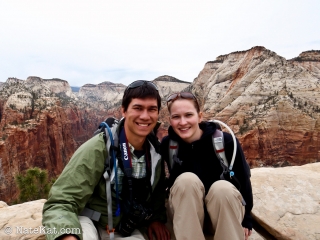 Heading back down the spine was a challenge, it was like a salmon swimming up stream…kind of.  People were now heading up the trail in large groups and not always respectfully waiting for others to pass.  The kids were the scariest because they had no fear of the edge and were rushing to get to the top.  Some parents were yelling at them to stay on the chain while others had given up trying to corral them.  There were also many people from different countries and at one point,  miscommunication caused two people to get temporarily trapped/stranded in a narrow part of the trail. 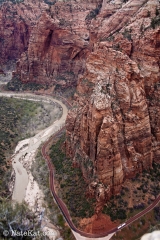 Climbing down while looking at the ground was daunting.  It was also hard and awkward to figure out the best climbing method, do you turn toward the rock or do you slide down on your butt?  At one point I decided to video tape Katharine climbing down but then looked behind me to find a group waiting so I scurried ahead with the camera recording in one hand.  I became more comfortable climbing with one hand while filming with the other.  I haven’t had a chance to look at the video, but I hope it captures the feeling of being on the trail.

We made it off the treacherous section just as it started to sprinkle.  We couldn’t imagine finishing that section in the rain with all the crowds! We put on our rain jackets and headed down the switchbacks with a feeling of accomplishment.  On our way down we ran into another couple who were finishing a backpacking trip on the West Rim Trail (we did the East Rim).  This wouldn’t be so impressive except that they were backpacking with their 2 year old daughter! We can’t imagine the challenge of backpacking with a small child… we’re struggling to reduce our pack weights as it is!

When we reached the canyon floor, we headed to the famous Narrows which is normally open for hiking but was closed with the fast moving Virgin River.  We hiked a mile in on the paved trail that was open and took some photos but didn’t stay too long since it wasn’t too impressive (compared to the photos you see from deep within the canyon). We’ll definitely be back when the Narrow are open though! 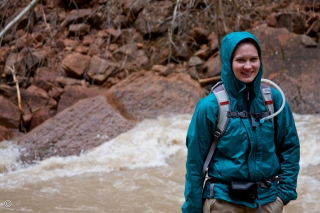 .Virgin River rushing through the canyon 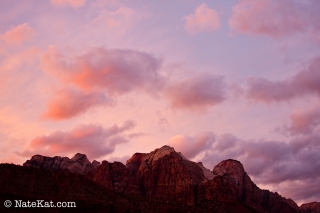 Sunset at Our Campsite