You are currently browsing the monthly archive for April 2011.

We woke up on our second day exhausted after tossing and turning through the night while trying to stay warm in our sleeping bags.  The temperature dropped well below freezing but luckily it wasn’t windy, snowy or rainy.  We were headed on a 10 mile hike to Deer Trap Mountain, a view point that would give us a spectacular first view of Zion Canyon.  We had already packed our bags the night before, so we were able to hit the trail before the sun hit our tent.  The muddy trail was frozen which made it easy to traverse but we knew the hike back would be difficult.

The first part of the trail was 1.7 miles climbing 500 feet to about 6,800 feet.  At this point the sun was over head and the mud was beginning to thaw.  As we were walking down the trail we looked down and saw paw prints.  There was also some shoe prints so we assumed it was a dog, but then thought, dogs weren’t allowed on the trail.  Then we started to think if it was a dog it would have claws but these prints didn’t have claw points at the end.  Then we realized it must be a mountain lion. 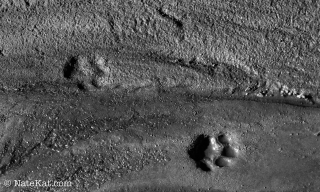 Honestly the prints were smaller than I expected (only about 2 inches across), so it probably was a young cat.  But when you’re miles from any other human, mountain lion tracks of any size are not a friendly sight.  We knew mountain lions might be in the area, but sightings are very rare. Still, we were uneasy as we hiked to Deer “Trap” Mountain.

The trail took us through many different habitats we hiked up muddy creeks, through pine groves, across sand, snow, and between burned out trees.  When hiking through the burned out forest we came across what I believe to be termite mounds.

Thought to be Termite Mounds

We also saw mud trails in the shape of branches which I believe are digested deadwood from the termites.  Of course these are just guesses and stories we made up while we walked but could be true.  We also passed a deer leg… yes just the leg and it still had some flesh on it.  We also came up with some creative stories about its demise, mainly involving the mountain lion.

Soon we could see the edge of Zion Canyon and we knew we were almost there. 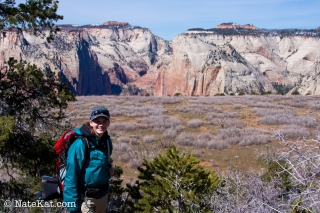 As we got closer to the canyon rim, the mountain lion tracks changed from a walk to a run.  We could tell the tracks were fresh since the fine sand would have buried them with a slight breeze. 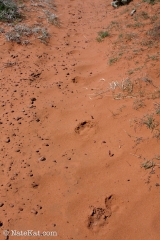 At one point the tracks went one way and the trail went the other way, and that was the last we saw of the tracks or any sign of the cat.

Although we didn’t forget about the possibility of encountering the animal, we were distracted by the incredible view.  We were standing over 2,000 feet above the canyon floor looking across at massive rust colored sandstone walls.  Most people’s first view of the park is from the canyon floor looking up from a car window.  Instead, since we approached the canyon from the backside, our first view was hard-earned and unobstructed, allowing us to see the entire expanse at once.

Along with the amazing views were treacherous trails that came within a couple feet of the shear cliff.  We hiked a long the rim for a half mile to a final point and sat on the rocks looking toward The Great White Throne and Angels Landing.  We had lunch and looked at the map trying to identify different rock formations. 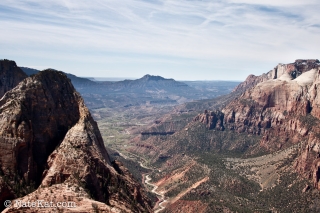 To Our Left: The Virgin River Exiting the Canyon 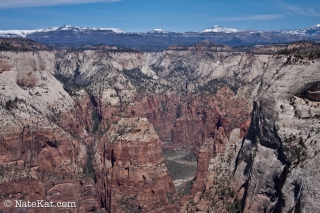 To Our Right: Angels Landing which we would hike 2 days later

Angels Landing is a rock formation in the middle of the canyon that doesn’t quite rise to the top rim but we’ll talk more about that on day 4.  After lunch we headed back to camp. 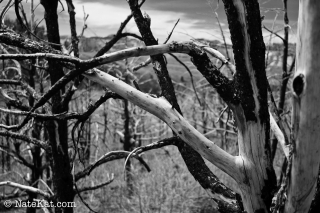 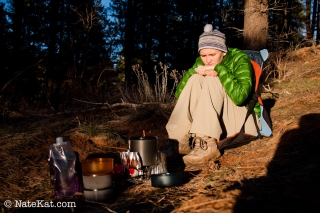 Waiting for the Water to Boil 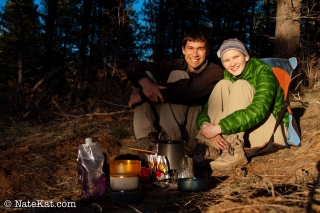 It’s actually amazing how good they taste although hiking 10 miles does help ones appetite.

After dinner we watched the sunset and I tried to capture the glowing sage brush in the valley near our tent. 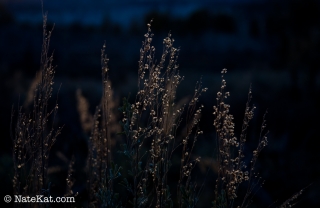 We then prepared for another night below freezing but were excited to hike down to the canyon floor on day 3.

On Saturday we drove 8 hours and arrived just outside Zion National Park.  We quickly setup our tent and began sorting and organizing our backpacking food and gear so we were ready to leave first thing in the morning.  We also unpacked our mess kit for dinner only to find a couple of the cups didn’t get washed and still had coffee residue…lesson learned.  As we were cooking our dinner the sun was setting and we looked up to see the mountain next to us glow as if it was on fire. 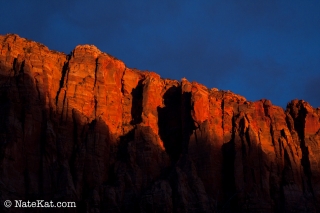 This was our first realization of the amazing beauty that Zion had to offer.

The next morning we quickly had breakfast and packed our backpacks, then drove just inside the park to pick up our permits.  I asked the ranger about the conditions on the East Rim and he replied the reports were a few days old but they expected snow on the ground and the looming gray clouds to also drop some snow throughout the day.  I just smiled, grabbed our permit and knew this trip was going to be interesting to say the least.  We then drove to Zion Adventure Company where we parked our car and took a shuttle to the East Rim trailhead.

The shuttle ride was spent talking to the guide about different areas of the park and staring out the windows in awe of the unusual rock formations.  We arrived at an empty trailhead and gray skies, in which the guide commented “well looks like you’re on your own today.” Putting on a 40 pound backpack in the morning doesn’t feel too bad, but knowing that you’ll have to carry it 6.5 miles up 1,600 feet of elevation over the next 5 hours is what makes you think twice.  Soon after we started on the trail we turned on our GPS and started the tracking.  We headed down the wide sandy trail side by side talking about work and school.  We find the first couple hours are spent venting about daily stresses, but we’re soon easily distracted by the incredible views.

The trail became a little muddy and we could tell there must have been a herd of mule deer ahead of us from the number of prints in the mud, but they stayed well ahead of us and out of sight.  After a couple of miles we reached a small stream crossing near the edge of a gorge.  The stream plummeted a few hundred feet off the shear cliff. 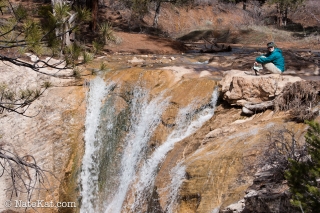 Katharine sitting on the edge of a waterfall reading the map

This was the first of many steep cliffs without any railings keeping you from peeking over the edge.  If you are afraid of heights, some of these trails are not for you. 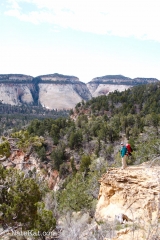 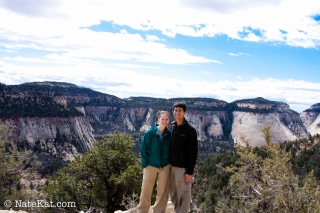 As you can see the gray clouds and the chance of rain and snow were quickly replaced by clear blue skies.

Around noon we reached higher elevation where snow was still present but luckily it didn’t live up to the ranger’s report of possibly a foot deep. 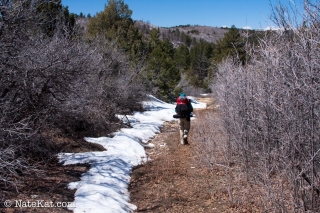 The sun was melting the snow making the trail muddy and slippery.  It makes it even more challenging sliding and balancing a fully loaded pack.  After a while we took lunch knowing we were close to Stave Spring and our future campsite. 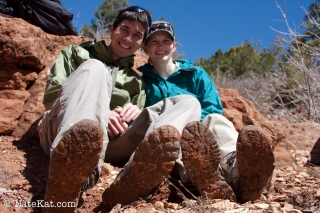 I think Katharine likes taking photos of me while I take photos in awkward positions. 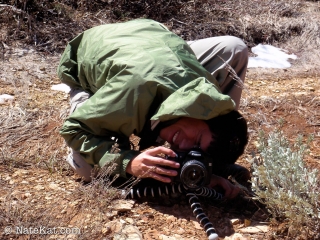 Whatever it takes to get the shot

After a little over four hours of hiking across sand, rocks, running streams, snow and mud we finally reached a grove of Ponderosa Pines that we would call home for the next two nights. 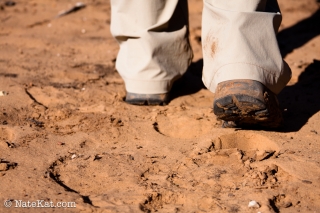 The orange sand was almost a fine dust on the trail

We spent the afternoon setting up camp, scouting the area, and taking an afternoon nap under the sun.  After dinner the sun was setting and the temperatures were dropping, but we snapped a few photos before we headed to bed. 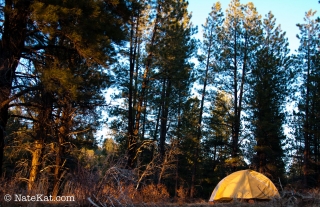 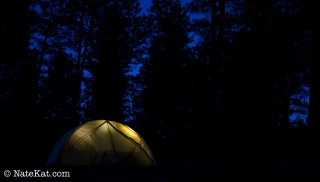 This was our first backpacking trip where we were the only people camping in the area.

Before we go through all our photos carefully and write a detailed trip report for our week in Zion National Park, we thought we’d post a few photos that represent each day. Consider it a ‘teaser’ of the posts to come!

For our first full day in the park, we backpacked up the backside of the East Rim of Zion canyon. 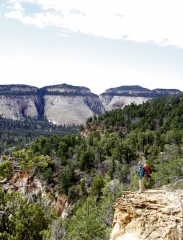 On Monday we did a long day hike from our backpack camp to Deertrap Mountain, getting our first view of the stunning main canyon. 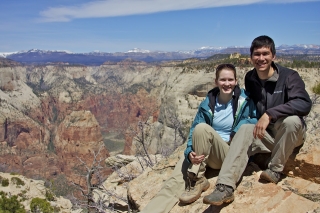 The next day we backpacked down and across Echo canyon and then descended 2000 feet into Zion canyon. 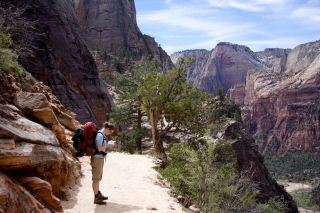 On Wednesday we hiked to the top of Angel’s Landing, traversing the backbone with shear cliffs on either side. 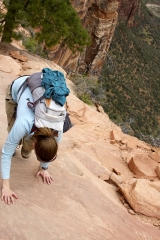 Thursday we explored Hidden Canyon in the rain. 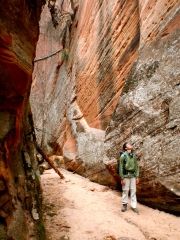 Friday morning we awoke to snow falling on our tent and the surrounding sandstone cliffs. 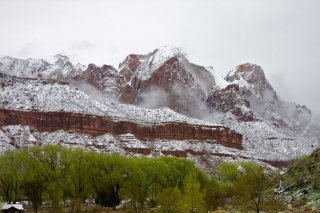 Just before leaving the park, we came across a small herd of bighorn sheep and Nathan got to practice his wildlife photography. 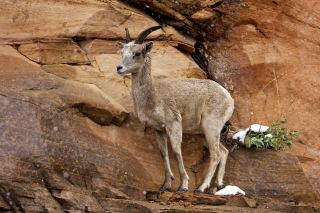 This is just a sampling of what we got to do in Zion. The weather didn’t fully cooperate – the Zion Narrows was closed due to high flow rate of the Virgin River – but we still had an amazing time and saw some spectacular scenery. It was a perfect break from work, school, and wedding planning. Now we just have to unpack all the wet gear, finish a take-home midterm, and catch up on some wedding items.

This weekend Katharine and I are headed to Zion National Park so in preparation two weeks ago we hiked to Devil’s Chair located just South of Palmdale.  Devil’s Punchbowl and Devil’s Chair sit right on a fault line which creates some unusual terrain.  Considering we are about to leave for Zion this morning I’ll make this entry quick.

We loaded our backpacks with 20 pounds of water which is light compared to the 30- 40 pounds we’ll be carrying this week.  The hike was a nice 7 mile round trip with a slight incline, and the trails were well maintained in most areas. 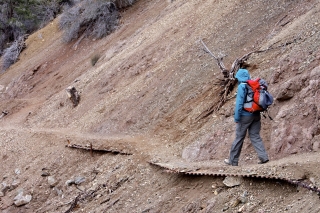 One surprise we did get was snow!  We did plan for rain so we had our rain jackets but we just got above snow level at the end of the trail and found ourselves in a snow storm.  The wind was blowing the snow horizontal and gave a hazy look to the landscape.

The real photos started when the sun started to peek out as it set and the rocks jetting out of the ground contrasted with the stormy skies. 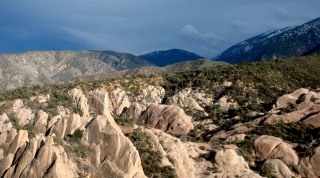 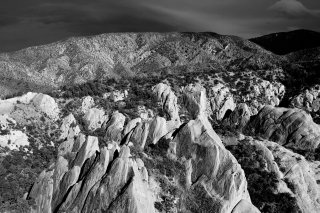 I took this photo but Katharine and her point and shoot get the credit for many of the landscape photos.  Her Olympus Tough camera is better dealing with the extreme snow and low light than my Canon.  I was constantly cleaning the lens from being pelted with snow flakes. 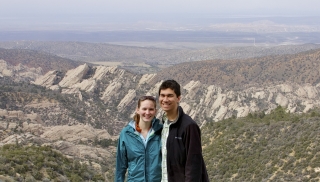 We are falling behind with our blog entries becasuse of our busy lives but hopefully when we get back from vacation we can catch up on wedding planning, photography, and of course the overwhelming amount of photos and stories from Zion.