You are currently browsing the daily archive for March 5, 2011.

It’s surprising with all the massive snow fall this year we hadn’t gone snowboarding yet.  But last week we made it a point to make it to “the snow.”  For those of you not from Southern California, “the snow” is what locals refer to as the mountains.  As the weekend approached the forecast was calling for more snow.  Katharine’s brother, Rick wasn’t hard to convince to join us on our day trip to Mountain High, which is only a couple hours away.  Saturday morning we woke up around 6:00 and checked the snow report, 2 feet of fresh powder!  We quickly gathered our gear picked up Rick and headed to the mountains.  Once we got off the freeway the police were making people put chains on their cars, luckily we had purchased chains for Yosemite and were now pros at putting them on.  As we climbed up the mountain the snow continued to increase covering Joshua Trees which was an uncommon sight for us.

We finally reached Mountain High to find the place surprisingly empty, but we figured since it was early in the morning more people would soon fill up the lifts.  Considering this was my 3rd time snowboarding the conditions were perfect.  I wasn’t the first one to pack the powder but the powder provided a nice cushion as I rolled down the mountain.  After a couple runs I became more comfortable and started learning to carve.  Rick spent the day “poaching powder” ruining fresh snow with his tracks no matter the obstacles.

Shortly after we arrived it started snowing and didn’t stop until around lunch when the sun broke through the clouds.  But within an hour the snow started falling helping maintain a nice layer of powder on the mountain.  The falling snow also seemed to keep the people away and we never had to wait in any lift lines.  By the time we headed back to the car we had no idea how much snow had fallen. 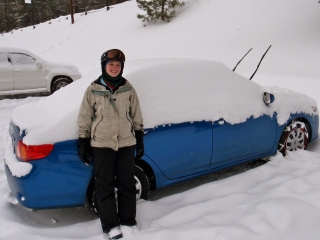 Being able to carve down the mountain and only falling a couple times makes me want to buy my own board.  Considering Mammoth and Big Bear still have a deep base of snow we hope to get at least one more snowboarding trip in this year.  We might even try cross country skiing again! 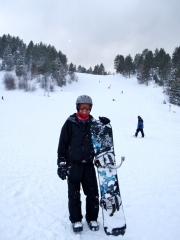 I survived another snowboarding trip!