You are currently browsing the monthly archive for February 2011.

Last weekend we visited my parents and grandparents in San Diego we also were able to check out the tide pools during a low tide. 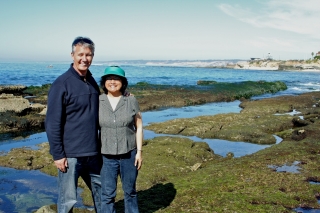 I’ve visited the tide pools many times in San Diego and I always find it interesting to explore each unique tide pool and watch for shells and anenomies to come alive. 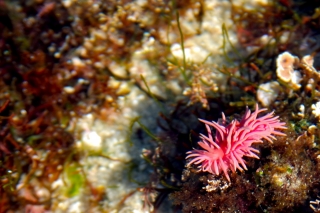 As we reached the rocks a young boy was yelling in excitement about a lobster he just saw.  I’ve only seen a lobster once before in a tide pool because they require a lot larger pools and it seemed this time there were more large pools which were more like long wide cracks in the rock and the water was still flowing in and out of them with each wave.

We passed the noisy and excited kid and found our own pool and within seconds I spotted an octopus crawling under a rock.  Once again it was unusual to see such a large animal most of the time it’s just small fish, crabs and anemones.  We stared and waited for him to come out but after a couple minutes my dad and Katharine moved to the next pool where they spotted another octopus.  This was incredible how could we see two octopus in one day let alone in 5 mins. 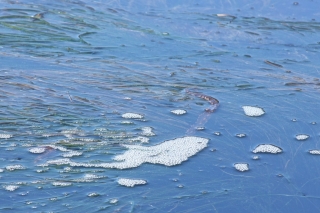 In the center is a Octopus tentacle breaking the surface

This octopus was hiding in the grass and at times almost looked almost as if it was tangled.  My dad crushed some mussels and threw them into the water to lure the creature out.  But to our surprise the meat fell to the bottom without being touched but then a lobster came out of the same grass to eat the mussels.  A lobster and and octopus in the same tide pool!  We watched the lobster cautiously grab the meat and race back to the grass then the octopus folded up and with one quick  motion darted out of the grass then out of sight.  Just when we thought all the fun was over something else moved in the grass.  We froze and crouched down not to cast our shadows across the pool.  Several pieces of mussels still lay in the open at the bottom of the pool.  Something was definitely swimming through the grass.  At one point you could just see the side of the animal which looked like a fish but before your eyes could lock on to it, it was gone.  Then to our surprise a head emerged from the grass.  It kept extending further and further it was an EEL! 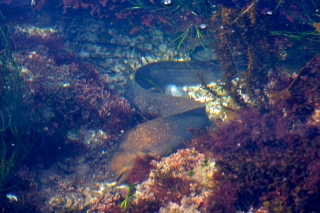 It snaked its way out into the open and pecked at the mussels.  I quickly snapped off a few photos wishing I had a polarized filter to reduce the glare.  The eel looked so evil with its beady blue eyes and unusual body.  Once it ate all the muscles it returned back to the grass.  Wow, an octopus, lobster and an eel all in one tide pool, that was a first.  I’ve never seen an eel in the wild and it also made me think twice about sticking my hand in the pools and feeling under the rock ledges.

We spent some time looking at the smaller pools looking at hermit crabs and anemones.  Katharine and my dad found a moving rock which they picked up exposed the foot of a large snail. 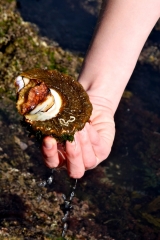 We also dropped some mussels into an anemone and watched it pull the meat in and close up around it. 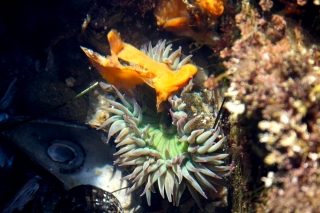 After searching all the tide pools to our surprise and Katharine’s disappointment we didn’t see any starfish.  Maybe next time. 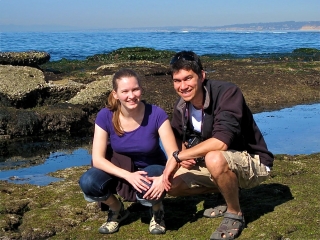 Inspired by a post at my favorite home design blog, Apartment Therapy, Nathan and I made a window sill planter from a gutter last year (or was it the year before?) in our kitchen window. We planted succulents and they did ok for a while, but apparently our kitchen window doesn’t actually get enough sun for succulents, so recently they’ve been looking rather wilted.

So a couple weeks ago, we headed to Anawalt, our favorite hardware/garden store and bought some shade-friendly flowers to refresh the planter. 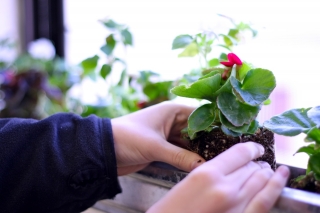 We chose a variety of begonias, hopefully they do well! Already they seem to be sprouting some new flower buds.

Overall, it has brightened our kitchen and is making me excited for spring! 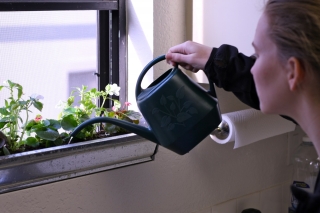 While in Arizona I went with Katharine’s uncle John and cousin William on a short drive and even shorter walk through Tonto National Forest. We only drove through the southern tip of the National Forest which is covered with saguaro cactus. 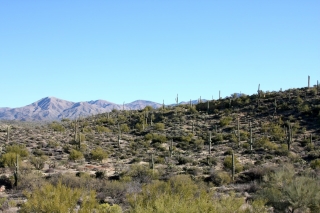 After seeing them littering the landscape sticking up like sparse trees I had to see one up close.

They are very unusual looking and their “branches” look like they could just fall off.

I think the west side of the red rock mountains would have looked incredible during sunset but our visit was short so maybe another time.

Since the holidays we have been trying to tackle a lot of wedding stuff. Although we didn’t really come close to finishing all the items on our January To Do List, we still have made some progress. We’ve tried out a bunch of rehearsal dinner locations and are considering two of them. We chose a hotel for all our out of town guests (pretty much everyone!) and we are meeting with a photographer this weekend. We have a few other projects in the works, but more on that later.

All this wedding stuff and putting together photos has made think about our trip to Wyoming and how Nathan proposed. For anyone who hasn’t heard the story, Nathan and I were in Jackson Hole, WY with my family to celebrate my parents 40th anniversary. We spent the week fishing, hiking, and generally enjoying Grand Teton National Park. Nathan had asked that we plan one day for ourselves to explore on our own, look for wildlife, and to allow him to take a gazillion photos without feeling rushed. Also, it was the perfect way to celebrate our 3 year anniversary. So I gladly planned a day for us… we took our time photographing some moose, we saw the famous Snake River overlook, we had lunch at a lodge by Jackson Lake, and then we did a walk/hike around Coulter Bay. 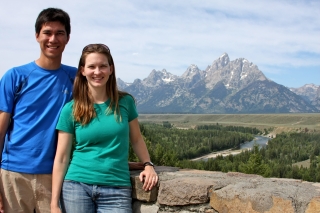 Little did I know that Nathan was planning to propose- he had already talked to my parents and brother about it, so I was the only one who didn’t know!  So on our hike around the bay, we stopped at a bench and Nathan set up the video camera. He told me that he wanted to get a shot of us looking at the mountains and the lake, but I thought it was silly and gave him a hard time about it. Luckily he didn’t let that throw him off and he got down on one knee and proposed with the most beautiful backdrop. And he got it all on video! So now you can share in the moment 🙂

All of our videos are on our youtube page.

We have started to put together our favorite photos from the past few years and are compiling them into a gallery. We started with our cross-country road trip in the summer of 2008. Nathan met me in Chicago and then we drove out together, hitting 5 national parks along the way. I think that trip is really what sparked our interest in hiking and camping and visiting the national parks.

We are still figuring out how to get wordpress to display our photo galleries the way we want, but in the meantime you can only view a slide show for 20 photos at a time, then you have to click to the next page for the next set. Maybe that’s their way of saying 20 photos is enough!

So check out our favorites. Enjoy!