You are currently browsing the daily archive for January 27, 2011.

Our third night, New Years Eve, we decided to brave the cold and camp at Upper Pines, nestled between Glacier Point and Half Dome.  After cross country skiing, we headed to the campground and picked out the perfect spot – but all of them were covered in 6 inches of snow. So we had to pack down the snow in the area covered by our tent’s foot print, which was huge since we brought our 5 person car camping tent.  It was actually kind of fun and had the added benefit of warming us up from all the exercise.

After many camping trips I would have to say Katharine and I are somewhat organized in how we store our camping gear and splitting up the chores.  Katharine sets up the sleeping bags and pads in the tent while I setup the stove and food supplies.  In normal temperature we can probably set up camp and start cooking our dinner in 20 mins but in freezing temperatures and snow covered ground we probably took 30 mins.

Around 4:00 we left camp to see if we could catch the sunset.   After waiting in an open snow field the clouds rolled in and blocked out any remaining sunlight as it set.  Sadly we never had a very dramatic sunset any of the nights we were there. So we headed back to camp and cooked dinner and sat around the campfire to keep warm. 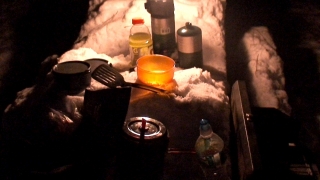 Around 9:00 we decided it was too cold to enjoy the night (or stay up for New Years) so we headed to bed.  At night the temperatures dipped down to ~25 degrees, freezing any water we had outside.  I woke up around 6 am because there was a sliding noise on the rainfly.  I laid in my warm sleeping bag debating whether to venture outside to see what kept falling on our tent.  Rain was predicted, but it didn’t sound like rain. Finally my curiosity got the best of me, and I opened the tent to find a new layer of snow on the ground.  Huge flakes were falling from sky building up on our tent then sliding off in big sheets.  It has snowed so much during the night all our foot prints from the night before were buried. 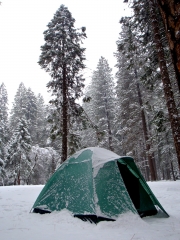 In anticipation for sunrise I woke Katharine up and we gathered my camera equipment and positioned ourselves on the road at the foot of Half Dome.  The snow continued to fall and the clouds were thick blocking out any sign of the sun.  I patiently waited with my camera covered in a ditty bag and Katharine read her book in the warm car. 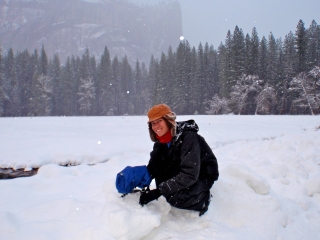 While I was bored I did experiment with slow shutter speeds capturing the cabin lights from Curry Village. 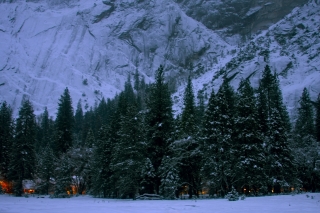 After waiting outside for over an hour my hands were cold and I finally conceded to the weather.  We also decided $8 would be a good investment for a warm breakfast at Curry Village. 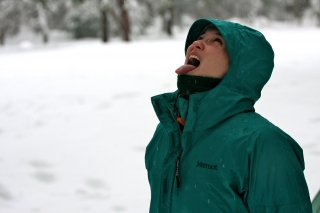 After the car was packed up, we rented snow shoes and headed to the Tuolumne Sequoia Groves. 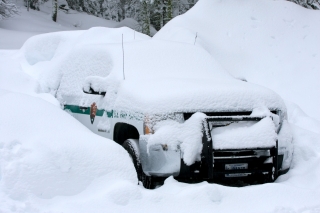 The parking lot was snowed in except for a snow plow, a covered park ranger truck and a couple empty spots

We were the first ones on the trail, stomping our way down a freshly powdered path.  After a short distance other people joined the trail but we were able to stay ahead of them exploring the winter wonderland accented with large sequoias extending above the canopy. 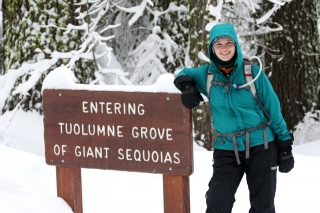 As we walked we could hear small thundering sounds which we soon realized were due limbs overloaded with snow dumping it down onto the next branch until it all crashed to the ground at the base of the tree. From afar it was amazing to see the heavy snow collapse to the ground followed by a light cloud of snow settling seconds after.  But before long the rumble was right next to us and there was no time to escape, especially with snow shoes. The minor avalanches never hit us directly since we stayed toward the middle of the trail.  Although I did get nailed while videotaping our trek, once we figure out how to get videos on this website we’ll post it. 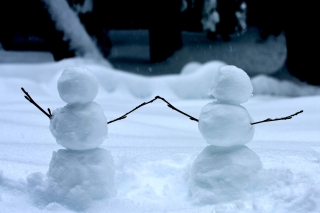 Miniature snowmen we made on our lunch break

We walked through tunnel tree and stopped and had lunch as other people started coming down the trail exploring the hidden trails.  The temperature was rose above freezing, melting the snow as soon as it landed on us.  With a mile left to hike up hill we headed back to the car. 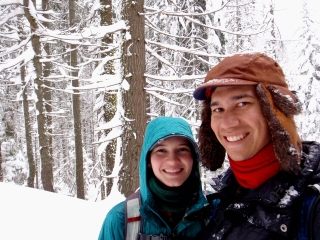 We had a memorable trip and a great start to the New Year.

Check out the rest of our photos from the trip!