You are currently browsing the daily archive for January 22, 2011.

Day 2 started early in a hotel room just outside the park.  The night before we made sandwiches and filled our Camelbacks for our cross country skiing adventure.  Before the sun was up we hit the road at 50 mph going over hills and around the deserted corners, but then we came across the dreaded sign “Chains Required”.  Maybe it was just us, but we struggled to get our chains on the first time and messing with spring loaded metal cables in 15 degree temperatures is not what I want to do at 7am.  We pulled to the side of the road and untangled the chains.  At least this time it wasn’t in a parking lot full of people all doing the same thing trying to race each other into the park.  I took off my gloves and draped the chains over the tire trying to connect the hooks as fast as possible before my hands froze.  Miraculously the hooks engaged without me having to pull with all my strength and embarrass myself in front of Katharine.  It didn’t help that our chains were brightly colored and looked like toys more than life savers. (Well, they actually did look like lifesavers, the candy) 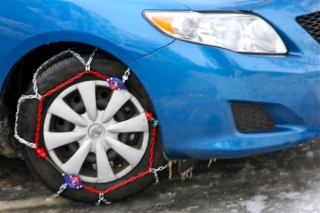 The second tire also went smoothly –  I guess the chains just needed to be worked in- and then we were on the road again.  Of course now we were traveling at 25 mph and the car was vibrating vigorously from the chains.  Soon we gained enough elevation to hit the snow line and found ourselves in a winter wonderland.  Driving at night was impressive but early in the morning with the sun reflecting through the trees it was breath taking.  We came across a look out point which gave us a great view of the Valley, El Capitan, and Half Dome.

I did get to use the GorrillaPod to capture the morning light. 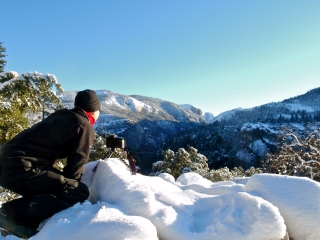 Something to keep in mind with a little tripod: you’re going to have to get close to the ground.

We were headed to the Badger Pass Ski resort (downhill and x-country skiing), but to get there we had to pass through several tunnels which were guarded by massive icicles.  It looked like entering the mouth of a monster.  It also made for a short adrenaline rush as we passed under them hoping they wouldn’t fall. 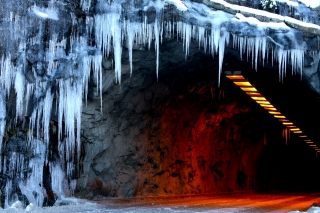 After winding our way through tall snowdrift-lined roads we arrived at the ski resort.  We opted for the 2 hour lesson which proved essential.  It looks so easy, two skies slowly gliding along in groomed tracks no less, but in actuality it’s pretty easy to fall and it takes a lot of effort if you don’t use good form.  After the lesson we continued skiing up the trail to the older Badger Pass slope.  The lesson didn’t cover the steep hill we slowly inched up and it most certainly didn’t prepare us for the “ride” down. 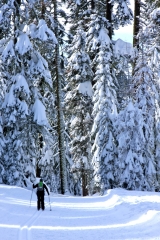 I think Katharine got the hang of it- sliding down somewhat controlled while standing up.

I tried a more tuck-and-roll method which entertained a few snowshoers waiting for me to get out of their way.  I am guessing this is why we don’t have any video and not too many photos of the event.  By the time we got to the bottom we had figured it out but it was time to head to the campsite for New Years! 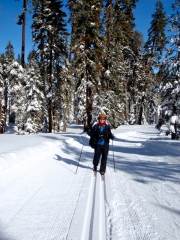 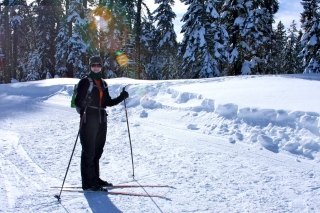 Since I have never been to Yosemite, I didn’t know what to expect and especially what it would look like in the winter.  Since we were car camping I didn’t need to pack light so I basically brought every piece of camera equipment I owned.  It was a great chance to test out the new equipment that I got for Christmas: the GorrillaPod SLR and the Cotton Carrier .

The first day was right after a storm so the skies were clear which made it easy to photograph the amazing rock formations that lined the valley. 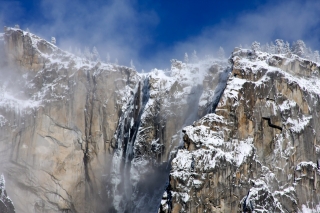 My preference is taking photos of animals but in the winter it was hard to find any without hiking off the beaten path.  All we saw were coyotes and deer although we heard reports of a bobcat and mountain lion sightings.  Even though I wasn’t stalking animals and hiding in the brush the landscapes were breathtaking enough to keep my attention.

The Cotton Carrier harness worked great for hiking on the icy paths allowing me to have two hands to catch myself if I slipped or fell.  Some of the paths were being flooded by the melted snow creating free formed rivers under the snow.  It was nice not having a 5 pound camera swinging from my next as I jumped from snow pile to snow pile trying not to sink my foot in the freezing water.  I was also able to take some macro shots of the winter taking hold on the last green vegetation. 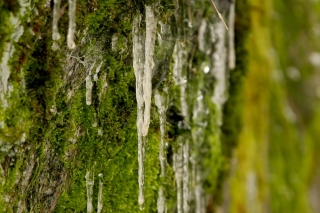 On our next visit, I would like to spend more time setting up some of the landscape shots and now I know where all the view points are I won’t feel as rushed.  When we first arrived we were so excited we kept just pointing and driving from one view point to another “look at that”, “look over there” because everywhere you looked it was an amazing sight. And it was easy to think we could just get some of the shots the next day. But in the winter you can’t take the clear skies for granted.

Nathan and I went to my parents’ house in PA for Christmas and my maid of honor Kara threw me a wonderful bridal shower! It was a pretty laid-back affair, but it had the most important thing: friends and family. Only one of my close friends couldn’t make it, and my grandmother hosted the event at her awesome house. 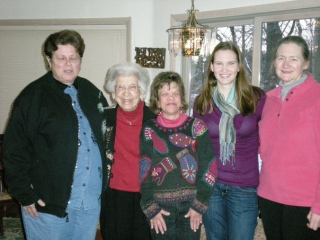 We didn’t play a lot of silly games because that isn’t our style, but Kara did ask Nathan a bunch of questions about himself and us beforehand so that they could quiz me to see how similarly I would answer. For any answer I got wrong, I had to eat a gum ball (which wouldn’t have been so bad except these were some really old gumballs haha). In the end, I thought I did pretty well. She asked what superhero he’d be – I answered Superman because I didn’t know many superheros which was exactly what he wrote. If stranded on a deserted island, we both would choose fire starter as our one thing to bring.  We both remembered that we had our first kiss while watching the Cosby show and I knew that if he had to compare me to an animal, he’d go with a mole. (I’m not really a morning person… and I’m super blind without my contacts.) And I knew his dream car was a Toyota Tacoma… although since our Yosemite trip I think we’ve decided a Subaru Outback would be better 🙂

Still, Kara and Nathan stumped me on quite a few and I ended up with one hell of a wad of gum! I guessed his favorite food was milk and cookies while he said steak and mashed potatoes. I didn’t know his favorite movie (Sandlot or Top Gun) although he later agreed my guess (Love Actually) was also good. If he were an animal, he would not be an eagle, but rather a hawk (I still contend that this was close enough, but Nathan claims he purposely did not pick eagles because they are known to be scavengers.)

And there were a few questions that Nathan answered very sweetly, reminding me why he’s such a keeper 🙂 For what outfit he most likes seeing me in, he answered “Boots, wool socks, hiking shorts, ice breaker shirt, gray hat and a backpack…because that means we’re on an adventure, having fun and just enjoying being together.” And his favorite thing about me? We’re best friends and I can be myself around her, she picks me up when I am down, corrects me when I am wrong, but loves me for who I am.  I could say the same about him!

The rest of the shower included my family and friends showering me with awesome kitchen gifts – thanks! and I got a great collection of recipes.  Plus, Kara made a kickass pumpkin spice cake which was delicious. yum! (and she could probably be a professional cake decorator, don’t you think?) 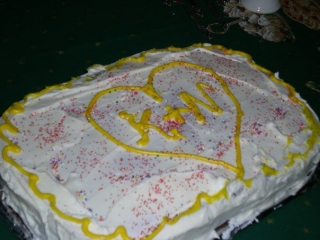 Afterwards, my friends and I headed to the only bar in Hockessin, DE (it is quite the place to be, let me tell you!) and had some drinks and fun catching up. All in all, it was a wonderful shower – Thank you Kara! 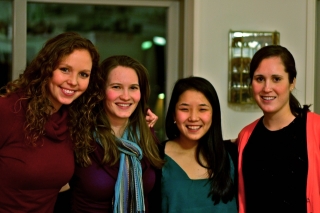