As planned, Nathan and I spent the second half of our winter break in Yosemite National Park. Generally when I plan trips for us, I like to have the basic schedule for each day laid out so that we can be sure to fit in the best parts. But for this trip everything depended so much on the weather conditions that we had to just wait and see how things would turn out.

We first entered the park on Thursday morning, a beautiful day with bright blue skies, but freaking cold!! The day/night before had left a fresh layer of snow on everything, giving it a bit of a magical feel. All the meadows were speckled with snowmen that kids had made throughout the previous week, but now they each had a fresh dusting making them sparkle. Soon we came upon El Capitan… what a sight to start the day off with: 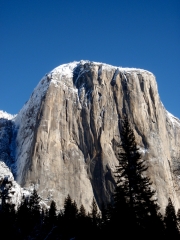 As we were heading back to the car, we were surprised to see a coyote not far from the road. I think he was enjoying the fresh snow. Nathan thinks he was trying to trade photo ops for food. 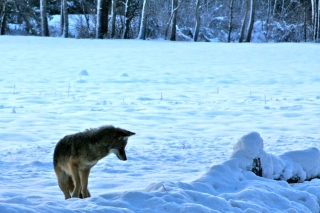 We then drove deeper into the valley, stopping at various pullouts to photograph the amazing views. With the blue sky, fresh snow, cliffs, and waterfalls it was impossible to take a bad picture! We also took a break for a snowball fight. 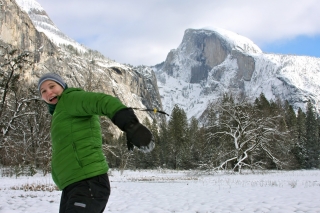 Next, we visited the ranger station to get some info on what was open and where to rent skis/snowshoes, then enjoyed a couple hotdogs from the deli.

Our original plan for the day was to do a relatively long hike around the valley, but it was so cold and we were feeling a little sluggish, so instead we did a short hike to get some better views of Upper and Lower Yosemite Falls. By this point in the day we were happy to have our ice traction devices on our boots because all the paths were super slippery – They were a sweet Christmas present from my awesome Aunt Lisa! And I noticed they were the same kind that the locals were wearing. In any case, we made it through our short 2 mi hike because of them, and got to see some amazing views of the Falls. 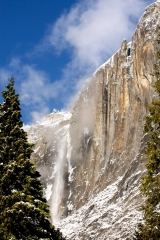 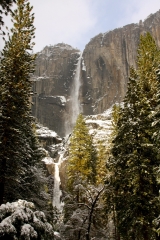 The only bad part about doing this type of trip in the winter is that the days are soo short, and before we knew it, darkness was approaching. The ranger had told us it would be 13 degrees that night, so we had decided not to risk camping and instead planned to head back to our hotel in El Portal. However, while we were in the park, a rock slide had occurred on the road to El Portal and they had closed the road. We later found out that one huge boulder about the size of my car had fallen into the road. Luckily no one was injured! And lucky for us, there was one bar of cellphone service at the road block so we were able to find a new hotel in a different town that wasn’t too much farther away. The drive there was quite an adventure though… we had to go up and over a pass through the mountains and there was considerably more snow in the trees and on the road. The snow banks along the road were taller than my car!! Here’s what it looked like heading back the next morning. 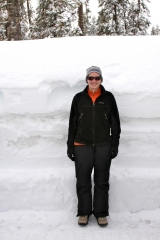 But we made it safely to the hotel and got a good nights sleep so that we could get an early start in the morning.