Every year we fly to Pennsylvania and spend Christmas with Katharine’s family, and every year I catch a glimpse of a red fox running through their backyard.  Their kitchen and living room have large sliding glass doors that act as the perfect wildlife blind overlooking a small creek bordered by trees and a small open meadow, half of which is overgrown with by multi-floral roses and tall grasses.  During the winter the trees have lost their leaves and expose the animals that are running through the meadow and along the creek.  Of course since I only visit once a year my view of the East Coast is a cold and dormant environment. 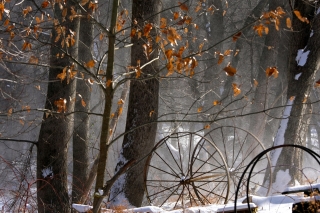 Armed with my Canon DSLR 40D and 70-200mm telephoto with 1.4x extender I was prepared to get a photo of the elusive fox.  My goal was to spend a couple hours each day waiting outside for the fox to pass by.  Of course the first day I was there I was peering out the window and saw my target crossing the creek.  I ran for my camera and out the door but by the time I got in position he was gone.  Every morning I diligently scanned the brush outside as I drank my coffee, contemplating how I was going to get the perfect shot.

On Sunday evening a large storm hit the area but only dropped a few inches of snow at Katharine’s parents house.  The next day I put on several layers of clothing and hid under their deck waiting for the fox.  The temperature was hovering around 25 degrees but felt much colder as the wind whipped up the snow and blew it in my face.  After waiting perfectly still for almost 2 hours as my hand froze to my metal camera body I became bored.  I began to photograph the song birds at the bird feeder which of course was easy pickings compared to my ultimate goal.  After a while the sun started to set dimming the light beyond my cameras limits so I headed inside.

Tuesday was our last day so I went to sleep early to wake up before sun rise and position myself to catch the fox on it’s morning hunt.  I figure with the wild cold winds the day before maybe the fox would have stayed in it’s den but would try to venture out today.  I walked along the creek and found many fox tracks running back and forth but they seemed to all pass a large tree near the edge of their property line.  I figured this would be the spot so I put the tree between the creek and myself and waited.  The sun started to rise and every few minutes I would slowly peer around the tree and look for any movement.  One hour went by without any signs of life in the meadow.  After 90 mins passed I took another look around the tree and to my surprise I saw movement in the tall grass.  It was slight but I could tell it was something bigger than a rabbit or cat.  I took aim with one eye through the camera and the other watching the grass.  Nothing was moving, where did he go, was I just imagining things?  Then I saw it again just for a few seconds.

Can you find the fox?

I saw a dark foot slowly lift from the snow pause then step forward.  I knew it had to be the fox- I waited a minute until his small red head peaked out of the brush. HA, I screamed in my head!  I finally got him!  My finger squeezed my camera and my shutter sounded like a machine gun rattling off several photos.  The fox, already cautious, paused and looked up toward me every time my shutter blades closed. 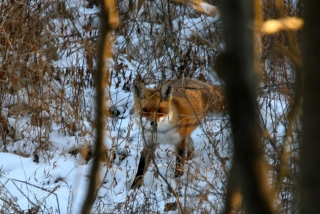 I paused and he paused then he took another step and I took another photo then he would pause.  We continued this game back and forth as he crept down toward the creek.  I couldn’t believe how close he was getting, and then he moved so that the tree I was hiding behind blocked my view.  I rolled around to the other side and looked around the tree, but he looked up, saw me, and bolted.  I quickly swung to the other side of the tree but he was gone.  Dang!  If only I had waited maybe he would have come closer.  I will always wonder, but for this trip I was more than satisfied that I got so close and was able to get a photo that can be recognized as a fox. 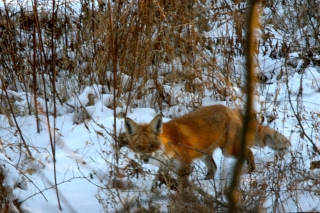 Hopefully next year I will have the patience to let him walk out into the open meadow or come to the creek for a drink.  It was quite a rush and I can see how it could be fun to be a wildlife photographer.